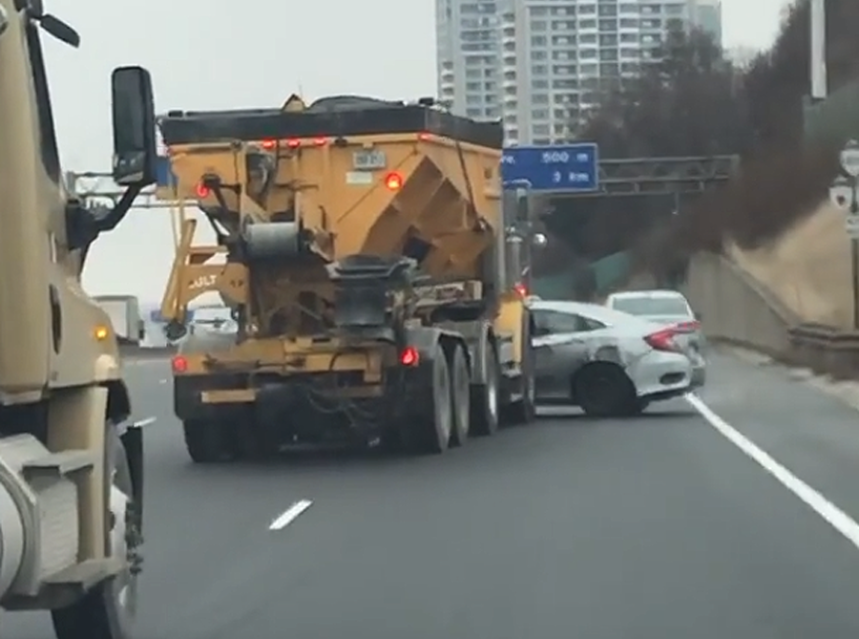 TORONTO, January 15, 2020 – Still under investigation by OPP is a crazy incident on the 401 in Toronto caught on video and posted by Cory Wells on Instagram yesterday.

In the dash-cam video, taken on January 13, a stone slinger truck pushes a sedan sideways along the 401 westbound collector lanes near the Yonge-Bayview exit. The stone slinger then proceeds to move the car against the guardrail, crunching its bumper and knocking off the sedan’s sideview mirror in the process.

Then a tractor trailer seemingly following in the same trajectory of the salt truck comes close to swiping the car against the guardrail. It is not yet known if the driver of the tractor trailer was attempting to shield the action in order to prevent a further collision or also trying to side-swipe the sedan.

In a second video added to Wells’ post it appears that the stone slinger truck pulls over to the side and the driver gets out of the vehicle to run back towards the car he had moved to the shoulder. Also, in the video, a bystander appears to pull over, get out of their vehicle and run across to the sedan against the guardrail.

OPP Sergeant Kerry Schmidt told CP24 that the truck driver has more explaining to do. The driver says he was changing lanes.

The driver of the sedan that was going sideways, a 40-year-old male (initially reported as female) from Scarborough escaped with minor injuries according to OPP Sergeant Schmidt.

Following up afterwards in an interview with Global News, the driver told Sergeant Schmidt “he was driving along and he saw this stone-slinger truck beside him, squeezing towards him. He moved over to the right and actually got close to that transport truck that you also see in this video, and before he knew it he was sideways in front of that yellow dump truck that was pushing him sideways. He was blasting the horn; he was screaming at the top of his lungs; screaming for his life essentially, because as he sees himself getting pushed down the highway towards that guide rail he didn’t know if this was it for him. And it was a terrifying experience for him.” I spoke with him just this morning and hew was shaken up and taking some time off from work to kind of recollect his composure. But fortunately no serious injuries.”

“What the truck driver was thinking or doing I don’t know,” Schmidt told Global News, “and we still have some investigation to follow up on.”

“You can see him going clear across all lines right off onto the shoulder until he essentially scrubs this car off of his bumper into the guide rail and goes another hundred metres or so down the road before he finally stops. What was going on in his mind I don’t know,” said Schmidt. “He claims he didn’t see the vehicle, I don’t know but we are going to follow up on that.”

When asked if is is possible the truck driver did not see the sedan, Sergeant Kerry Schmidt went on to say “we have seen situations where trucks have collided with cars and the driver has not seen the car either in front of them, beside them or even behind in their trailer, so it is not without precedent but usually the driver will stop quickly when made aware of the situation.”

Toronto Times has also learned something perhaps similar happened to Mississauga resident, Lori McLorn a couple of years ago.

“The passenger side footboard of the truck locked in my back wheel on the driver’s side and swung me onto the front grill of the truck which then pushed me 30 feet down the road,” said McLorn, host of “Chewin’ the Fat with Lori McLorn” on Sauga960 AM.

“The driver couldn’t see my Civic sedan attached to the grill. I was on Kipling just north of the Queensway. It was so scary and my car was totally destroyed. The driver side was so damaged I had to be pulled out from the passenger side,” said McLorn.