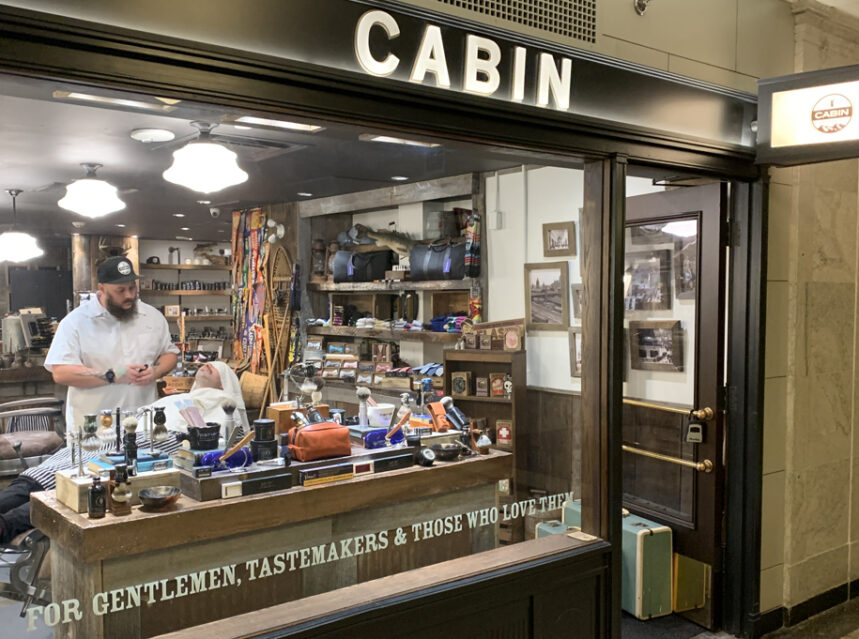 CABIN at Union Station is the third location to open in four years springing from their hugely successful Port Credit and Queens Quay locations. Owner Louie Manzo was inspired by his father, himself a barbershop owner, to open the original CABIN. The Port Credit location oozes a rustic and rugged hunting lodge vibe complete with a wood-burning fire, antlers on the wall and every manly grooming accoutrement and clothing accessory imaginable. Oh yeah, you can also spin your favourite vinyl on their turntable.

Manzo, who is already actively involved in the Port Credit community, with charities and other successful local events, explains in an interview with Perry Lefko for GoodLife Magazine back when he opened the first CABIN location in Mississauga in 2015.

“I call it the rebirth of cool,” he says. “There’s been some great barbershops that have been in business for 10, 12 years that look and feel like old-school barbershops. They were the re-birth and we’re in the middle cycle of that where a place like Cabin begins to change people’s behaviour. Guys are coming in more frequently. They are putting more effort into the look. They’re making sure it’s finished, it’s manly. It’s a statement for them. We’ve got gents that are coming in here once a week for trim-ups and that’s something that would have happened in the ‘30s and ‘40s and even earlier.

“Old school barbershops like my father’s,” Manzo goes on to explain, were “more of a social convenience where guys would meet on a specific day or a night and share camaraderie. They would have a place where hang out and feel comfortable. They would maybe have an espresso or a coffee, maybe a bet on the ponies. It was a social-engagement place and at the same time they did something that was necessary, which was clean up. Cabin was built on the premise that this is a place for us together – a safe haven.”

In his video greeting on cabinforlife.ca, Manzo captures the charm and inspiration behind the CABIN.

“Barbershops play an important role in our lives. Historically, they have been everything from a meeting place to a place to simply get a trim up or clean-up. I liked the idea of having a shop that can offer something we have lost along the way, which is a chance to slow down and spend time engaged. I wanted to create this habadashery, bring back the idea of a gentleman’s accessory store, a cigar shop, a grooming shop, where gentleman can mix socially, collaborate and share and exchange ideas. That’s what CABIN really is.

“It’s a number of pieces of a bigger puzzle that doesn’t have one specific definition. CABIN has to be exactly what it says it is. Imagine going to a cabin in the woods. You expect to be comfortable, to create memories. You want to feel invited and you want to relax. And this environment is no different. It is named Cabin for that specific reason. You expect that you’re going to have have an enjoyable visit, where you’re going to create memories and CABIN from the floor to the walls is meant to do that. It’s not like anything else.”

Manzo really captures the experience in the video.

When you walk in to the Union station location you are immediately made to fell welcome and at ease – in this case by a friendly gent named Reid, decked out in a black and red check lumberjack style shirt. Manly scents of pine and musk, and shaving products, combine with the rustic visuals of old rough-hewn shelving, vintage felt souvenir pennants, duffel bags, funky hosiery, bow-ties, hats, merch, coasters, and a bevy of Canadian men’s grooming products.