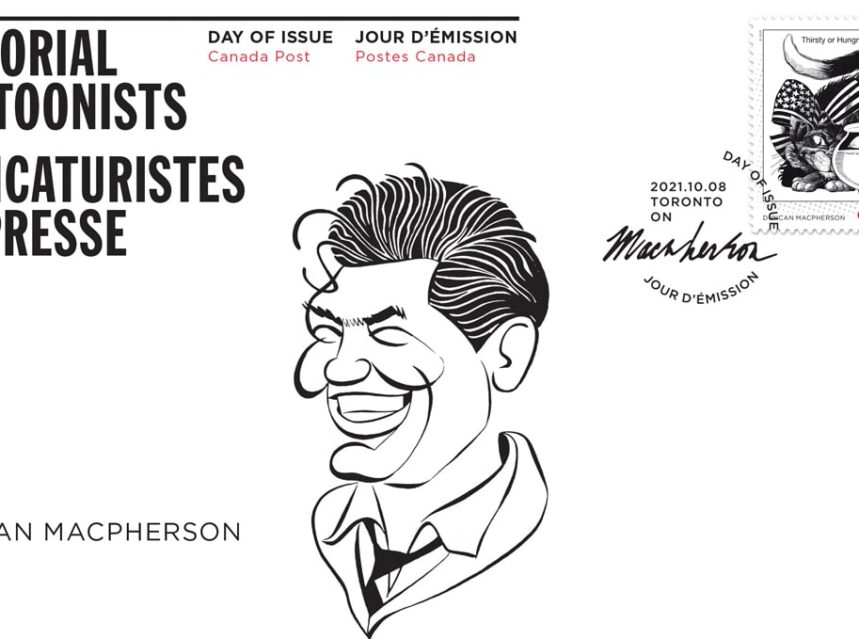 TORONTO, ON, Oct. 7, 2021 – Canada Post today unveiled a stamp paying tribute to Toronto cartoonist, Duncan Macpherson (1924-93), who is widely considered one of the most influential cartoonists in Canada.

An editorial cartoonist for the Toronto Star for more than three decades, Duncan Macpherson drew witty cartoons that challenged what he called “wrongness” on behalf of everyday Canadians. Macpherson also helped reshape the profession for a generation of cartoonists by being the first to hire an agent to negotiate his salary and by pushing for editorial independence. Sometimes, his cartoons opposed the editorial stance of his own newspaper.

“Having dad honoured in this way revives his memory and his name. I’m so proud of his achievements,” says his son, Ian Macpherson. “For me personally, this rediscovery of my dad’s work and its influence has been a terrific experience.”

The first editorial cartoonist to be invested into the Order of Canada, Macpherson received six National Newspaper Awards, the Royal Canadian Academy of Arts medal and the Canada Council for the Arts Molson Prize. He died in 1993 at age 68.

The Editorial Cartoonists stamps and collectibles will be available on canadapost.ca and at post offices starting October 8.

About the stamp issue

Canada Post’s newest stamp issue celebrates five of Canada’s greatest editorial cartoonists, whose thought-provoking and seminal work has helped shape our national fabric over the last half-century. The five award-winning cartoonists, each honoured with their own stamp, are some of our country’s best journalists and storytellers. Their powerful drawings have been important fixtures in some of Canada’s most prominent and influential newspapers for decades.

Armed with pencils, ink and razor-sharp wit, these editorial cartoonists have boiled down complex issues into a single image – providing pointed commentary on important domestic and world events. Challenging the status quo and tackling controversial subjects head-on, their work has transcended politics and played an important role in upholding Canadian democratic freedoms.

These talented Canadian artists have made us laugh, reflect and cry with cartoons that tap into the emotions of a country. Their combination of humour and art has enlightened and entertained us, contributed to national debate, and brought attention to unfairness and injustice. Canada Post is proud to honour their enormous contributions to Canadian media and society.