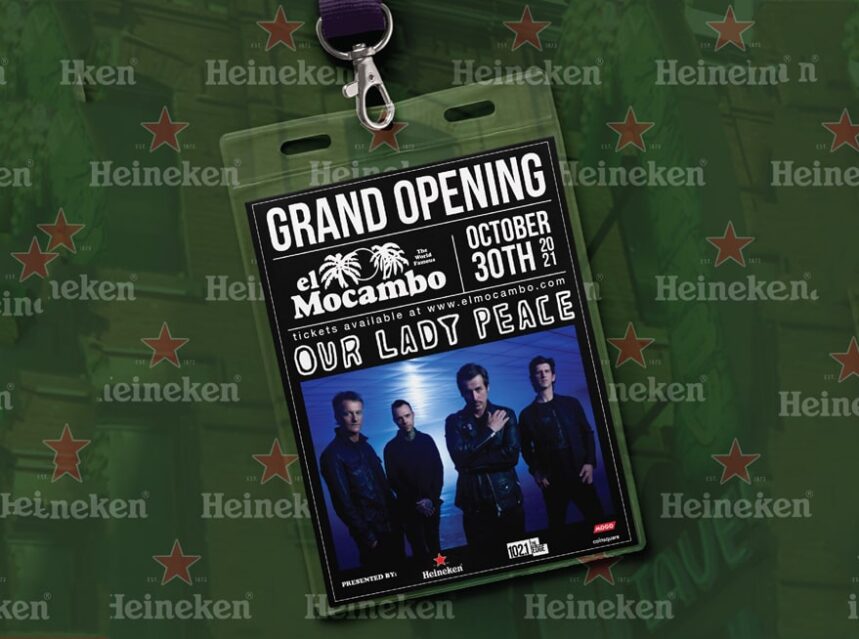 Toronto, ON, October 7, 2021 – El Mocambo Entertainment Inc. along with Michael Wekerle, owner of the beloved El Mocambo just announced today that the legendary venue will welcome the return of major live music events and officially reopen its doors on October 30, for an exclusive live concert experience headlined by award-winning, multi-platinum alt-rock band Our Lady Peace.

Described as an “ultramodern broadcast studio with a liquor license” (Globe and Mail), the El Mocambo is set to revolutionize the live music business by blending cutting-edge technology with unparalleled access and an eclectic range of shows – offering audiences, fans, and music lovers the ultimate live experience across two separate venues all under the same roof.

Tickets for the grand reopening event presented by 102.1 The Edge and Heineken go on sale Thursday, October 14 at 10:00 AM ET at www.ticketmaster.ca with a limit of 2 tickets per person. Also, important to note is that the capacity is limited due to current Covid-19 restrictions.

“Growing up in Toronto it was impossible not to know how legendary the El Mocambo was,” states Raine Maida, OLP. “I always loved hearing from another person claiming to be at that infamous U2, Police, or Rolling Stones gig when everyone knew there were only a handful of people actually there. Those famous neon palms are rock royalty and to be a part of the reopening, lighting up Toronto and playing under the palms again is an honour!”

The grand reopening event marks the resurgence of the iconic El Mocambo following the closure of the historic Toronto entertainment venue announced in October 2014. In 2015, the El Mocambo began extensive renovations to repair the aging building and create a fully modernized performance and event space. The intimate ground-floor stage and the second-floor mainstage remain in the same locations, but both now offer improved sightlines and exceptional lighting, video, and acoustics.

“We are thrilled to welcome OLP and their fans back home to The El Mocambo in what is sure to be a special evening,” said Michael Wekerle. “Music is the thread that unites us all and we have been working diligently to bring new and meaningful experiences to music lovers, while creating opportunities that work to support artists, fans, communities, and the entertainment industry at large. The El Mocambo is synonymous with connecting artists to their fans, and we are passionate about making the experience great for everyone involved. We can’t wait to see OLP on stage and fans in the audience at a concert – in a place where they can connect like no other experience.”

The iconic venue – wired to deliver music to fans and audiences globally, boasts three acoustically tuned performance areas, state of the art video, audio, lighting, and production capabilities in addition to the highest safety standards in terms of building construction. New additions include a third storey soaring mezzanine, and mobility friendly access, along with the largest studio floor on the eastern seaboard.

Last summer, OLP released the first track off the forthcoming album, “Stop Making Stupid People Famous” featuring Pussy Riot with a video to pair. The track is a reflection on celebrity influencer culture and how it has weakened the fibres of society. The choreography-ladened video uniquely contrasts the tongue-in-cheek nature of the song with carefree and colourful visuals, highlighting young activists and leaders that society should be making famous.

To commemorate the grand reopening, with each ticket purchased fans will have a chance to not only see their favourite band in an intimate venue but will also receive an NFT high-quality audio copy of OLP’s forthcoming new album ‘Spiritual Machines II’ ahead of its official release.

In addition, the ticket bundle for OLP at the EL MO will include: