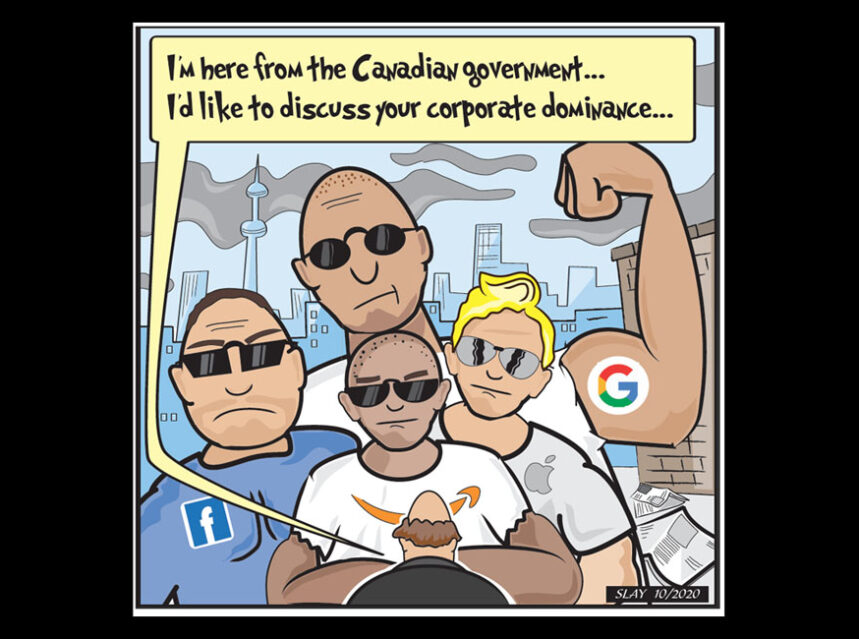 Canada’s news media want feds to address Monopolistic Dominance of Web Giants, recommending Australian Model which includes: A code-of-conduct to ensure that the web monopolies do not use new algorithms and other proprietary technology to expand their market domination and entrench unfair competitive practices

TORONTO, Oct. 22, 2020 /CNW/ – Canada’s news media publishers today called on all political parties in Parliament to support the adoption of Australia’s approach to combat the monopolistic practices of Google and Facebook.

In Canada, as in democracies around the world, the two American web giants control the lion’s share of online advertising dollars and distribute newspaper content without compensation. The model being implemented in Australia counters these monopolistic practices and levels the digital playing field – at no cost to taxpayers and without the need for user fees or other charges.

The recommendation that Canada adopt the Australian model is contained in Levelling the Digital Playing Field,a report commissioned by News Media Canada and prepared by FTI Consulting, a global advisory firm, who conducted an in-depth analysis of actions taken in democracies around the world to address the same challenge.

“A strong, diverse and independent news media is valued by Canadians and crucial to our democracy,” said Jamie Irving, vice-president of Brunswick News Publishing company BNI and Chair of News Media Canada’s working group. “Publishing real news costs money, and Google and Facebook – two of the biggest companies in the world – cannot continue to be allowed to free-ride on the backs of Canadian news media publishers who produce news content, without fair compensation. We have heard the global web giants’ hollow commitment to journalism and to token compensation. The time to tackle the global web giants, as the federal government indicated in September, is now.”

Key elements of the Australian model include:

According to News Media in Canada, Google and Facebook control 80% of all online advertising revenues.

“The unchecked power and market domination of Google and Facebook has impacted news media around the world and Canada faces the same challenge,” said Jamie Irving. “This is above and beyond concerns about their abuse of the privacy of citizens and their role in the spread of disinformation. Canada has a responsibility to demonstrate leadership on these important issues.”

The Government of Canada announced in its Speech from the Throne of September 23rd that, “The government will act to ensure their revenue is shared more fairly with our creators and media, and will also require them to contribute to the creation, production, and distribution of our stories, on screen, in lyrics, in music, and in writing.”

News Media Canada is calling on the government to tackle the web giants and adopt the Australian model in Canada.

The CEO members of the following companies are leading the discussions with the government of Canada including Glacier Media, Black Press, Torstar, Postmedia, Globe and Mail, La Presse, Quebecor and Brunswick News.