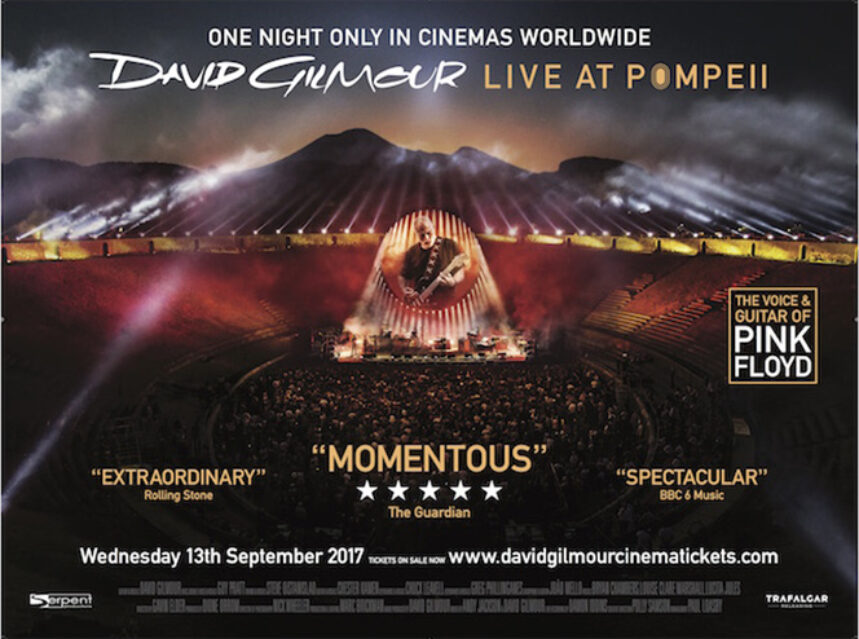 David Gilmour Pompeii – Cineplex Events is bringing audiences to their feet once again with David Gilmour Live at Pompeii in Cineplex theatres across Canada. This unique and exclusive concert experience is screening for one night only on September 13, 2017.

On July 7th & 8th 2016, David Gilmour performed two spectacular shows at the legendary Pompeii Amphitheatre in the shadow of Mount Vesuvius. The shows took place 45 years after he first played there for Adrian Maben’s classic film Pink Floyd Live at Pompeii. David Gilmour Live at Pompeii, will include highlights from both shows, filmed in 4K by director Gavin Elder and will be presented in Dolby Atmos sound.

The concerts were the first-ever rock performances played to an audience in the ancient Roman amphitheatre, which was built in 90 BC and entombed in ash when Vesuvius erupted in AD 79.  David Gilmour is the only performer to play to an audience in the arena since the time of the gladiators, almost 2,000 years ago.

A spectacular audio-visual experience, the film features a huge circular cyclorama screen as well as lasers, pyrotechnics and stellar performances from an all-star band.

David Gilmour Live At Pompeii shows an artist at a creative peak, in a unique setting, on a very special occasion and is not to be missed on the big screen.