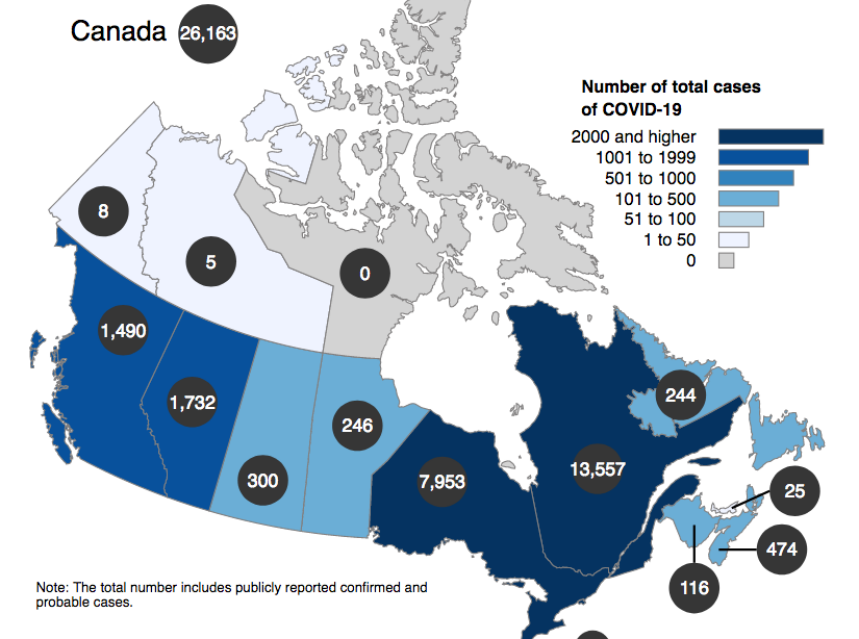 Of the 43 people who lost their battle with the virus, a shocking number were all at one long-term care home. It was announced late Monday that 25 residents at Eatonville Care Home in Etobicoke had passed away due to the COVID-19. There are also 49 more confirmed cases in the facility with six more pending.

“Today’s increase in our COVID-associated deaths is a reflection of changes in provincial testing criteria. Public Health has confirmed that nine residents, who had previously passed away due to unknown causes, have now been attributed to COVID-19,” said Evelyn MacDonald, executive director of the Eatonville Care Centre, in a statement Monday. McDonald also said those nine are not figured into the 25 new COVID-19-related deaths.

Ontario continues to be well off its goal to take 8,000 tests daily starting tomorrow as over the last 24 hours the province conducted 4,852 tests.

Public health officials said today there are 2,107 cases under investigation and the hint of good news is that the number of hospitalized patients in Ontario due to the virus has only increased by nine from 760 to 769. While the number of patients in ICU yesterday dropped from 263 to 255. Today, there are 199 patients currently on ventilators, which is also down 4 from yesterday.

Meanwhile today, Premier Ford announced that the State of Emergency in Ontario will be extended another 28 days to May 12th and could continue “As long as seniors and our most vulnerable are at risk.” Yesterday Ford said the first priority is to have every person living and working at long-term care homes as well as all frontline workers tested, but today he explained 108,230 have been tested in Ontario so far.

Premier Doug Ford said Tuesday that the province will “redeploy every resource” to long-term care homes. “My top priority right now is getting the troops and resources needed at this front,” said Ford.

Greater Toronto Area public health units now account for 54.9% of cases, while within Toronto, as of yesterday there are now 2,362 confirmed cases of COVID-19 including 92 deaths reported by Toronto Public Health. There are 210 people hospitalized in Toronto, and there are 80 people in intensive care units.

The Ontario report includes the most current information available from the integrated Public Health Information System (iPHIS) as of 4 p.m. April 13, 2020. While the Toronto Public Health report is from Dr, Eileen de Villa at 3:45 pm yesterday.

Today, Prime Minister Justin Trudeau said reopening Canada’s economy as the COVID-19 crisis subsides will be undertaken as a phased-in approach and he also reaffirmed that it will be many weeks still before business and school shutdowns will begin to be eased off.

Canada saw a big jump in reported cases from yesterday with 1,359 more cases of COVID-19 bringing its total to 26,163 including 89 more deaths, bringing the national total of deaths up to 823. With 360, Quebec has sustained the most COVID-19 related deaths in Canada while Ontario has now had 334 coronavirus-related deaths. British Columbia had eleven recorded deaths yesterday and remains at 69 reported deaths due to COVID-19. Quebec by far is surging with the most cases of COVID-19 with 13,557. Ontario is second highest at 7,953 and Alberta is ahead of BC with 1,7,32 cases while BC now has 1,490 and the rest of the provinces have 300 cases each or less with Saskatchewan the highest of those provinces at 300.

Worldwide today, there was a smaller jump than yesterday with 207,604 more cases today bringing the total up to 1,978,769 cases of COVID-19 as of 4:30 pm April 14, 2020 as reported by the Johns Hopkins University. Of those cases there have been 6,577 more deaths bringing the death toll to to over one hundred twenty-five thousand worldwide with 125,123 deaths.