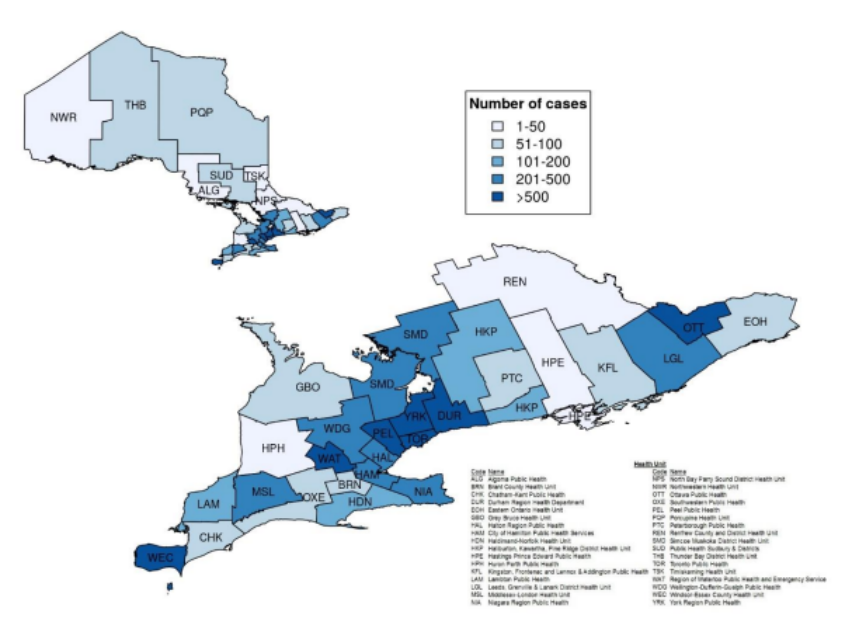 TORONTO, ON., April 29, 2020 – The Ontario Ministry of Health has reported some encouraging numbers today with fewer confirmed new cases since April 6th and fewer COVID-19 related deaths than the previous few days. After a yo-yo-ing of case counts over the past several days with Ontario reporting a record-high 640 cases just six days ago, the Ministry of Health has now posted a single-day total of just 347 newly reported cases and this comes after previous totals of 476, 434, 424, and 525 respectively.

It is very important to note that Ontario government officials have said that we will need to see a two-to-four week decline in both new cases and new hospitalizations before provincial restrictions can begin to be eased off.

Also today, when asked about the prospect of cottage season about to begin, Dr. David Williams, Ontario’s Chief Medical Officer says the province is trying to assess the risks of going up to the cottages. Risk of infection in smaller communities is a major concern, along with the more rural healthcare systems not being able to handle additional patients if cottagers go up and then develop symptoms.

Sadly, today Ontario reported another 47 new deaths but that is fewer than the daily record-highs of 59 and 57 deaths reported on the previous two days. The new report brings the province’s death toll to just four shy of 1,000, with 996 reported deaths, along with 9,612 cases of COVID-19 now considered resolved.

The province also reported a fifth death since last week in patients between the ages of 20 and 39, bringing the number of deaths in that group so far to seven.

Meanwhile, after the Province completed 11,554 tests which are more tests than the 10,852 on Monday, after a record 12,550 tests on Sunday. With testing being a key factor in combatting the virus, the province is aiming to be testing 16,000 people a day by May 6.

Hospitals have also reported 194 staff cases of COVID-19 as well as 27 deaths. There now have been 57 outbreaks in Ontario hospitals, which is up 2 from yesterday.

In terms of true stats from today’s numbers, which are from April 28 as of 4:00 pm, Unfortunately, number of hospitalized patients in Ontario due to the virus continues to rise as 20 more people were admitted yesterday bringing the total up to 977. Meanwhile the number of patients in ICU has dropped again for the third straight day from 245 to 239 yesterday to 235. Today, there are also 186 patients currently on ventilators, which has dropped again slightly for the second straight day. Also of note, 2,193 of the total 15,728 cases are healthcare workers.

Dr. de Villa said today that “We are currently facing many challenging circumstances. At times like this, I think it is important to always remember that even when things feel overwhelming, there is always hope. We see this hope reflected in many ways including the creative leadership demonstrated by some key organizations in our city.”

Canada has reported 1,348 cases today bringing the total to 50,373 cases of COVID-19 including 138 (11 fewer than yesterday) more deaths bringing the Canada’s death toll up to 2,904 deaths. With 1,682, Quebec has sustained the most COVID-19 related deaths in Canada. Ontario has now had 996 coronavirus-related deaths and British Columbia has now reached 105 deaths due to COVID-19. Quebec by far also has the most cases of COVID-19 with more than 25,000 and is now at 25,757 while Ontario is second highest at 15,728. The two provinces account for more than 50% of Canada’s COVID-19 case count. Alberta is now at 4,850 cases while BC saw a bit of a jump with 55 more cases increasing their number to 2,053 reported cases of COVID-19. Saskatchewan now has 366 reported cases while the rest of the Canadian provinces have well below 300.

Worldwide today, the numbers overall continue to decline. There are 3,179,494 cases of COVID-19, which is up 69,295 from yesterday as reported by the Johns Hopkins University. Of those cases there are have been 9,365 more deaths, which is a bit higher than yesterday’s number, bringing the worldwide numbers up to 226,173 total deaths due to the novel coronavirus.

In terms of deaths, the numbers all appear to be increasing slower since Saturday. The United States reported 3,352 Tuesday and now stands at 58,916 coronavirus-related deaths. New York City alone has reported 18,076 deaths but they seem to have be continuing to slow the spread now. Italy has had 27,682 deaths and they are also slowing, followed by the United Kingdowm which has leapfrogged ahead of Spain and France now with 26,097 deaths. Spain is next with 24,275 followed closely by France with 24,087 deaths due to COVID-19.