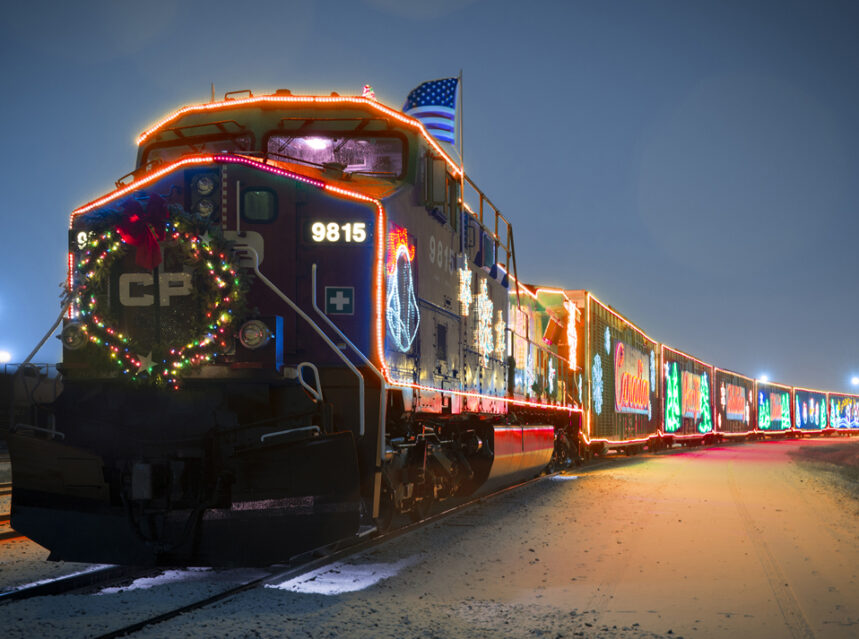 Rolling down the tracks once again, the CP Holiday train will once again arrive in the Toronto area with a stop in front of the CP Lambton Yard office at 750 Runnymede Road on November 28, 2019. With its magical, brightly decorated rail cars, the train will slowly pull in to a full stop and the stage doors will then be lowered – much to the delight of the young and young at heart. A brief presentation will first take place with local food bank officials and other guests. It is all for free – but they are asking people to bring food or a monetary donation for the local food banks, whose representatives will be there to collect the donations.

Right after, the fun begins! The crowd will be entertained with a mix of traditional and modern holiday-themed songs performed by Scott Helman, Madeline Merlo and Acadian folk-music group Vishtèn. The whole event lasts about 30-45 minutes so make sure you get there on time.

This year’s Holiday Train is expected to first arrive at the the Lambton Yard THURSDAY NOVEMBER 28TH at 8:15PM, with the show between 8:30 PM – 9:00 PM. It will then move on to the VAUGHAN at the N.W. corner of the CP crossing at Nashville Rd, near the old grain elevator around 10:00 AM on FRIDAY NOVEMBER 11TH with the shows between 10:15 AM – 10:45 AM. At each stop, once the band plays its farewell song, the stage door closes and the train heads off across Canada.

Before arriving in Toronto the CP Holiday Train makes scheduled stops on the 28th in the following Ontario towns: Belleville, Trenton, Brighton, Bowmanville, and Oshawa.

Meanwhile, also on Thursday November 28, 2019 the U.S. Holiday Train will make stops at Milton Glen Eden Ski & Snowboard Centre, West Parking Lot – 5234 Kelso Road from 4:45 to 5:50 pm and in Hamilton at the South side of Gage Park from 7:45 pm – 8:40 pm, with both stops featuring performances from Alan Doyle and the Beautiful Band.

“The CP Holiday Train is a program that our 13,000-strong CP family has immense pride in bringing to communities every year. Access to nutritious food is a basic necessity, and food bank usage is on the rise across North America. The program is our way to help in the fight against hunger by growing awareness of this issue and providing a fun and engaging way for the public to show their support,” states Keith Creel, CP’s President and Chief Executive Officer.

The program has raised over $15.8 million and collected more than 4.5 million pounds of food since first began 20 years ago.

with notes from Bonnie Wurst