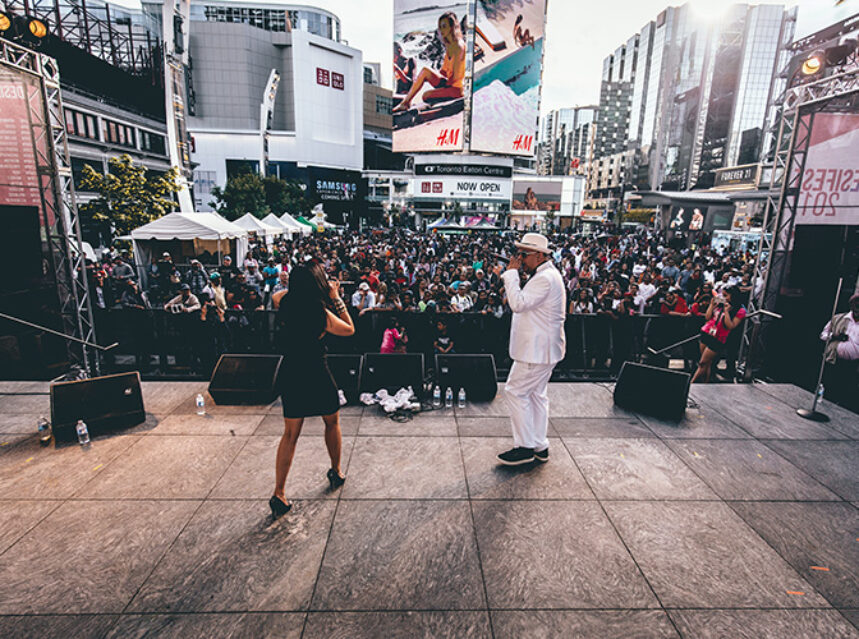 desiFEST Toronto – Another Montreal artist has made a name for themselves on international level. Bharat Kapoor—known on stage as Mr. Bolly—recently performed to a 25,000-person crowd at desiFEST Toronto. Mr. Bolly is an energetic urban artist with rap, R&B, and pop hits, and a self-proclaimed perfectionist when it comes to performing.

Mr. Bolly credits his creative parents for his lifelong interest in music. “They would invite friends over to sing and play drums,” he said. “I was influenced by their creativeness. My dad was a chef, and my mom was creative with clothing and design.”

His own musical journey began at age 15 while having fun with friends. Bouncing words and rhymes around the room, his friends encouraged him to pursue the arts more seriously. Kapoor was amazed by how classic language arts—like poetry—could translate into rap.

Kapoor enrolled at Concordia University for arts. “I wanted to learn more about writing poetry and English literature, and public speaking,” he said. “These things would help me improve as an artist.” He took acting classes as well to learn performance skills.

After Concordia, Kapoor took time off to travel and “find himself.” His journey led him to open mic nights and music gigs around the world. Eventually, he followed the arts home. “The more I looked out into the world, the more life brought me back to Montreal.”

Through his studies, travels, and career, Kapoor has learned that life doesn’t always lead where you expect it to go. When he returned to Montreal, he partnered with Sorin Pavelesco to open BTB Music. Kapoor put his own musical pursuit aside for the production company. “I lent my talent out to others that were further ahead than me,” he said. Kapoor was frustrated with his own career, so he turned to writing songs for other artists instead.

While running BTB Music, people became curious of his own talents that had been set aside. “The person behind the scenes moved to the front,” Kapoor said. Now, Mr. Bolly is working on a handful of exciting projects including a music video and album to be released later this year.

His recent success is the result of years of hard work, and fulfilling his dream of performing at desiFEST in Toronto. Mr. Bolly’s song ‘Victory’ is an anthem that pays homage to this journey.

desiFEST is an international program for South Asian artists. While many artists are from Canada, international artists are booked as well. Mr. Bolly hoped to perform at desiFEST for years, but the organizers told him that he wasn’t ready yet. This year, desiFEST contacted him and gave him a 7pm time slot. “My road to desiFEST was very emotional because I wanted to do it many years ago, but I never had the chance to do it,” he said. “I got busy with my own projects, but they were keeping an eye on me.”

Mr. Bolly spent weeks preparing with his collaborators, Chhaya Dewan and Stephen Voyce, who performed at desiFEST with him. Their chemistry shines when they take the stage. “They loved our performance,” Kapoor said. It was described as soulful and positive, with lots of energy.

Although Mr. Bolly loves to sing, he loves to perform even more. “It’s exhilarating,” he said. “It makes me feel like a child. It’s like heaven and earth is crashing. My insides are upside down. I have butterflies. It’s the experience of a lifetime.”

Performing for a crowd the size of desiFEST is a rush on another level. “The adrenaline takes over. It’s life changing. I never want it to end,” he said. “After we got off the stage [at desiFEST] we told each other we want to do this every day.” He thanks the organizer, Sats B, for the opportunity. “Toronto gave us a lot of love.”

Mr. Bolly finds his inspiration from Hollywood and Bollywood film. “My attire and my character is very Bollywood,” he said. He doesn’t look like a typical hip-hop or rap artist. He cites Charlie Chaplin and Raj Kapoor as specific influences.

When writing his songs, Mr. Bolly draws inspiration from his own life. His hit ‘Victory’ was created in this way. He took control of his own life to find success. The anthem accurately represents his own victory. It’s a lesson many people need to learn. “Anything is possible,” he said. “I worked hard at it every day.”

To listen to Mr. Bolly text ‘bolly’ to 555888. Or watch him live on July 5th at Metro Berri at L’Escalier and St. Catherine East from 9pm onwards.