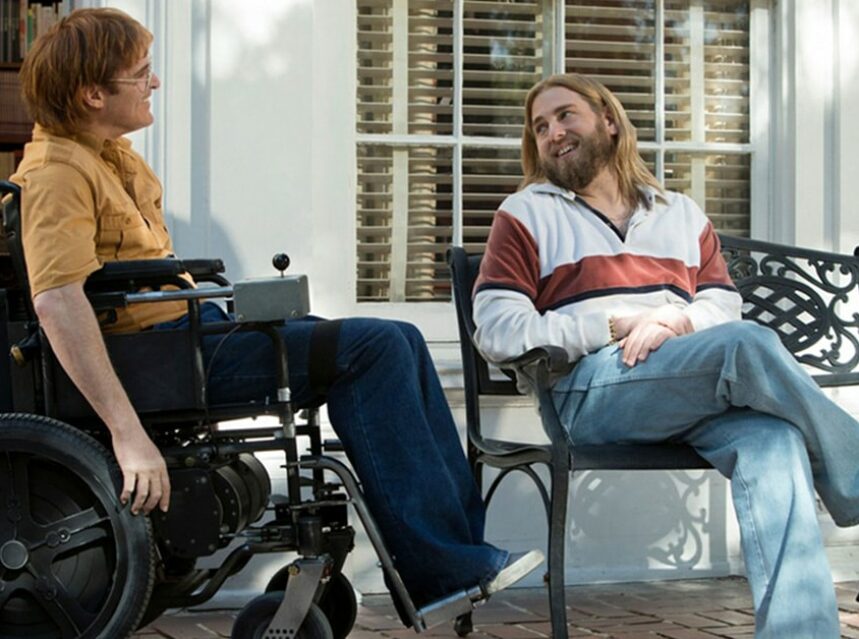 Don’t Worry He Won’t Get Far on Foot – This movie is based on the real story of cartoonist John Callahan who died in 2010, although with the expected artistic licence to treat some of the events. The celebrated director Gus Van Sant approaches the subject keeping a delicate balance between some of the most comedic aspects of the story, the dramatic ones –certainly the circumstances that led to, and the accident itself that resulted in Callahan (Joaquin Phoenix) ending up a quadriplegic, and the romance. Indeed the latter, involving Callahan’s relation with the beautiful Swede Annu (Rooney Mara), is the least developed, perhaps because of some apprehension on the part of Van Sant, to indulge in a Hollywood-style treatment of the topic.

In any case, the result is a film of solid dramatic construction in which the different emotional elements affecting Callahan: his solitude, his search for his biological mother, and his existential predicament, provide the spectator with a sympathetic view of the character’s life despite his self-destructive drinking addiction.

One can also see the transformation of Callahan, from his care-free attitude that leads him to engage in compulsive drinking with his friend Dexter (Jack Black) with whom he would have the accident that would change his life, to his pursuit of drawing, his attempt at rehabilitation both physical and mental when he joins Alcoholic Anonyms, and of course to the relation with Annu. Callahan’s joining AA would also bring him to meet another important character who would be instrumental in his transformation: Donnie (Jonah Hill) who in turn would carry with him another personal drama.

“Don’t Worry He Won’t Get Far on Foot” is a movie that deals with a subject that can be disturbing: the man who suffers a terrible accident that changes his life, but at the same time, it is a film that presents a story in realistic but optimistic terms. I recommend it as a very humanistic approach to life under extreme circumstances. The subject of the movie may not be of interest to young audiences.