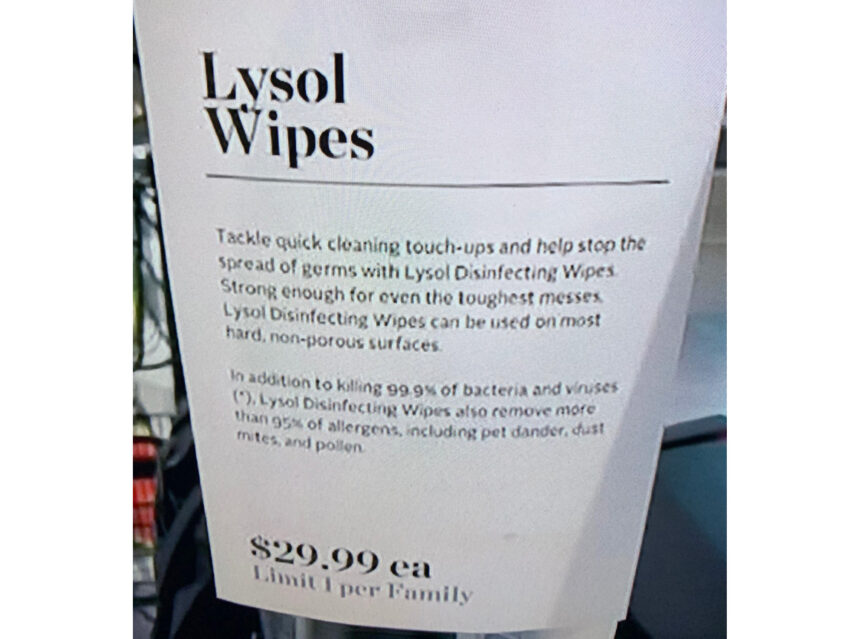 Pusateri’s Fine Foods at Avenue Road and Lawrence has been called out for raising prices on some food items during this pandemic. Customers began complaining on Twitter and images of Lysol wipes displayed with a price of $29.99 were posted on CP24 and on BlogTO’s Instagram account.

Meanwhile, a nearby box store is selling cases of six for the same price. Loblaws was selling a similar product for $3.44 each.

Ontario Premier Doug Ford issued a public response at a press conference to say, “When it comes to price gouging I have zero tolerance… I’m calling him out. Pusateri’s I hear they are selling hand-wipes for $30 a tin? That’s disgusting. I can’t even describe the words!”

“That hits a nerve when people are getting taken advantage of,” said Ford.

Pusateri’s president Frank Luchetta then posted a statement of apology, (no longer visible because they locked their twitter account afterwards) to say that it was a pricing mistake.

The statement says ” While no excuse, our stores are facing immense pressure on all levels of the operation. As a result of this mounting pressure, critical elements were overlooked including the incorrect pricing of this product. This was our mistake, our error, our oversight and we apologize to everyone impacted. We are promptly reviewing and adjusting any and all products that may have been improperly listed and every individual who purchased this product will be fully refunded by emailing info@pusateris.com.

Following the statement some customers reported that the price had still not been taken down.

Numerous people took to Twitter to express their outrage at the price gouging and applauded Ontario’s Premier for calling out Pusateri’s.

Premier Ford also said he would be bringing the issue of price gouging to cabinet to make it illegal. “We’re coming after you hard.” “They’re done, they’re gonna be gone,” said Ford.