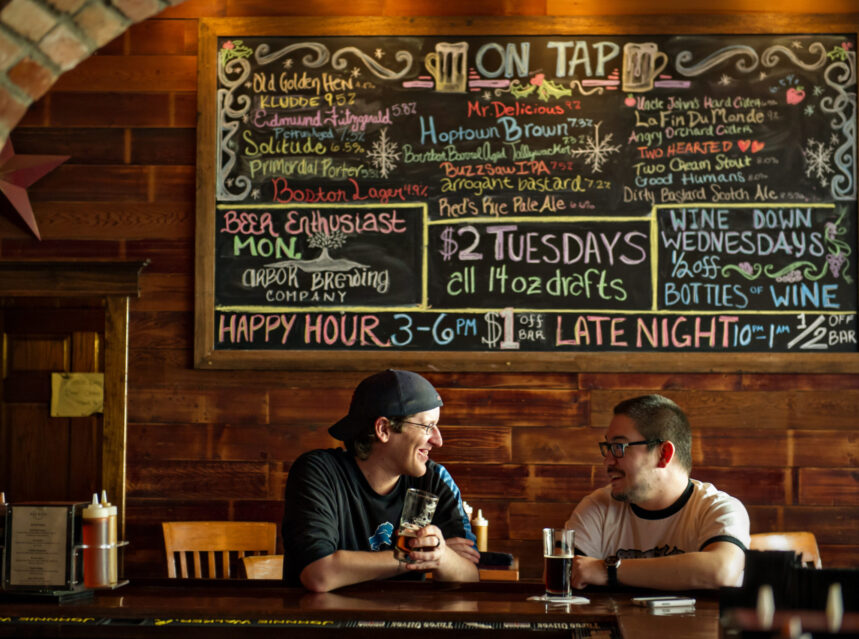 If you go in the spring, the cherry blossoms cast a dreamy pink hue against the blue sky. The region is known for its blossoming cherry industry, and a unique downtown store called Cherry Republic, which sells everything imaginable with a cherry theme.

Or if you travel to Ann Arbor during the summer you can explore the historic downtown or the area lakes.

Fall is football season with tailgate parties abound as fans head to “The Big House” (Michigan Stadium) to cheer on their Wolverines.

In winter, and especially during the holiday season, the town sparkles with decorations and people flock to the KinderFest Christmas Market.

Bob Seger was on to something when he sang “Down on Main Street.” Yes, he was singing about Main Street in Ann Arbor, his hometown. Downtown is filled with cool unique shops, incredible restaurants, art galleries, museums and intriguing cocktail lounges. Ann Arbor also has enough live entertainment venues to keep you going from day to night. Known as a “Big Ten” college town, there’s a hip, youthful vibe that is downright contagious. Plus, Ann Arbor offers some truly unique experiences, such as taking a flight in a vintage warplane at The Yankee War Museum.

Whether you are looking for a quick getaway for a girl’s or guy’s weekend or a couple’s retreat, you’ll find plenty to do “Down on Main Street” and throughout Ann Arbor.

The Yankee Air Museum houses a fine collection of vintage war planes on the very site which once was the Ford Motor Company’s Willow Run Bomber Plant where they built B-24 Liberators during World War II. Some 42,000 people produced a B-24 every 59 minutes. One of those workers was known as Rosie the Riveter who when the chips were down, famously said “We Can Do It!” –women at home can build war planes and help the war effort. Today, the legendary Rosie is often portrayed by Sarah Millser of Destination Ann Arbor.

Public rides on the vintage aircraft are available, a flight on a World War II C-47, 1945 transport plane called ‘Yankee Doodle Dandy’. Climb aboard this vintage aircraft and buckle into the cargo style bench seats for a bucket-list ride on a vintage airplane.

Tour “The Big House” a.k.a. University of Michigan Stadium

Built in 1927, The Big House is now the largest stadium in the U.S. with an official seating capacity of almost 110,000. Tour the stadium or book tickets early and see a game and enjoy some tailgating.

Arbor Brewing Company was established in 1995 by husband and wife team Matta and Rene Greff and the brewery offers delicious beer with extraordinary flavours in their gorgeous downtown restaurant and tasting room. My favourite was Strawberry Blond, followed by Buzz Saw IPA and The Sacred Cow.

Other Sights to See

Kelsey Museum of Archaeology houses a collection of over 1000,000 objects from the ancient cultures of Greece, Rome, Egypt and the Near East with permanent exhibits and rotating exhibits. University Museum of Art displays works from around the globe with more than 18,000 works of art in its permanent collection. Marvel at the ancient Japanese and Chinese ceramics and a highlight is the unique Tiffany architectural glass section.

Visit the office of President Gerald Ford where you can read personal letters including written by Maria Von Trapp. Many of Betty Ford’s gowns were on display, as well as jewellery and personal photos belonging to the President and the First Lady.

The Ark on Main Street is as famous as Ann Arbor itself. Established in 1965, The Ark is a nationally known acoustic and folk music venue featuring over 300 live performances a year. The 400 seats are usually filled early—so head over early to catch some of the best music going.

The Last Word has a fun Speakeasy vibe and the best Manhattan ever! Late night live music means the place is hopping! Try their Manhattan #1—fantastic!

Paul Saginaw and Art Weinzweig started Zingerman’s Deli in 1982. Today this multi-faceted business includes the original deli plus Zingerman’s Roadhouse, plus a bakery, candy factory, creamery, along with Miss Kim’s Korean Restaurant where you can enjoy sensational Korean food made by chef and managing partner Ji Hye Kim, who started out working at Zingerman’s Deli. It seems many of the notable chefs in Ann Arbor started their career at Zingerman’s before launching their own restaurants. For a girl’s or guy’s weekend, Zingerman’s Bakery offers baking and cooking classes.

Centrally located within walking distance to just about everywhere, this boutique style hotel has a chic and trendy college vibe that makes visitors immediately feel comfortable and at home lounging in the large lobby area, or gathered around the huge table enjoying cocktails. The rooms are also decorated in college motif with that Ralph Lauren classic look. www.graduateannarbor.com

Other travel articles by totimes.ca and mtltimes.ca

Nassau is perfect for a Fall getaway!

France – A night at Mont Saint-Michel