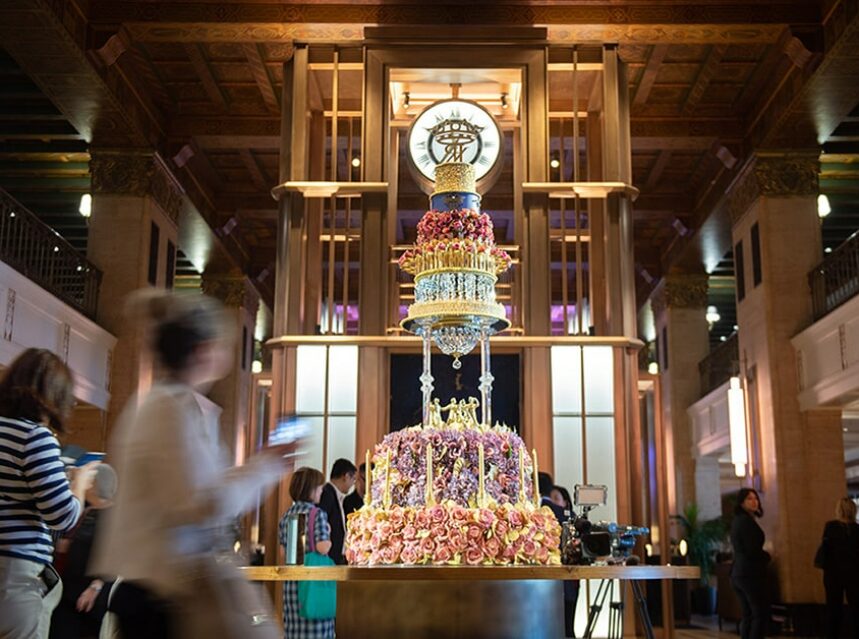 have treated with care, dedication and great respect,” said Paul Campbell, Royal York project lead at KingSett Capital, Fairmont Royal York ownership group. “This is much more than just a hotel – it represents much of the history and soul of our great city.”

After the ribbon cutting, the hotel officially unveiled its new lobby and lobby lounge, CLOCKWORK Champagne & Cocktails, as well as REIGN Bar. An additional restaurant and bakery are set to open in the coming days as part of the hotel’s complete signature dining experience, REIGN Restaurant + Bar + Bakery.

“A pivotal part of the Fairmont Royal York, CLOCKWORK will honour our legacy with a new statement timepiece,” said Edwin Frizzell, regional vice president and general manager, Fairmont Royal York. “Our ’90th Anniversary Clock’ is dedicated to the people of the city of Toronto, as well as the past, present and future colleagues of Fairmont Royal York who have, for 90 years, been the beating “heart” of our hotel..”

Since opening on June 11th, 1929, Fairmont Royal York has welcomed many heads of state and celebrities and has been host to many historical moments. To honour its past, the hotel commissioned author and historian Dr. Carolyn Harris to help create a self-guided history tour for guests to explore the hotel’s public spaces and learn more about its storied past. Looking ahead to the future, the hotel is sponsoring Toronto of the Future – a unique exhibition running from June 25th to July 1st that highlights the real estate and infrastructure projects expected to shape the landscape of the city.

To capture the hotel’s legacy and Golden Era roots, Frank Rea of Forget Me Not Flowers designed a stunning floral installation, The Celebration Cake, which will be on display in the hotel lobby for the month of June. In honour of 90 years, Fairmont Royal York also donated 90 room nights to Heritage Toronto, who will disperse them across the city for not-for-profits to raise funds to support their public heritage programming and the work of the over 100  community and volunteer organizations in Toronto.

“I am so thrilled to help celebrate Fairmont Royal York’s 90th birthday as they unveil their transformation,” said Mayor of Toronto John Tory. “The hotel is truly an icon here in the city of Toronto, and I am excited for it to continue welcoming guests from all over the world to the city for another 90 years.”

In addition to the lobby and dining spaces, the hotel also recently launched an entirely new Fairmont Gold offering — its luxury “hotel within a hotel” experience — and will soon reveal updates to its world-renowned meeting and event spaces as part of the property’s most extensive restoration project to date. The hotel will also soon reveal its new Legacy Suites, set to open later this summer.