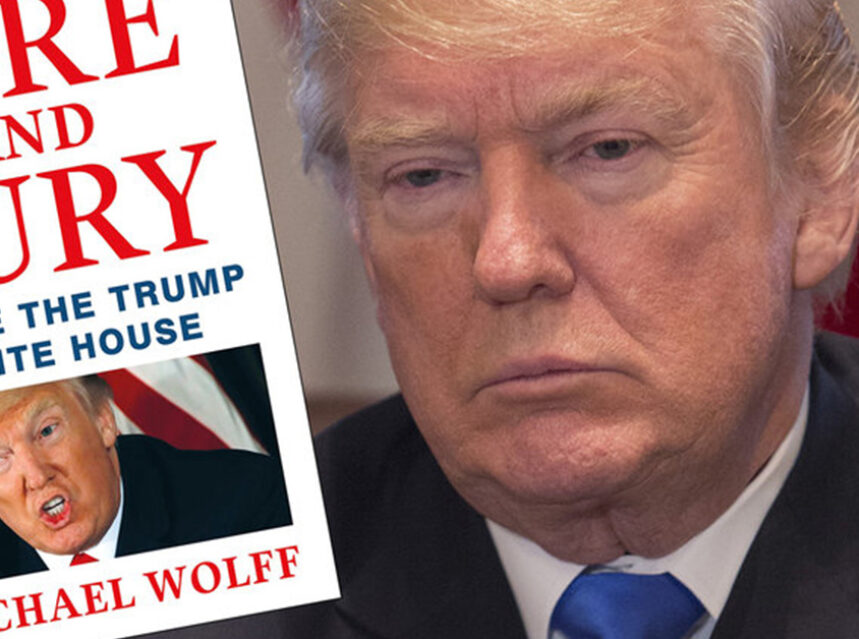 Fire and Fury by Michael Wolff – On the back of the dust jacket of Michael Wolff’s blockbuster bestseller Fire and Fury, there is a photo of President Donald Trump sitting at his desk in the Oval Office, while he is talking on the phone. During this phone conversation, Trump is surrounded by his close circle of advisors that were part of the Trump White House during this first crucial year of this controversial administration: Chief of Staff Reince Priebus, Vice President Mike Pence, Chief Strategist Steve Bannon, Press Secretary Sean Spicer, and National Security Advisor Michael Flynn.

Since the book was published last month, only two people in that Oval Office photo are still on the job: Trump and Pence. Either through resignation or firing, the other four former members of Trump’s White House staff are indicative of the volatile nature of what is going on within the halls of 1600 Pennsylvania Avenue these days, and the non-stop revolving door that is now an ubiquitous part of the Trump White House.

This is the unpredictable world of executive power that is prevalent through the narrative of Wolff’s book, which thanks to a lot of searing advance publicity, not only compelled the publisher to push up the publication date by four days, but immediately shot up to the #1 position on the New York Times bestseller list (and presently remains at that top spot).

After reading this scorcher of a behind-the-scenes account, one thing is clear to me: Fire and Fury may not exactly create the same powerful after effect to Donald Trump that Carl Bernstein and Bob Woodward’s one-two journalistic punch All the President’s Men and The Final Days had on Richard Nixon as a result of Watergate … but it comes pretty darn close!

And when you finish reading this book, one thing is frighteningly clear: this is a White House in a harrowing state of disarray – or to put it bluntly – a mess!

Wolff, an award-winning journalist for such publications as Vanity Fair, New York, USA Today and The Hollywood Reporter, somehow managed to get himself unlimited access to the West Wing (where he basically planted himself on a couch there and acted like a perennial fly on the wall), and conducted more than 200 interviews with a number of senior staffers and the president himself.

The end result of his indefatigable interviewing and research is a narrative that will have small “l” liberals and rabid anti-Trump people wringing their hands with delight.

First of all, the main reason for this state of disarray in the Trump White House is the result of a three-way power struggle between the following factions with the sole purpose of currying and winning the president’s undivided attention for their respective agendas: former chief strategist Steve Bannon, who wanted to get Trump’s ear (and pull the executive strings) so he can run the White House with his governing concept of “Trumpism-Bannonism”; Reince Priebus and Speaker of the House Paul Ryan, who wanted to reach out to Trump with a more traditional Washington-style legislative agenda; and the duo of daughter Ivanka and son-in-law Jared Kushner (aka “Jarvanka”), who firmly believed that the president would rather listen to the counsel of family members than someone outside the Trump lineage who possessed more government or political experience (which proved, unfortunately, to be the winning formula … case in point, they approved Trump’s appointment of Anthony Scaramucci – who is portrayed as a questionable businessman and a rank opportunist – to the position of White House Communications Director, and held that post until he was fired 11 days later).

…And look at the commander-in-chief they tried to win their approval from: a person who has a short attention span, who didn’t listen to his close circle of advisors (who in turn, didn’t ever have a clear definition of their roles in the White House to begin with), who rarely read his briefing books, had no patience for high level meetings and left them early, was always fishing for compliments that would boost his growing ego (one glaring example is when he hosted MSNBC morning show co-hosts Joe Scarborough and Mika Brzzezinski at the White House after his first week in office, and kept asking them “so how do you think the first week has gone?”), and spent his evenings in his bedroom watching TV, writing tweets and conducting a constant series of phone calls with friends in order to get more self-serving compliments.

And as Wolff plainly states in many of the vivid descriptions of Trump’s questionable character as president: “Trump was impetuous and yet did not like to make decisions, at least not ones that seemed to corner him into having to analyze a problem.”

I can readily understand that this book, the first to give a rather unflattering look at what is going on behind the scenes at the young Trump administration, will – and certainly has – gone through a whole lot of vetting regarding facts, factual errors and inconsistencies, insider denials and the character of Michael Wolff himself. But the narrative – which at times can be a little repetitive – has to be read carefully in order to savour and appreciate the task he set out to do, which was to give the public an unflinching portrait of the topsy-turvy world of the most accidental president in U.S. history.

And after the pre-publication controversies and blaring headlines, the string of books that are being released throughout this year dealing with the 2016 election and the Trump White House (including one by James Comey, the former FBI Director who was unceremoniously fired by Trump last year), the growing Russia probe, and the continuing examples of Trump’s unpredictability (which included labeling Democratic members of Congress as “treasonous”, because they did not applaud during his first State of the Union speech, and his demand to have a military parade staged based on what he saw during a Bastille Day parade last year during a state visit to Paris), people should realize the importance of Fire and Fury as being the first book to open their eyes to what really goes on in the Trump White House. Hopefully, they will come to these two conclusions as a result: this is not how a person should conduct themselves as President of the United States; and this is certainly not the way to govern a country that was built on democracy and freedom.