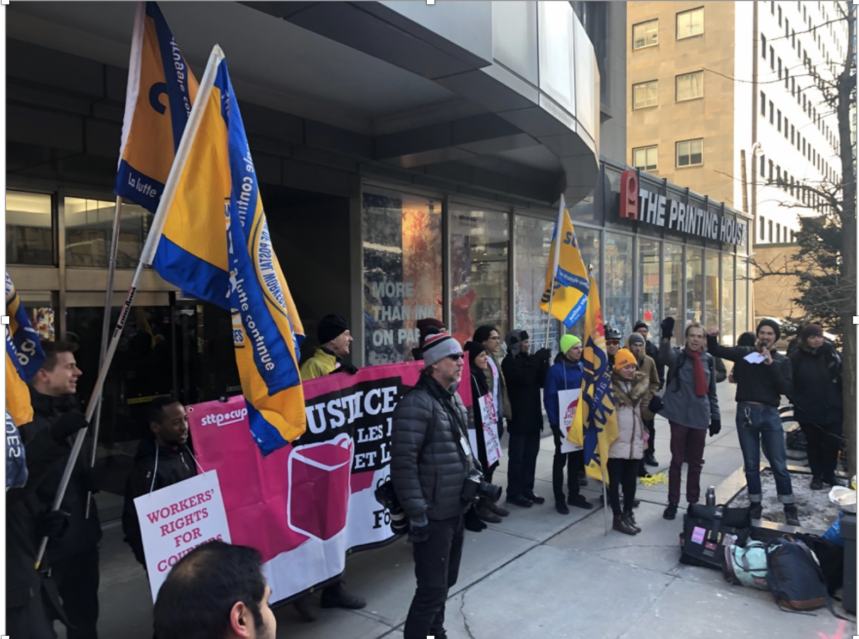 Final arguments determine the classification of Foodora couriers in Toronto

While supporters rallied outside, one of the final hearings for the unionization of Foodora Inc. couriers took place in front of the Ontario Labour Relations Board (OLRB) on Wednesday.

Couriers for Foodora alongside the Canadian Union of Postal Workers (CUPW) gathered to continue to put pressure on the company to classify workers as employees rather than independent contractors.

“Some people say that they are just gig workers from a gig economy, but no. They are workers, and workers deserve rights,” said 3rd National Vice-President of CUPW Jean-Philippe Grenier in his speech at the rally.

Rallies like this have been taking place since ‘The Justice for Foodora Couriers’ organization or “foodsters” as they call themselves held their first gathering back in May.

Ivan Ostos, a member of the organization, said the only way to ensure him and his colleagues are treated fairly, is to keep fighting for proper classification.

“We know that Foodora is our employer- we feel that every day. Without our brains and without our muscle, not a single wheel would turn for Foodora,” he said. “We want something as simple as safety and respect at our jobs, what’s wrong with that?”

As independent contractors, couriers are exempt from basic workers’ rights such as maternity leave, pension plans or health and safety protections.

This lack of reliability makes workers such as Jennifer Scott feel unsafe on the job.

“I experience a lot of harassment from customers, and Foodora fails to protect us in those situations. They misclassify us on purpose, so they don’t have to do anything in situations like this,” she said.

Scott’s story of mistreatment under the title of independent contractor is just one among many.

Chris Roberton is also a courier for the company and says that there are many things about the job that don’t seem right.

“Not only is the job dangerous, but it’s unfair. It doesn’t matter how much someone orders, I get paid the same amount but I’m carrying more on my back. And I have to get there quickly no matter the conditions.?” he said.

The vote to unionize was held back in August but the process was prolonged by an unfair labour practice complaint from CUPW stating Foodora was encouraging its couriers to vote ‘no’ for the unionization.

The results of the vote were sealed and will not be released until the hearings are over. Until then, Toronto’s foodsters are keeping the pressure on to unionize with the CUPW.

“This is just the beginning,” said Ivan Ostos. “We will not stop until all gig and precarious workers have the rights they deserve.”