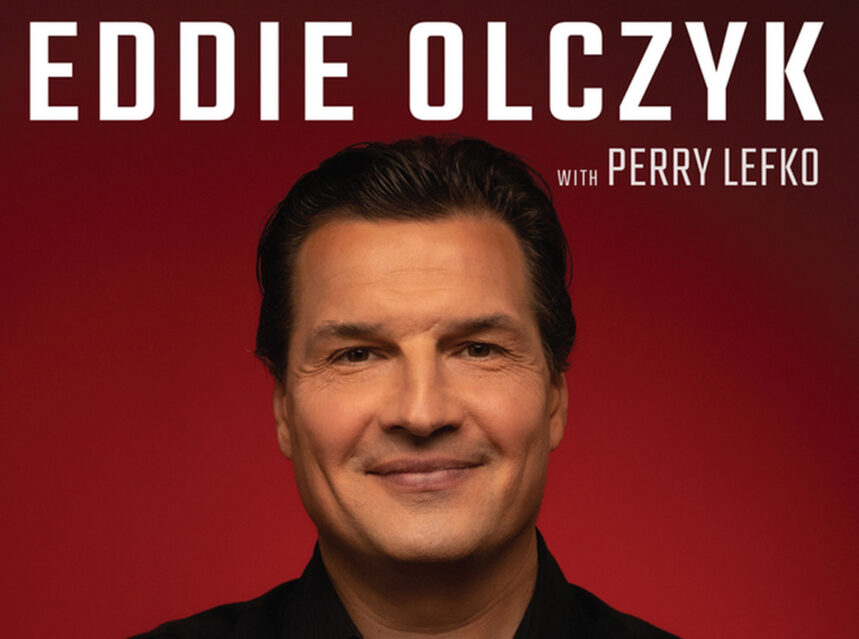 As a trailblazing American-born NHL star, and an Emmy award-winning NBC hockey, and horse racing commentator, Eddie Olczyk has some great stories to tell. But his eight-month-long battle with Stage 3 colon cancer in 2017 is the most poignant part of his new memoir, “Beating The Odds In Hockey and In Life,” on the Triumph imprint.

The suburban Chicago native has had many significant thrills over the years – like playing for the U.S. Olympic hockey team at the age of 17, being selected third overall in the 1984 NHL Draft by his hometown Black Hawks, winning the Stanley Cup with the New York Rangers in 1994, and once taking home $497,000 on a Pick Six bet at Hollywood Park. But he can take even more pride in surviving cancer surgery and 12 hellish rounds of chemotherapy, with the support of family and friends. Olczyk went public with his ordeal, and while now declared cancer-free he has stepped up as a proponent of colonoscopy screening.

“(Eddie’s) very honest, he’s very emotional, and he really wanted to tell his story, He wanted other people to know what he went through, and advocates — whether it’s a colonoscopy, or if you’re just not feeling well — to go get yourself checked out,” says the book’s co-author Perry Lefko, who goes back 30 years with Olczyk, to when he was covering horse racing for the Toronto Sun and the forward owned some thoroughbreds.

The 53-year-old father of four racked up 342 goals and 452 assists through the course of 1,031 NHL games (with six teams), before being inducted into the American Hockey Hall of Fame in 2013. While sharing humourous stories from the locker room, in “Beating The Odds” he also pulls no punches in addressing the pressures, and cut-throat nature of the business.

For Leafs fans, he has numerous anecdotes from the dysfunctional Harold Ballard era of ownership – highlighted by team management phoning to tell him he’d been traded to Winnipeg, while his wife Diana was in labour with their second child!

Upon retirement, “Edzo” became the colour commentator for the Penguins on FSN Pittsburgh, where play-by-play man Mike Lange said, “he nailed it immediately”. Olczyk subsequently moved behind the Penguins’ bench in 2003 to coach stars like Sidney Crosby, and Mario Lemieux, before being fired in December of 2005.

The following season he became the long-time game analyst for the Chicago Black Hawks; and he also soon began providing colour for NHL on NBC. Eddie O received broad, goofy notoriety while covering the 2010 Vancouver Winter Olympics, when he proclaimed Team USA’s 5-3 victory over Canada to be, “tremendously tremendous” (an expression he’d picked up from one of his friends).

Meanwhile, his prowess as a horse racing handicapper soon found him doing colour, as part of NBC’s Triple Crown team. In the midst of his chemotherapy in 2017, Olczyk continued his work as an analyst as best he could – even winning one major handicapping challenge.

“He’s the best handicapper I’ve ever seen,” Lefko adds.“When it comes to the Kentucky Derby, and the major races he’s had some (good success). His credibility is there.”

He notes that since the book’s November release, Olczyk has been doing, “a ton of media – print, radio, and TV – and it’s, “doing really well”.

3 ‘Must-Have’ coffee-table books for the Holidays