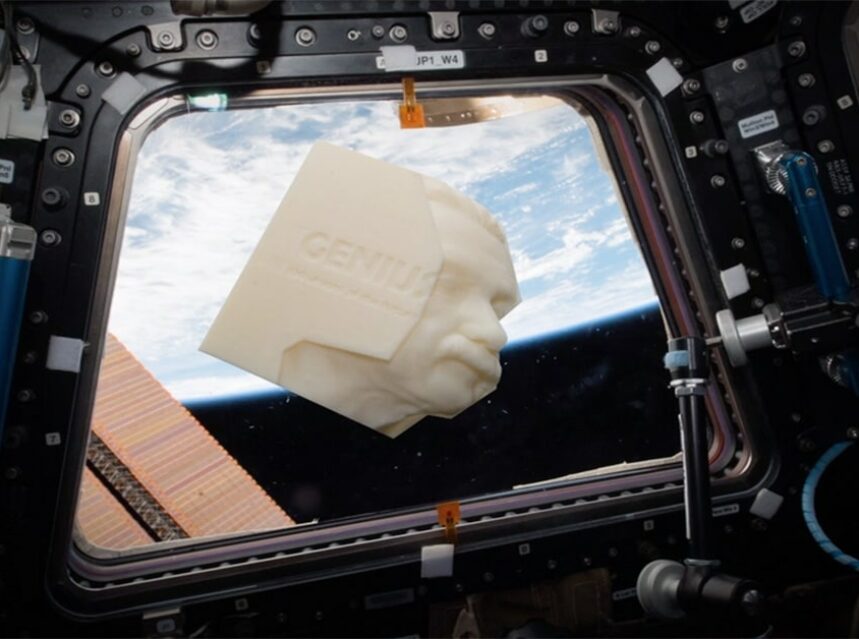 Genius 100, an initiative of the Canadian Friends of Hebrew University (CFHU), that gathers a community of pioneering humanitarians and changemakers in such fields as the arts, sciences, leadership, technology and more, in order to help bring new and meaningful innovations to the worldwide community at large, wanted to commemorate the 100th anniversary of the publication of Albert Einstein’s landmark General Theory of Relativity in a very special way.

“Originally, the idea was to create a bust of Einstein, and have 100 select individuals who have had an impact on humanity sign the bust. However, industrial designer Ron Arad wanted to take things in another direction. He felt a bust was not the best way to commemorate Einstein’s impact on the world. Instead, he suggested that a 3D printed book be created, in which these 100 individuals would offer their vision of the future, so that it would inspire many generations to come,” said Helen Hatzis, the Chief Community and Development Officer for Genius 100 in a recent phone interview.

The end result would be “Genius: 100 Visions of the Future”, the first book of its kind to be printed as a 3D book. According to Ms. Hatzis, a committee of about 30 people had the difficult task of selecting whom those 100 individuals would be to offer their respective visions of the future. One of the selection criteria is that they had to fall into one of the 10 following categories of achievement: arts, education, entrepreneurship, environment, innovation, leadership, philanthropy, humanity, science and technology. “We had to seriously look at the impact these 100 people made and how the world viewed them,” she added.

And after such an arduous process, an impressive list of personalities were chosen to offer their unique visions of the future for the project, including Barbra Streisand, filmmaker Ridley Scott, Nobel Peace Prize recipient Nadia Murad, Shimon Peres, Deepak Chopra, Justice Ruth Bader Ginsburg, and symphony conductor Zubin Mehta.

After the project was officially launched at a ceremony that took place in Montreal in September of 2017, the work on the production of the book immediately began. First of all, a prototype of the Genius 100 book was printed in a rather unusual printing plant … the International Space Station. Once the prototype was successfully completed, production on the actual book began.

The 3D book was designed to have the likeness of Albert Einstein emerge from the pages opposite the spine, and used the laser printing process to print and bind the books layer by layer, with each page featuring each vision of the future by their respective contributor, which ranged from one sentence to a maximum of 250 words.

“This is quite a substantial book. It weighs about five pounds and each copy takes about five days to get printed through the 3D process. But this is a publishing milestone, and Einstein deserves such an honour for what he has done for science and humanity throughout his live,” said Ms. Hatzis.

Only 300 copies of the landmark 3D version of “Genius: 100 Visions of the Future” are going to be printed, with copies being distributed to the 100 chosen visionary contributors, with the remaining copies given to the leaders, entrepreneurs and innovators who are the founders of the Genius 100 organization. The first copy of the book that was printed is going to be autographed by the 100 visionaries at different signing ceremonies around the world, and will be auctioned by Christies in 2020, with the proceeds from the auction going towards funding many of the global projects that are being initiated by the Genius 100 organization. Ms. Hatzis also noted that a 2D version of the book will be printed in the near future that will be for sale to the general public.

For more information about the “Genius: 100 Visions of the Future” book, or the Genius 100 organization in general, go to www.genius100visions.com.