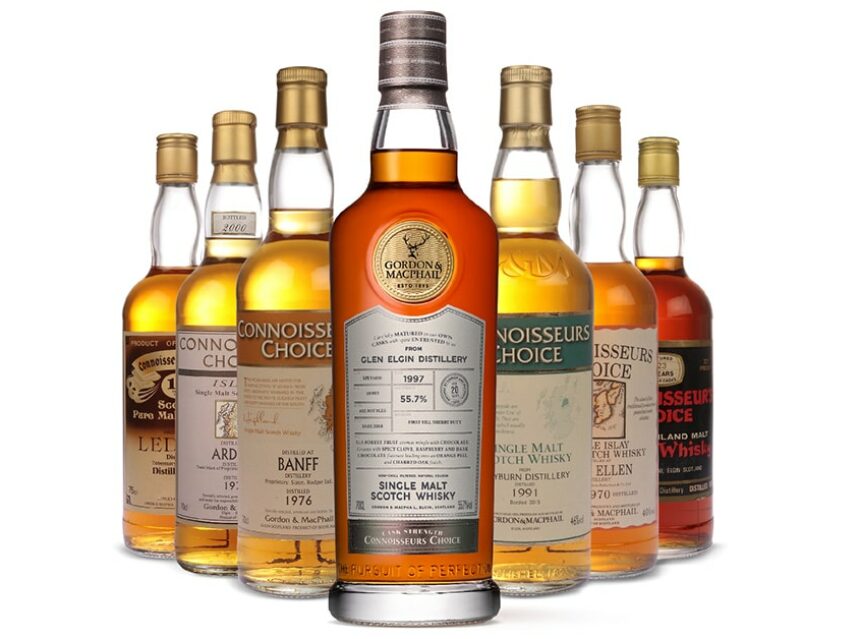 Gordon & MacPhail – To celebrate the 50th Anniversary of its ‘Connoisseurs Choice’ range, family-owned whisky creator Gordon & MacPhail is enhancing the range with a series of single malts aged 30 years and above.

George Urquhart, second-generation member of the Urquhart family that owns Gordon & MacPhail, first pioneered the ‘Connoisseurs Choice’ range in 1968 at a time when very few whiskies were bottled as single malts.  Presenting these new releases as a range effectively invented a category in a market which, up to then, had been dominated by blends. In the late 1960s the ‘Connoisseurs Choice’ range provided a platform for many of Scotland’s single malt distilleries, some of which had never before been released as single malts.

Over the past five decades, almost 100 of Scotland’s distilleries have been represented across more than 2,000 separate bottlings under the ‘Connoisseurs Choice’ banner, encompassing the entire spectrum of single malt flavours and profiles and featuring spirit from many distilleries that have been closed for decades.

The new series of ‘Connoisseurs Choice’ releases is aged to a minimum of 30 years and features single malts from distilleries such as Mortlach, Caol Ila and Linkwood, among others. Available in decanter-style bottles inside engraved wooden presentation boxes, each whisky has been selected for bottling by Associate Director of Whisky Supply, and grandson of George, Stuart Urquhart at its peak, a skill handed down through four family generations.

The premium expressions are complemented by 30 further ‘Connoisseurs Choice’ single malts. Matured in Gordon & MacPhail casks in small batches, all are non-chill filtered and bottled at natural colour.

Stephen Rankin, Director of Prestige and a fourth-generation member of the Urquhart family, owners of Gordon & MacPhail said: “We’re proud to be the curators of Scotland’s liquid library – the world’s most diverse stock of single malt whiskies. When my grandfather first launched ‘Connoisseurs Choice’ in the 1960s he was considered eccentric for taking such an approach. Today, he is heralded as one of the industry’s pioneers having provided whisky lovers with the opportunity to explore many whiskies never readily available as single malts. Our new releases celebrate this proud heritage, presenting unique expressions from revered distilleries that will appeal to a wide range of tastes around the world.”

Gordon & MacPhail is also releasing three new expressions in its new ‘Discovery’ range, designed as an ideal starting point for whisky drinkers to explore the wide diversity of flavours that exist within single malt Scotch. Under the ‘Discovery’ banner, Gordon & MacPhail groups new expressions in three distinct colour-coded profiles; ‘Smoky’, ‘Sherry’ and ‘Bourbon’. The latest releases are from the Ledaig, Bunnahabhain and Tomatin distilleries.

Prices for the new ‘Connoisseurs Choice’ releases start at approximately £75 RSP, rising to around £500 for the premium expressions, dependent on taxes and import duties. Whiskies in the ‘Discovery’ range retail at £50.

Earlier this year, the 123-year-old, family-owned company streamlined their existing portfolio into five new ranges, with ‘Connoisseurs Choice’ the first to be relaunched in April 2018, specifically coinciding with the 50th Anniversary. The second range to be launched was ‘Discovery’ in May, with ‘Distillery Labels’ following in July. ‘Private Collection’ will be revealed to consumers later in the year. The launch of the next ‘Generations’ release is yet to be revealed.