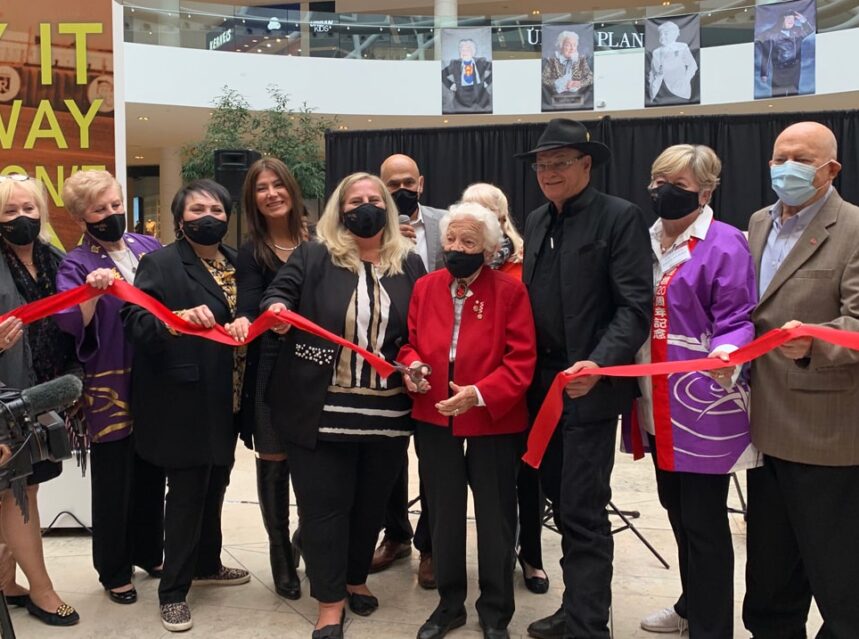 The launch of Hazel: 100 Years of Memories, described by the AGM as a labour of love, drew a large crowd as leaders from across the province, within the community, family, friends, and other GTA dignitaries, all gathered for the media launch of the pop-up exhibition.

For anyone who has grown up in Mississauga or is new to the city, Hazel: 100 Years of Memories is an opportunity to remember, learn, participate and celebrate by taking in everything Hazel.

That’s right, while at the Erin Mills Town Centre finding those perfect gifts, you can also experience Hazel’s life stories told through colourful art, video and displays that are also an educational experience for the younger generation. The exhibition portrays a centenary journey of a remarkable woman who has broken barriers for most of her life, as a daughter, wife, mother, athlete, businesswoman, humanitarian, politician, and mentor.

A true force to be reckoned with, Hazel McCallion, originally from Gaspé, Quebec has given so much to the city of Mississauga, serving as mayor for 12 consecutive terms from 1978 to 2014, and continues to consult with renowned leaders who seek her counsel.

At the exhibition, take a stroll down Hazel’s memory lane, from working at her father’s fish market in Gaspé, to her storied pro hockey career in Montreal, to early days as mayor of Streetsville and then Mississauga, and of course guiding Mississauga through the world’s largest peacetime evacuation due to the great train derailment of ’79, and carrying the Olympic torch. Be sure to check out the colourful cityscape and hard-hat development display, along with all her ornate gifts and dresses from visits with dignitaries in Kariya, Japan, Mississauga’s sister city.

Community groups and businesses worked together to create these one-of-a-kind stories, sharing Hazel’s work and love in an inclusive diverse way through art and exhibit.

The AGM’s Hazel: 100 Years of Memories exhibit will continue at Erin Mills Town Centre from now until February 28, 2022.

story and photos by Terry Lankstead