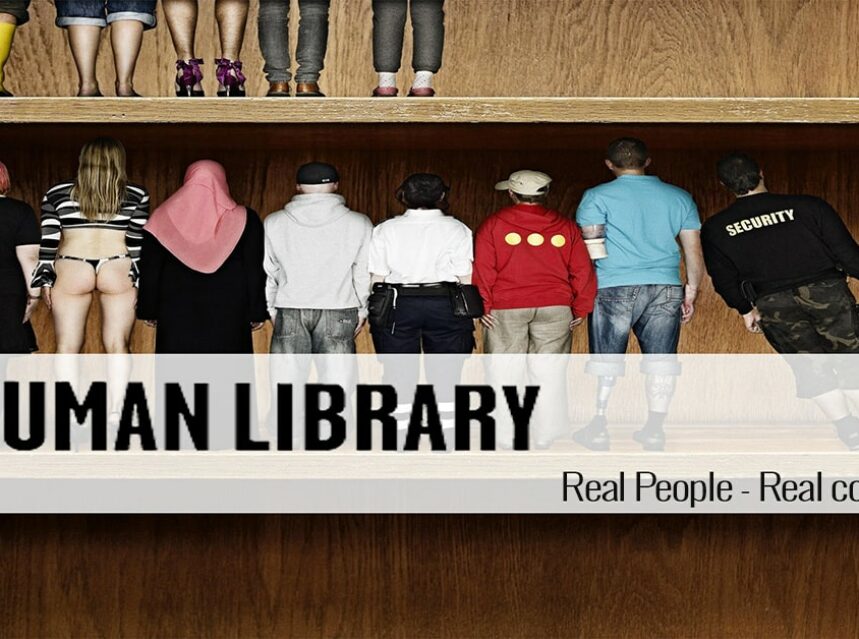 Human Library – It is not simply a library. The Human Library is a global movement, where people called ‘books’ are checked out to ‘readers’. The topics and stories shared are intended to stimulate conversations and help others get past stereotypical preconceptions on many issues and subject matters. It is like picking up a book and sitting down to read someone’s story, but in a way you might not have ever considered before; in real time and with a live person telling it to you. It’s an amazing initiative and growing in communities on a global scale.

The experience is more of a conversation than a formal talk or speech and lasts about 15 to 20 minutes, taking place as a special event in a library or other conducive venues. Readers choose from a board to see which books and titles are available and decide which ‘story’ they want to check out. They are then introduced to the human ‘book’, a person who shares their experience and knowledge with them, while sitting down together in a quiet area of the venue.

It’s a movement that started in 2000 at the Roskilde Festival in Denmark and quickly spread, with events now happening all over the world. One event that took place in 2016 at Fairfield University in Connecticut ran for four straight days and featured over fifty different titles – with more than a thousand readers taking advantage of the opportunity of checking out a ‘book’ from the Human Library selection. It was so successful they held another event in 2017.

As they state on their website, ‘the concept works… it helps build understanding for diversity by providing a framework for real conversations about important issues’.

The points they make explain why it works:

• Open and honest conversations that can lead to greater acceptance, tolerance and social cohesion in the community.

• Real people in real conversations within a framework setup to help facilitate and accommodate the process.

• Because this is an innovative approach to challenging stigma, stereotypes and prejudices through a non-confrontational and friendly conversation.

• To give a voice to groups in the community that are stigmatized and to help bring about platforms that support a greater understanding of diversity and social cohesion.

Human ‘books’ share their stories from personal experience, including just about everything from:

Held mostly in schools, libraries and at fairs, makes it more accessible to organize an event – no matter what your budget is. What you need is ‘time and idle hands to do the tasks’. It’s why it has been possible for so many to organize their own events with very little funding.

At last estimates, the Human Library has been presented in more than 70 countries around the world from Romania, Iceland, Finland, Norway, Italy, Holland to Slovenia, Belgium, Portugal and Australia – to mention a few.

If you would like to find out more about the Human Library, how you can organize an event, become a Reader or a Book go to: http://humanlibrary.org/