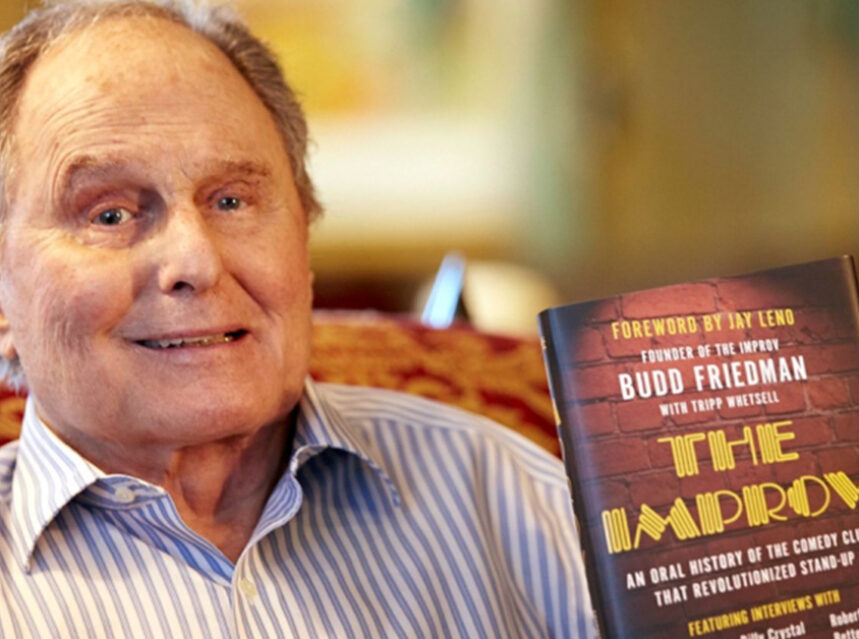 The Improv by Budd Friedman – Exactly 55 years ago, Budd Friedman, a former advertising executive and aspiring Broadway producer, returned to his native New York City to open up a night club on West 44th Street in the city’s Hell’s Kitchen district (but not far from the theatre district).

It was called the “Improvisation”, and his original intention was to run a night spot for singers, musicians and especially the casts of the hit Broadway musicals of that period, to drop by after an evening’s performance to relax, unwind, enjoy reasonably-priced food, and maybe go on the club’s stage to perform an impromptu, or improvised, set to entertain the audience in attendance.

The Improvisation quickly became a success, attracting everyone from the cast of the hit Broadway musical “How To Succeed in Business Without Really Trying”, to Judy Garland, Liza Minnelli and up and comers like Better Midler, to enjoy the club’s relaxed atmosphere and maybe perform a number or two without the everyday pressures of putting on a good show. As the 60s progressed, the club began to attract another breed of performer, as established and neophyte comedians like Rodney Dangerfield and Richard Pryor began to perform at the club on a regular basis to try out their latest comic material.

By the 70s, the club shortened its name to “The Improv”, and it quickly became THE place in New York for stand-up comedians of all stripes to hang out with their comedic peers and try out and develop their material and comic personas in front of a live audience. By the time it opened up its Los Angeles club on Melrose in 1975, the Improv and its founder Budd Friedman not only was known for being the model of the comedy club that we know today, but it also became synonymous with being a training ground and star maker for some of the greatest names in stand-up comedy over the past 50 years, such as Robert Klein, Jerry Seinfeld, Billy Crystal, Larry David, Andy Kaufman, Drew Carey, Jay Leno and Jimmy Fallon.

“Without question, Budd is the father of modern-day stand-up. He made it possible for people to feel good about themselves with a real comedy audience,” said comedian Richard Lewis, who also got his beginnings at the Improv. “Budd Friedman was the first to give praise and recognition to great comedy and great comedians. He was the first guy to give real prestige to comedy. Budd turned us into stars.”

Gathering 55 years of memories, successes, setbacks and discoveries in the stand-up comedy world, Friedman has put together a memoir/oral history that is just as entertaining as the comedians who performed in front of the brick wall of its New York and Los Angeles locations, which is called, plainly enough, The Improv.

Friedman tells his story about the ups and downs of running such a legendary comedy club. But what gives this book so much balance and credence is that he allows the people who worked behind the scenes and the comedians who performed onstage the opportunity to tell their side of the story of the Improv. And what an impressive array of people who were interviewed for the book; besides the aforementioned people above, we get to hear from Judd Apatow, Bill Maher, Bob Saget, Chris Albrecht (who helped Friedman run the New York club and later became the head of HBO), Jimmie Walker, Paul Provenza, Danny Aiello (who started out as a bouncer at the Improv), David Steinberg and Jerry Stiller, amongst many others.

And what stories that are told: Rodney Dangerfield as an Improv fixture during the 60s (even after he opened his own comedy club in 1969); Friedman allowing a young Jay Leno to be regular after he found out that he commuted from Boston to New York three times in a row (his day job was to deliver cars for a Boston luxury car dealership) so that he can perform at the club; Friedman’s early recognition of the unorthodox comic genius of the late Andy Kaufman and Robin Williams; the tragic comic legacy of Freddie Prinze; Larry David’s rather erratic comic persona (in which one time he went onstage, surveyed that night’s audience, said “Nah,nah,nah, this isn’t going to work for me” and promptly left the stage); Bruce Smirnoff’s bizarre episode of driving a very inebriated, philandering Johnny Carson home from the Hollywood club in his Mercedes; and Friedman’s intense rivalry with dictatorial Comedy Store owner Mitzi Shore.

Although he sold the Hollywood Improv club several years ago (the original New York club closed its doors back in 1992), and Friedman is basically retired from the highly pressurized world of running a pioneering comedy club, he has given comedy fans a terrific record of his contribution to the world of modern stand-up comedy with his book The Improv. It’s a highly enjoyable look at a man who wanted to be a big time Broadway impresario, but ended up being present at the creation of the stand-up comedy revolution and through the Improv, was a witness and driving force to the evolution of this entertainment genre, and the places we go to in order to appreciate it.