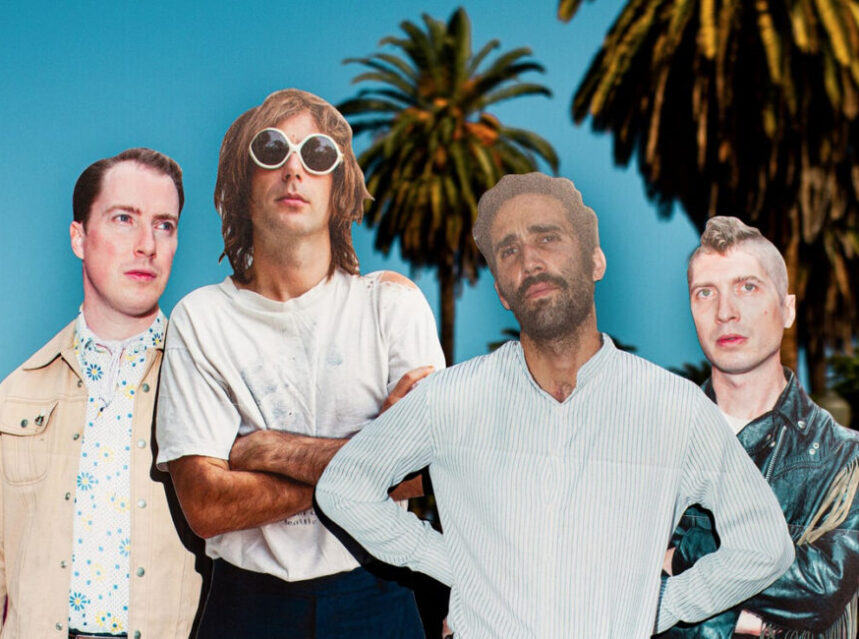 Five years after the last Islands album and 15 years on from the underground classic debut Return to the Sea, the beloved project of prolific Montreal indie rocker Nick Thorburn has re-emerged with the announcement of their 8th full length, Islomania.

The album will be their first on the Toronto label Royal Mountain Records, who will release Islomania worldwide on June 11th. To mark the announce Thorburn has spoken to Stereogum about his retirement from music, his return and his remarkable and multi-faceted artistic career. Islands have also shared the lead single with Toronto Times, the infectious “(We Like To) Do It With The Lights On“.

A hallmark of Thorburn’s output throughout his career has been his playful approach to his serious gift for pop songwriting, something that holds true on this latest single. Accompanied by a video from the award winning filmmaker Tim Nackashi, the track is a relentless earworm that was born, as Thorburn explains, from a brief turn as a songwriter-for-hire after he retired the band in 2016.

“After quitting Islands in 2016, I briefly considered doing writing for others,” says Thorburn. “I came up with the song title as a tossed-off joke. It seemed fitting with the kind of playful innuendo that seems to do well in the pop sphere. Once I started to flesh it out after booting up the band again, I realized it was mine, and for Islands only. I started it with the groove first, and built the melody off the top. This is like most of the songs on this record, which is new for me.”

At the end of 2016, after ten years and seven albums, Nick Thorburn quietly decided to put an end to Islands and retire from music. There was no announcement or farewell, only two shows at Webster Hall in New York and the Hollywood Forever Cemetery in Los Angeles to commemorate the tenth anniversary of the band’s widely adored debut album Return to the Sea.

“This seemed like a perfect time to put a cap on things and close out the circle,” Thorburn says. He switched focus, selling and producing a pilot television script, creating a graphic novel with preeminent comics publisher Fantagraphics, and scoring a few films and the occasional BBC radio show.

Thorburn’s years-long leave of absence resulted in a kind of rock and roll Rumspringa, with Nick unable to shake the bug for making records. After a sudden burst of creativity from a few weeks of working in his kitchen studio, Thorburn had written dozens and dozens of songs informed by everything from late-70s avant-disco to Thea Lim’s time-travel novel An Ocean of Minutes, and would write dozens more over the next year and a half, almost all with a clear focus on rhythm and groove.

Thorburn decided that if he was going to make another Islands record, he’d do it without a deadline. He also wanted to work with outside producers, which would be his first time since 2009’s Vapours. He reached out to that album’s producer, Chris Coady (Beach House, Yeah Yeah Yeahs) , and asked Islands drummer Adam Halferty and guitarist Geordie Gordon to join him in a recording session at Sunset Sound in Los Angeles.

“At the time I still wasn’t sure what this new music was going to be, or if coming back to Islands even made any sense,” says Thorburn. “But once we started playing, it quickly became clear this would be the next Islands album.”

Five years after Islands went dormant, Nick resurrected the band, who reemerge this year with their 8th album, Islomania. More than two years in the making, Islomania is a culmination of things Thorburn learned from the intervening period and all the things he’d accomplished during the band’s initial ten year run.

That initial session at Sunset Sound also featured Mike Stroud (RATATAT) on guitar, who then invited Thorburn to his studio in the Catskills, where they worked on another song (“A Passionate Age”). With Islands bassist Evan Gordon soon brought into the fold, Islomania slowly came to life over the coming year, with more sessions in LA involving producer Patrick Ford (Tanlines, !!!) and Coady. When the songs had been sufficiently finessed, they brought on John Congleton (Sharon Van Etten, St. Vincent) to mix and Joe LaPorta (Vampire Weekend, David Bowie) to master.

“I was determined to let the record breathe, let the process take as long as it needed. I wanted the freedom to rework the songs as we went along,” says Thorburn, noting that the band’s simultaneously released 2016 albums Taste and Should I Remain Here at Sea? were completely recorded in a three-week span. Through this unhurried process, Islands found an entirely new form for their idiosyncratic blend of art rock and synth-pop, ultimately arriving at their strongest record yet.

Over the course of ten groove-heavy songs, Islomania flits from the ridiculous to the sublime. On the surface, these songs are all blissful hedonism, tracing the reckless abandon of a progressively wild Friday night. But pick at the scab and there’s a darkness. Themes of futility and repetition (“Closed Captioning”), a yearning for transcendence (“Natural Law Party”), a need for understanding (“A Passionate Age”) and a deep desire for vulnerability and intimacy (“We Like to Do it With the Lights On”) thread the album. “Tension and release exist throughout. Every song here begins bottled up, but there’s always a cathartic release by the end. There’s darkness and doubt in every crevice of this record, but there’s always a release,” Thorburn says.

After kicking off with the album’s sweetly tropical title track, Islands intensify the mood with “We Like to Do It With The Lights On”: a dance song whose dreamy exuberance betrays a more profound message. “I wanted this record to be a celebration of finding joy and pleasure in life,” says Thorburn. “I think it’s important to remember that, despite the darkness and conflict and pain, there’s still goodness in the world.”

Thorburn’s distinct brand of marrying upbeat and urgent melodies with comically dark lyrics remain intact, with songs like “Closed Captioning” interweaving jagged horn arrangements with grim lyrics about the end of the world. “That one came from having to turn on closed captioning while watching a ‘prestige’ TV show because the style of acting nowadays seems to be everyone mumbling,” Thorburn says. “I thought the concept of closed captioning was a fairly decent metaphor for the divisive nature of this country, and the inability to understand one another.”

The Stroud-produced track “A Passionate Age” rides the line between dizzy and chilling in its vocoder-warped reflection on modern life’s endless chatter. And on “Never Let You Down”, Islands present one of Islomania’s most tender-hearted tracks, a radiant yet mournful piece of synth-pop.

“The album is all about transcending- In the political, the spiritual, the emotional and the physical sense,” Thorburn says. “After Natural Law Party” – which features an interpolation of Arthur Russell’s early disco outfit Loose Joints and their song Tell You (Today)- “culminates in a plea to ‘set my body free’, transcendence is achieved. Never Let You Down serves as the beginning of a come down, though. The drugs have worn off, the doubt is creeping in, but you push on, try to keep the party going. It’s a bit of a reckoning, or a gradual return to earth- with hopefully a little enlightenment in tact. There’s a failed love song in there, too- this hopeless idea that you can always be there for someone, but both the narrator and the subject know it’s a lie, though they choose to believe it,” Thorburn says.

By the time Islomania closes out with “Gore” – a song Thorburn synopsizes as “the bloom coming off the rose”- the spirit has returned to the body, descended. All that’s left now is death. And this is Thorburn’s party record!! Despite the heaviness, the delicately articulated moods, and the moments of melancholy and unease, the album sustains a heady effervescence that’s undeniably tied to the spirit of its creation.

“This record is way more playful than I usually allow myself to be, or have allowed myself to be in the last 15 years of making music with Islands,” says Thorburn. “It made me remember why I got into this in the first place. I want everything to have meaning and intention, but I also want to leave room to get a little lost. I want the listener to feel enchanted by the music, and I think we absolutely achieved that with this one. This is the best album I’ve ever made, and I don’t think it would have been possible without leaving it all behind.”

Islomania will be released on June 11th, 2021 via Royal Mountain Records.
You can pre-order it here.