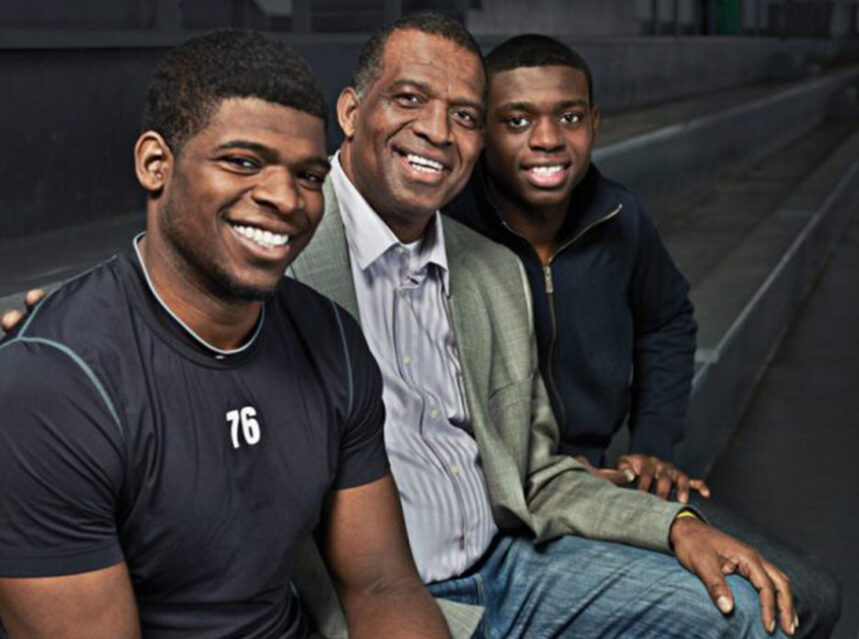 Karl Subban – How We Did It by Karl Subban – Karl Subban certainly knows how to motivate, inspire and bring the best out of young people. He has been doing that for over 20 years as a schoolteacher and principal in Toronto; and with his wife Maria, raised five children to follow their dreams and realize their potential. His two daughters Taz and Tasha followed in his footsteps to become educators; and sons P.K., Jordan and Malcolm are enjoying successful careers as professional hockey players in the National Hockey League.

Karl, who just recently retired from his educational career, realized that working with children as a parent, teacher and as a coach has been his life’s passion. And he also realized that he wanted to write a book – and do some public speaking engagements – about what it was like to be a motivating force as a father and educator.

“I didn’t know what the content of the book would be. But as the boys (P.K., Jordan and Malcolm) climbed the hockey ladder, our story became more of a public story and became really intriguing to so many people,” he said. “From that came the question ‘how we did it?’ And then I figured it would be good to write a book as an answer to that question.”

The end result is How We Did It, a combination memoir and how-to book, that chronicles Karl’s life from his origins in Jamaica; to the struggles of living the Canadian dream first in Sudbury and then Toronto; to switching his dreams of professional sports glory in hockey and basketball to being an educational force in the classrooms of Metro Toronto; to being a caring, nurturing and inspiring father to a family of five children.

During a recent interview at a downtown Montreal hotel as part of his cross-country tour to promote the book (which also included an appearance and book signing at the Bridgestone Arena in Nashville, where P.K. currently plays as a member of the Nashville Predators), Karl admits the book’s overlying message is how the idea of potential is more like a lens through how people see all children.

Another overlying message that the book conveys is how it’s OK for parents to have dreams for their children when they’re young, so it could help them develop their own dreams and ambitions as they get older. “There is nothing wrong with that. There is one quote that has guided me as a parent and a leader, and that is ‘clear the way, pave the way, and get out of the way.’ My job as a parent was to pave the way for my children to dream, so that they can take up the baton or come up with their own dream,” he said.

For Karl, who is a diehard hockey fan – especially of the Montreal Canadiens (his all-time favorite player on the team is Hall of Fame goalie Ken Dryden) – for 47 years, that idea of dreaming for his children really came in the form of seeing his three sons develop careers in pro hockey, which started at an early age and realized that it would be a career for them when all three were drafted by the same minor league hockey team, the Belleville Bulls of the Ontario Hockey League (OHL), which led to P.K., Malcolm and Jordan getting drafted into the NHL via the Canadiens, Boston Bruins and Vancouver Canucks, respectively.

And through the long trail of years of early mornings and travelling thousands of miles to get their sons to games (and watch them play), both Karl and Maria gave their unconditional love and support as they made their way to the NHL. “I never confused my role between a dad and a hockey dad. I wanted to be more of a dad, because that was my first responsibility. And I believe that Maria and me created the right environment for the boys to develop as hockey players,” he said. “We provided them with unconditional love and support; that was a given. I mean, we just didn’t love P.K. more because he scored a goal, or loved Malcolm more because he stopped a goal.”

“However, there were times that I did get carried away as both a dad and a hockey dad; you’re always learning and growing as a parent, and there was no one to give us a manual or a 1-800 phone number to call. We wanted our kids to get better, and it was the mindset of me and Maria to get better as time went on and we did just that,” he added.

Karl believes that if a career in hockey didn’t pan out for his three sons, they would certainly follow the career path that was taken by their sisters Taz and Tasha in the educational field. “Thanks to the environment they grew up in, they love children. It’s natural for them to be with their nieces and nephews, pick them up and play with them,” he said. “I really believe that they would have been educators like my two daughters. People don’t always do what we tell them to do, they do what we do.”

And although P.K. has been playing with the Predators for nearly two years since that blockbuster trade that sent him to Nashville, Karl is amazed at how the Canadiens fans have never forgotten his contributions to the team in particular, and the Montreal community in general during his time with the Habs (which included winning the Art Ross Trophy for best defenceman).

“Hockey is a religion here in Montreal. And for the average Canadiens fan, they revere all the players; and that’s how many fans in the city feel about P.K., because of the way he plays the game, his personality, and the work he has done in the city,” he said. “It’s a love affair that’s not going to end anytime soon.”