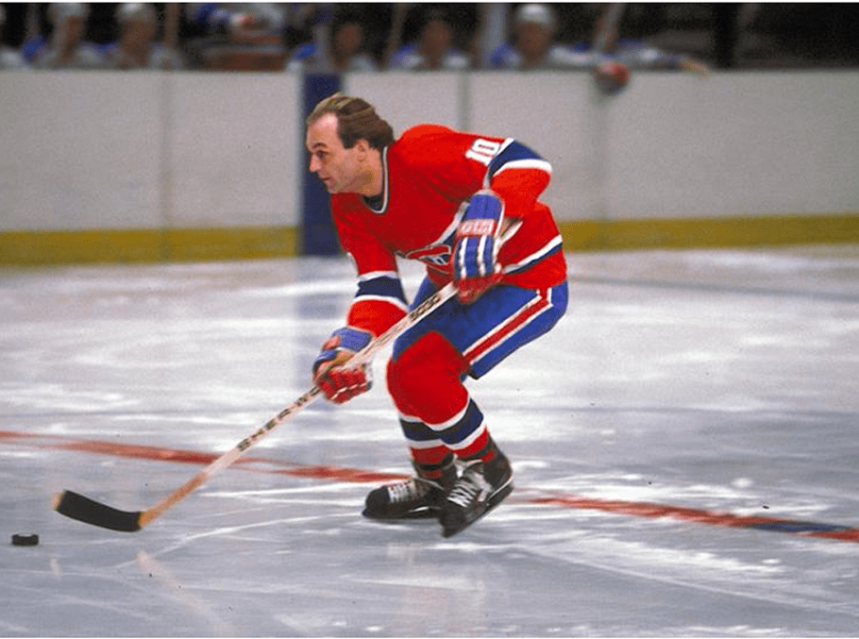 TORONTO, April 22. 2022 – Montreal Canadiens Hockey Hall of Fame legend, Guy Lafleur “The Flower” has died at age 70. Lafleur had been battling lung cancer for many years.

“We are deeply saddened to learn of the death of Guy Lafleur. All members of the Canadiens organization are devastated by his passing. Guy had an exceptional career and always remained humble, accessible and close to the Habs and hockey fans in Quebec, Canada and around the world. Throughout his career, he allowed us to experience great moments of collective pride. He was one of the greatest players in our organization while becoming an extraordinary ambassador for our organization and for hockey,” said Geoff Molson, owner, President and CEO of the Montreal Canadiens.

The flashy, speedy prolific goal-scoring Lafleur was legendary for scoring big goals and leading the Montreal Canadiens to five Stanley Cups in the 1970’s.

Born September 20, 1951 in Thurso, Quebec, Guy Damien Lafleur would become one of the greatest legends in Montreal Canadiens and NHL history, standing alongside Maurice Richard and Jean Beliveau as the biggest stars to play for the game’s most legendary franchise.

In the 1979 game seven semi-final with the Boston Bruins up 4-3 and just 1:41 remaining in the game seven of Lafleur on the power play initiated a breakout, bursting up the ice, sending the puck in deep then receiving the puck back for a one-timer from the top of the circle, beating Bruins’ great, Gilles Gilbert low to the stick side to tie it at 4-4. That led to a dramatic overtime and a goal by Yvon Lambert to send the Habs through to the final, where they defeated the New York Rangers 4-1.

In addition to winning five Stanley Cups with the Habs inluding four straight from 1976-1979, and his first cup with the Habs was in 1973 Guy Lafleur was the NHL’s top scorer winning the Art Ross Trophy three times, and the Hart Trophy as the NHL’s most valuable player, twice. Lafleur is also the Montreal Canadiens all-time leading scorer with 1276 points.

A statement released by National Hockey League Commissioner Gary Bettman, reads: “You didn’t need to see Guy Lafleur’s name and number on his sweater when ‘The Flower’ had the puck on his stick. As distinctively stylish as he was remarkably talented, Lafleur cut a dashing and unmistakable figure whenever he blazed down the ice of the Montreal Forum, his long blond locks flowing in his wake as he prepared to rifle another puck past a helpless goaltender – or set up a linemate for a goal.”

The Thurso, Quebec native was selected first overall by the Montreal Canadiens in the 1971 NHL Draft, Lafleur joined the organization with the daunting task of following in the footsteps of franchise legends Maurice Richard and Jean Beliveau. He somehow met those expectations, becoming the Canadiens’ all-time leading point scorer and one of the most beloved players in franchise history – the torch was passed to him and he held it high.

Bettman also said: “In 1974-75, his fourth year in the NHL, Lafleur transformed from productive to prolific, recording the first of his six straight seasons of at least 50 goals and 119 points. He won back-to-back Hart Trophies as League MVP in 1976-77 and 1977-78, three straight Art Ross Trophies as NHL scoring leader from 1975-76 to 1977-78, and led the playoffs in scoring three straight seasons (1977, ’78 and ’79), winning the Conn Smythe Trophy in 1977. On one of the most star-studded teams in hockey history, he was the marquee performer, lifting fans out of their seats chanting, ‘Guy! Guy! Guy!’ as he dazzled en route to six straight selections as NHL First-Team All-Star right winger and five Stanley Cups.

The Toronto Maple Leafs took to Twitter to say, “Guy Lafleur was an iconic player and competitor. A legend of our game that will be greatly missed. Our thoughts go out to the Lafleur family and the @CanadiensMTL organization.”

While Prime Minister Justin Trudeau issued a statement saying: “Guy Lafleur, or “The Flower,” was unlike anyone else on the ice. His speed, skill, and scoring were hard to believe. A record-setter and a five-time Stanley Cup champion, he inspired countless Quebecers, Canadians, and hockey fans around the world. We’ll miss you, Number 10.”

“As a child, Mr. Lafleur loved the game so much that he would sleep in his hockey equipment so that he could jump on the rink as soon as he woke up. Later in life, his impressive shot and skating prowess earned him the nickname le ‘Démon blond’, and won his adversaries’ admiration, winning him three Lester B. Pearson Awards for most outstanding player, as decided by fellow players. To this day, he remains the all-time points leader of all those who have worn ‘la Sainte-Flanelle’ of the 24-time Stanley Cup champion Montreal Canadiens,” said Trudeau in an official statement.

“Inducted into the Hockey Hall of Fame in 1988, Lafleur was named one of the 100 Greatest NHL Players during the League’s Centennial celebration in 2017. He remained adored in Quebec throughout his post-playing days, signing autographs for hours at countless appearances as a franchise ambassador, having forged a special and enduring bond with the fans of his home province and adopted city.

“The National Hockey League mourns the passing of the iconic Guy Lafleur and sends its deepest condolences to his wife, Lise; his sons, Martin and Mark; his mother, Pierrette; his granddaughter, Sienna Rose; his four sisters and the entire Lafleur family; and the millions of hockey fans he thrilled.”

After Lafleur was inducted into the Hockey Hall of Fame in 1988 and his No. 10 jersey was retired by the Canadiens on February 16, 1985, Lafleur returned the next season. “The Flower” continued playing for the New York Rangers and Quebec Nordiques until 1990-91, becoming the second player after Gordie Howe to play in the NHL after being enshrined in the Hall of Fame.

In 1980, Guy Lafleur was appointed an Officer of the Order of Canada. He was also inducted into Canada’s Sports Hall of Fame in 1996, and appointed a Knight of the Ordre national du Québec in 2005.

“He leaves behind an incredible legacy that will be remembered for generations, his statue outside the Bell Centre testament to the enduring impact he made on a team, a province, and an entire sport,” the Canadiens’ statement reads.

Details regarding the upcoming schedule to honour Guy Lafleur and celebrate his life will be announced soon.