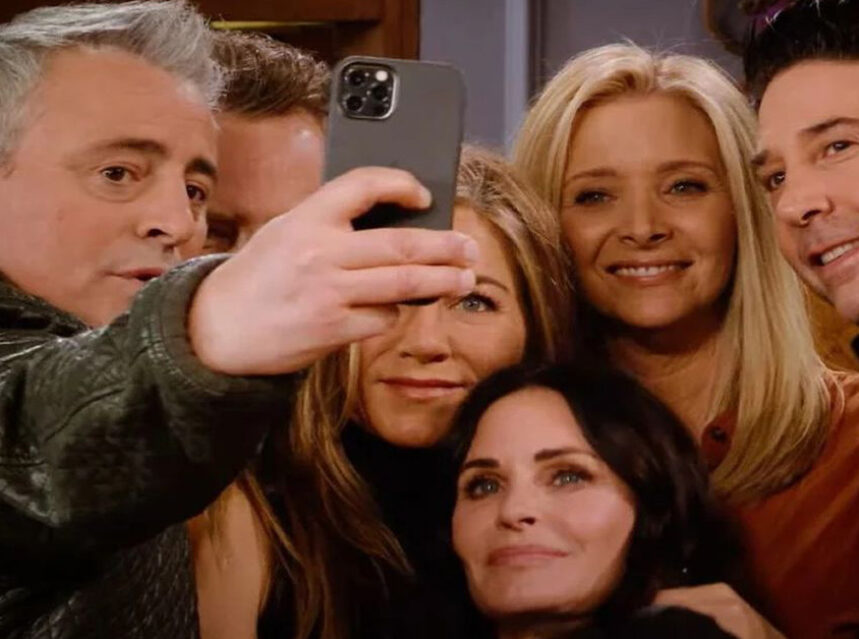 What a year it has been! The world has collectively seen more ups and downs (mostly downs) than a roller coaster ride. Never had anyone in their wildest fantasy thought that the world would be brought to a standstill. Confining everyone to their homes and limiting human interaction.

The pandemic could’ve turned much worse, but thanks to our stash of streaming services for keeping us sane and entertained throughout the pandemic. It was majorly because of these OTT services that the lockdown was bearable.

Things may have been standing still, but the entertainment industry kept us all hooked with their amazing content, and some of the best, if you ask us. Some were brand new, while others brought back the nostalgic touch with their comebacks and literally broke the internet.

So without any further ado, let’s see the movies and shows that literally “Broke the Internet” with their releases during the pandemic.

This has to be the ultimate highlight of the whole pandemic. “Friends: The Reunion”, also known as “The One Where They Get Back Together” was something that the “Friends” fans were eagerly waiting for, for the past 17 years. Officially “The Best Show Ever” according to the viewership numbers, as being watched for over a 100 billion times (a fact presented in the “Friends: The Reunion” episode).

According to sources, a record 29% of US streaming households watched “Friends: The Reunion” special on May 21, 2021, the first day of its streaming on HBO Max. And these are just the numbers for TV viewership that are connected to the internet. People who streamed the special on mobile and computers are far more.

As the special has been released just recently (not even a month has passed), you can still watch on HBO Max the special episode, before the spoilers get to you. Such was the hype of the show that people went to extreme lengths to get HBO Max in Canada, UK, and other geo-restricted regions that they invested in various VPN and proxies to get the streaming service in Canada and other regions.

And according to howtowatch.ca, you can stream HBO Max, Hulu and any other geo-restricted service in Canada using a reliable VPN provider.

Set in 1960’s cold war era, the show revolves around the journey of an orphaned girl Beth Harmon who becomes the greatest chess player of the world and world’s first female chess master by defeating chess grand masters all around the world.

The limited series was released on Netflix on October 23, 2020, bagging more than 62 million viewers. And these are just the numbers for the first 28 days after the release. The show ranked No.1 in more than 63 countries and was in the top 10 in 92 countries. Making it Netflix’s best limited series, ever.

“The Mandalorian” Season 2, carries the torch for “Star Wars” and baby Yoda fandom, considered as one of the biggest fandoms of the world. Season 2 released on Oct 30, 2020 on Disney+, has an IMDb rating of 8.8 and 93% by Rotten Tomatoes.

The release of season 2 set new records as according to Nielsen, that rates the viewership according to minutes watched, “The Mandalorian” became the No. 1 most watched streaming series in the US. It is recorded that viewers spent 1.336 billion minutes watching the series.

Despite the fandom and popularity, it is the first time that “The Mandalorian” had made it to the top in terms of number of minutes streamed, bringing Disney+ to par with Netflix, Amazon, Hulu and other streaming giants.

Based on the famous comic book series by the same name, filmed in the Toronto and Hamilton area, and released by Amazon Prime, “The Boys” premise is set in the world where there are superheroes. Not just the good ones, but some rogue ones too that are plotting to bring each other down.

It was the first non-Netflix show to have broken Nielsen’s top 10 ranking. Moreover, its opening week beat both Stranger Things and The Mandalorian opening week. Since the show has premiered it has become Amazon’s most in-demand original show.

Second (and probably the last) series to the Borat series, and releasing after 14 years of original “Borat” was a highly acclaimed movie in the pandemic. The first movie “Borat” which was released back in 2006 was an international sensation and made almost $260 million. “Borat 2” continues the legacy of Borat Sagdiyev, a Kazakh journalist who visits America, and his adventures over there.

Launched on Amazon Prime, with genre describes as comedy, controversial comedy and even mockumentary it has been hailed as the second most successful PVOD of 2020. In short we can say that the movie was a “Great Success”

One thing that this pandemic can be credited for is bringing out innovation. And that is exactly what Hamilton has been. Adapting the Broadway sensation into a movie with most of the original Tony prize winner cast, director Thomas Kail has perfectly converted a pure theatrics experience to a cinematic one. Enhancing the experience to a level that even live theatre couldn’t give.

Hamilton beautifully narrates the story of Alexander Hamilton, an orphan boy who writes his name into the pages of history by playing an instrumental role in American revolution and becoming the first Secretary of the Treasury of the United States.

The movie was released by Disney+ and has an astounding 97% rating on Rotten Tomatoes. The original Broadway play won 11 Tony and Pulitzer awards.

Never in the history of movies, has the same movie been released officially twice. This was the case with Justice League. The movie was to be released in 2017, directed by Zack Snyder. But due to the death of Snyder’s daughter he had to step down and a movie was offered to Joss Whedon.

The movie was an overall disappointment, which led to Warner Bros production (backed by loyal fans with the hashtag #ReleaseTheSnyderCut) to re-release the movie but with Snyder’s original cut.

The movie was released in March 2021 on HBO Max and was an instant hit. It generated around $266 million in revenue and became Crave’s most streamed content of all-times.

These were the movies and shows that “Broke the Internet” during the Pandemic. and played an instrumental part in making the lockdown bearable, which has lingered on for more than a year. But the sad part is that the pandemic is nowhere near its end. So stay home, stay safe, follow COVID-19 protocols and take care of yourself and people around you.