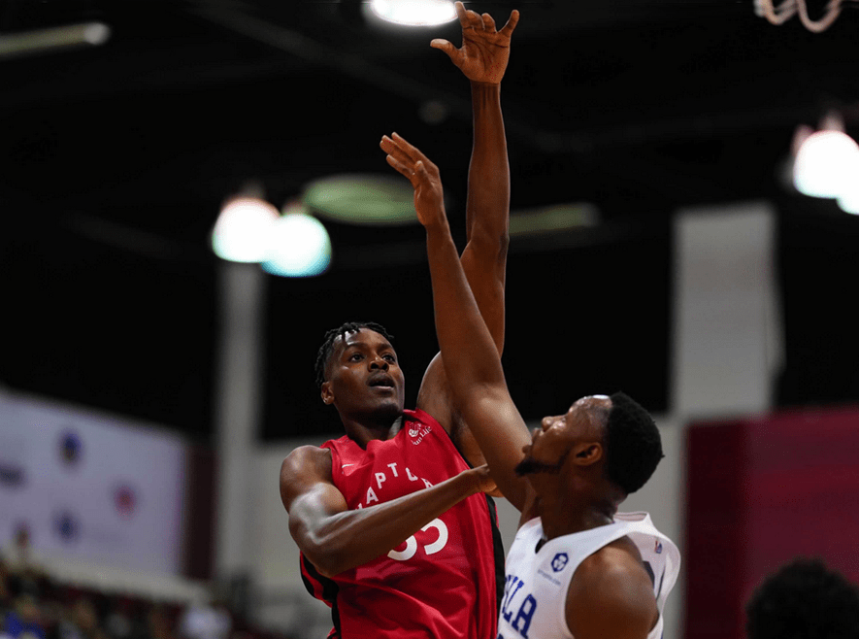 TORONTO, August 3, 2022 – Raptors fans can breathe easier after yesterday’s official signing announcement. Although it has taken a couple of months, the Raps’ 33rd overall selection in the 2022 NBA Draft, Christian Koloko has finally signed a multi-year contract with the Toronto Raptors.

The Raptors say Koloko has had a bit of a whirlwind summer between getting drafted, playing in Summer League, meeting press requirements for both media sessions and photoshoots, and he’s also been involved in several runs with players who are now officially his teammates. The Raptors say the contract signing was always a formality and with training camp less than a month away, the team’s roster for their time in Victoria, B.C. is set.

“Growing up we dreamed about stuff like this but now it’s actually happening,” Koloko said. “For me to be here right now, I’m just trying to enjoy the moment and make the best of it.”

When Pascal Siakam won the Most Improved Player award in 2019, Koloko wasn’t a little child watching that moment, he was already 19 and heading to Arizona for college, but chasing the NBA dream and being from Douala, Cameroon — the same hometown as Siakam — made the message resonate. Siakam is the first from Douala to make it to the NBA and has done so in style, having already won an NBA championship, made two All-NBA teams, an all-star appearance, and of course the MIP award mentioned previously within his first seven seasons.

“He means everything,” Koloko said of what Siakam means to Douala. “Showing people like me that anything is possible. I think he said in his speech when he won the MIP, (Nelson) Mandela said everything seems impossible until it’s done. That’s what he just shows people, and continues to get better. Even this year, he had that injury and came back. Pretty slow start and kept working on his game, and he showed people who he is. Just that perseverance he showed, he just means everything to the city of Douala, for sure.”

Siakam’s accomplishments have served as a driving force for Koloko and helped him with his own meteoric rise at Arizona from zero starts and eight minutes per game in his rookie season to starting all 37 games as a junior, averaging 12.6 points, 7.3 rebounds, and 2.8 blocks, winning 2021-22 Pac-12 Defensive Player of the Year, Most Improved Player, and making All-Pac-12 First Team. All that is why the Raptors interviewed the 7-foot-1, 230-pound centre at the Draft Combine in Chicago, ranked him in their top 25 prospects for the 2022 NBA Draft despite being unable to bring him in for a workout due to visa complications, and felt compelled to pick him when he was available at No. 33.

Toronto say in their press release that they have had Koloko on their radar since 2017, when he first attended Basketball Without Borders Africa. Watching in L.A. with family, he knew joining the team was a possibility if he wasn’t taken in the first round and was ecstatic about joining a franchise run by Masai Ujiri when his name was called.

“I’ve built a really good relationship with Masai,” Koloko said. “Every time I saw them they showed love to me and having them pick me in this draft means everything. I’m forever going to be thankful for them and I’m going to go out there and give everything I have for them.”

Based on Koloko’s play during Summer League — where he averaged 7.8 points, 4.2 rebounds, and 2.2 blocks — and film from Arizona the Raptors say Koloko clearly fills “an obvious, glaring need as a rim-protecting big man on a roster full of athletic wings.”

The team say Koloko shouldn’t be expected to be a major contributor right away. Raptors head coach Nick Nurse expects him to probably play spot minutes with the senior club while getting extended time with the Raptors 905. Meanwhile Eric Khoury, recently named head coach of the G League club and in Vegas coaching the squad, is intrigued by what lies ahead.

“My first impressions of Christian are that he’s definitely everything he’s been advertised to be,” said Khoury, “He was such an amazing defensive presence on the court, he’s got great hands, he’s able to set a great screen, roll, and be a vertical threat and when he’s in the game the paint just looks like it’s completely walled off. Players — not only is he blocking shots, they just stop taking shots in the paint. He had a great Summer League and now we’re excited to keep working for the rest of the summer. Who knows what his role will be next year with both clubs but it’s been a great start.”

Even if Koloko could be a bit of a project, it’s hard not to be tantalized by his potential. Among eligible centres at the draft, no one had a higher standing vertical reach than Koloko’s 11’9” and his movement at his size appears fairly smooth for someone considered still to be quite raw.

Koloko credits his abilities to playing a great deal of soccer as a kid, primarily as a striker, which required making quick movements and bursting into open spaces, all skills that translate well to the court.

“A lot, when you’re on the soccer field you’ve gotta be able to move,” Koloko said of how much the sport has influenced his mobility. “For me, I was always tall for my age, everybody was always shorter than me so I had to adapt and be quick on my feet, quick when changing direction so I think it really helps me in basketball, being able to move the way I move.”

Siakam has a similar athletic history and affinity for soccer and the two will probably keep each other company cheering on Cameroon when they’re in action during the FIFA Men’s World Cup that will occur during the NBA regular season – late November to mid December – for the first time. They can have a bit of a friendly rivalry in club football since Koloko is a huge Barcelona fan while Siakam roots for Real Madrid.

The 22-year-old has had that fantastic rise through college, and now with a Raptors franchise renowned for development, as well as the apparent gratitude he has for an opportunity to play under Ujiri and alongside Siakam, it’s fair to say environment, effort, and energy won’t keep him from whatever he maxes out to be as a basketball player.

“There’s probably, positionally a chance for him to fight his way in there and get some time,” Nurse said of Koloko’s ability to contribute. “You never know on Day 1 what things look like when the whole roster shows up there fresh and healthy. As we’ve seen, there’s always a lot of movement. I would imagine that there would be a chance at some point, it’s just a matter of when that comes. Then, you just never know.