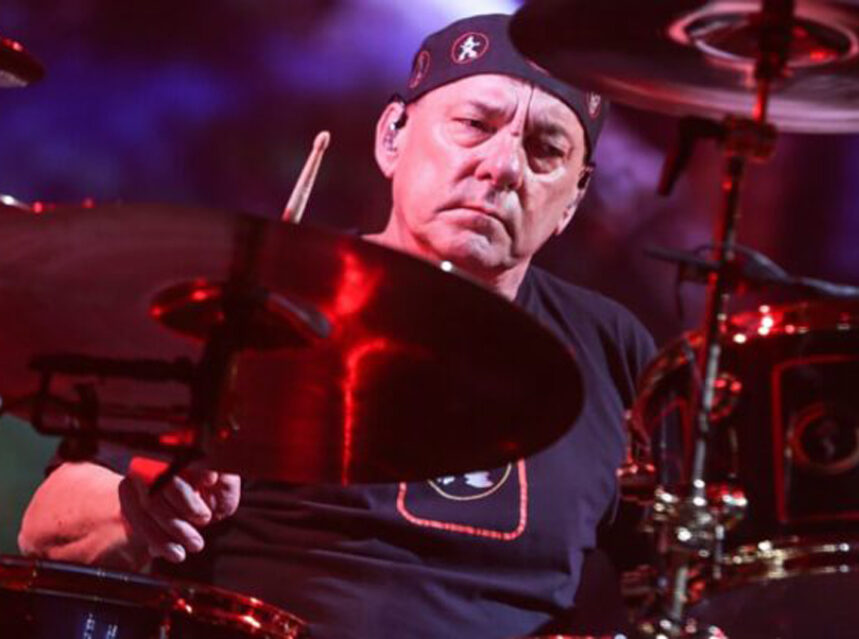 Legendary drummer of Rush, Neil Peart has died at age 67 according to a representative of Geddy Lee. The hugely influential drummer and lyricist of Rush recorded 18 studio albums with the band, is an inductee into the Canadian Music Hall of Fame and was made an Officer of the Order of Canada.

Rolling Stone reported the Rush drummer “died Tuesday, January 7th, in Santa Monica, California at age 67. The cause was brain cancer, which he had been quietly battling for three years, according to Elliot Mintz, a spokesperson for the Peart family. A representative for the band confirmed the news to Rolling Stone.”

Rush issued a statement on Twitter confirming their band mate and “soul brother’s” for over 45 years bravely battled brain cancer (Glioblastoma) for three and a half years. Glioblastoma is the same cancer that took the life of The Tragically Hip’s iconic frontman, Gord Downie.

Peart was part of Rush’s final tour in 2015, celebrating the band’s 40th anniversary.

Peart, from Port Dalhousie, Onatrio joined the Toronto-based band in 1974, teaming up with iconic guitarist Alex Lifeson and legendary Toronto bassist/lead singer Geddy Lee. Rush went on to produce 10 platinum albums in the United States from 1975 through 1981.

Toronto Mayor John Tory made a statement on Twitter about Neil Peart’s passing offering condolences to the family and saying he was pleased to meet Peart when he gave Rush the Key to the City.

Neil Peart was considered to be a rock virtuoso both for his playing style and his lyrics, in some cases inspired by the writings of Ayn Rand as well as science fiction.

Peart helped make the power trio one of the most influential classic-rock bands in the world and cited The Who’s former drummer, Keith Moon and Led Zeppelin’s Jon Bonham as two of his drumming influences. Other influences include jazz and big band drummer aficionados Gene Krupa and Buddy Rich.

A ‘drummer’s drummer” Peart inspired budding and pro drummers the world over and his gift of the written word enabled him to author seven non-fiction books, the latest released in September 2016.

“Neil is the most air-drummed-to drummer of all time,” former Police drummer legend Stewart Copeland said in 2015. “Neil pushes that band, which has a lot of musicality, a lot of ideas crammed into every eight bars — but he keeps the throb, which is the important thing. And he can do that while doing all kinds of cool shit.”

Foo Fighters lead singer and former Nivana drummer, Dave Grohl posted some heartfelt thoughts on Twitter referring to Neil Peart as having “the hands of god,” saying he was a “giant in the history of rock and roll” and an “inspiration to millions with an unmistakable sound.” Grohl went on to say that the Rush iconic album “2112” marked the first time he had ever really “listened to the drummer.” He goes on to say that Peart “was called ‘The Professor’ for a reason: we all learned from him.”

Sadly, Peart’s 19-year-old daughter, Selena, died in the summer of 1997 in a car accident on her way to university in Toronto. Then, just five months later, Selena’s mother – Peart’s common-law wife of 23 years, Jackie — succumbed to cancer. Peart remarried in 2000.

Needless to say, the music industry has lost another legend. Neil Peart and Rush put Canada on the map of music.

Is COVID-19 saving babies from premature birth in Canada?

Why Music Lessons Matter More Than Ever

Toronto is getting a new fire station

Book Review – TOO MUCH AND NEVER ENOUGH by Mary L. Trump

DVP is closed this weekend, here’s why

Air Canada is rolling out all new Aeroplan Program this fall

How to see the Perseid meteor shower that peaks tonight