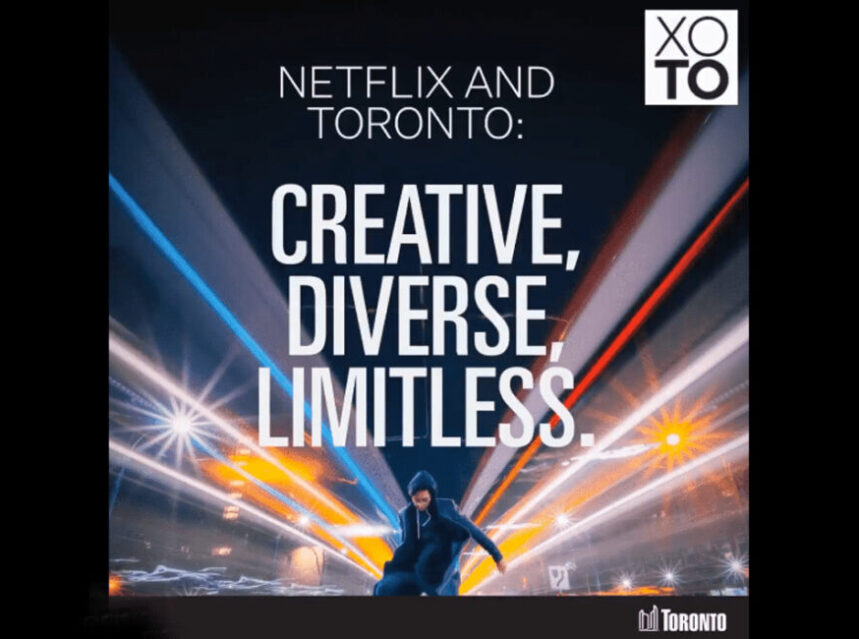 Netflix officials delivered the news to Mayor Tory in a virtual meeting this morning with Deputy Mayor Michael Thompson (Scarborough Centre), Chair of the City’s Economic and Community Development Committee, and Councillor Paula Fletcher (Toronto-Danforth), Chair of the City’s Film, Television and Digital Media Advisory Board.

“Our pitch was clear – Toronto is a film friendly city which welcomes and celebrates the screen industry, the quality and diversity of our talent pool is second to none, and we have a robust and ever expanding production and post-production industry,” said Tory.

“In very difficult times this is the kind of news that gives us hope! We have been working hard to make sure Netflix’s new Canadian office would be in Toronto,” said Mayor Tory. “We put together a bid book in days to make the case for Netflix to locate here and engage with our creative industry.

Prior to today’s announcement, Toronto was already the proud home of one of Netflix’s two Canadian Production Hubs. Through the hub, Toronto’s talented crews have been essential to the success of international productions such as Jupiter’s Legacy, The Umbrella Academy and The Queen’s Gambit.

Netflix has contributed substantially to the development of Toronto’s infrastructure and workforce.

“As we grow our business and presence all across Canada, we’re excited that Toronto will be our first local office. We’re looking forward to opening our doors and building on the great work we’ve started with our creative partners to bring more Canadian artists and stories to the world,” said Ted Sarandos, Co-CEO and Chief Content Officer, Netflix.

With the new office in Toronto at a yet to be determined downtown location, Netflix will expand its commitment to working with Canadian talent. Building on the success of uniquely Canadian shows such as Schitt’s Creek, Blown Away and Anne with an E, Netflix will work with Canadian creators to bring stories from Canada to the world.

“As one of the most diverse cities in the world, Toronto is proud of our locally-based, globally-minded talent, and looks forward to being home to Netflix as they support the best creators here, and from every part of Canada,” reads a City of Toronto press statement. “Netflix and the City have a shared commitment to supporting the growth and diversification of the sector, working with communities to support pathways to opportunities. As the home of mega-stars and mega-stages, with so much more talent to be discovered, the City welcomes Netflix’s enhanced presence and partnership in original content production.”

In 2019, the film, television and digital media sector contributed $2.2 billion to Toronto’s economy and employed more than 30,000 people. The film and television industry has adapted to COVID-19 regulations, with robust health and safety guidelines and will be a driver of ongoing economic recovery in 2021 and beyond.

“I want to thank Netflix for making the right choice for their company and for our city. This has been a tough year for Toronto and all cities, all businesses, and all residents but today’s news is one more example of our determination to help sectors get through the pandemic, to protect and grow jobs in our city, and to make sure we come back stronger than ever,” explained Mayor Tory.

Several sources say Netflix will be opening its temporary location in Toronto this summer until a suitable space downtown has been secured.