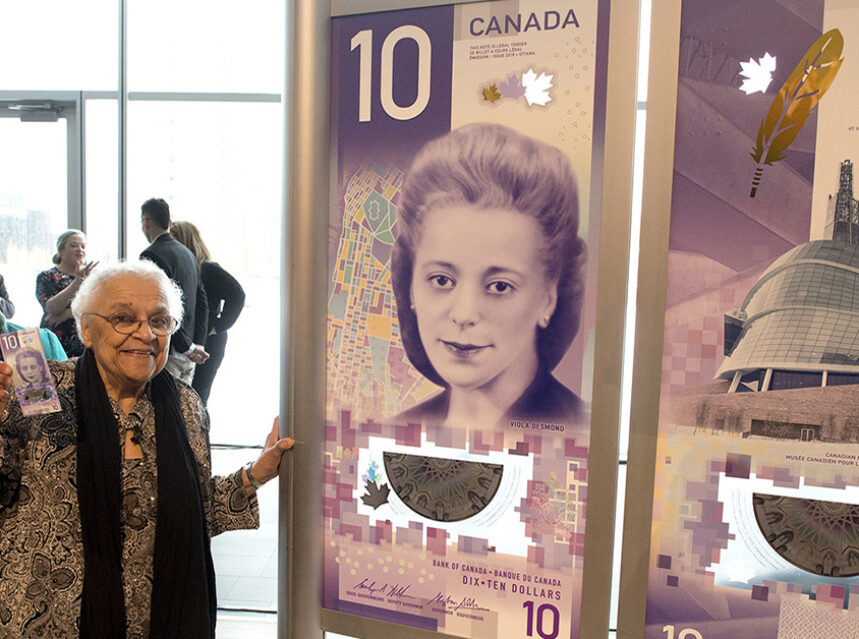 New $10 Canadian note with Viola Desmond – On April 15, 2010, nearly 64 years after she was jailed, convicted and fined for defiantly refusing to leave a whites-only area of a Nova Scotia movie theatre, Viola Desmond was finally cleared of her criminal conviction.

The late Mrs. Desmond, who appears on Canada’s new $10 bank note, which will begin circulating at the end of the year, was a successful Canadian businesswoman whose case was among the first known legal challenges to racial segregation in Canada by a Black woman. She received a free pardon and apology from the Government of Nova Scotia on April 15, 2010.

It marked a historic event for Canada in its ongoing journey toward achieving human rights. It was also the first time the Nova Scotia government granted a free pardon posthumously. The rarely used free pardon is “based on innocence and recognizes that a conviction was in error,” according to the government, and is “an extraordinary remedy … considered only in the rarest of circumstances.”

“This is a historic day for the province of Nova Scotia and a chance for us to finally right the wrong done to Mrs. Desmond and her family,” said then-Premier Darrell Dexter at the time. “This is also an opportunity for us to acknowledge the incredibly brave actions of a woman who took a stand against racism and segregation.”

The free pardon stemmed from an incident on November 8, 1946, when Desmond was forcibly removed from the movie theatre in New Glasgow, Nova Scotia, for refusing to move to the balcony seats, where she was instructed to sit, to comply with the unwritten racially restrictive admissions policy of the theatre.

She was charged with attempting to defraud the provincial government, accused and ultimately convicted, of failing to pay a one-cent amusement tax—the difference between the cost of a seat downstairs and in the balcony.

While Desmond was unsuccessful in her subsequent efforts to quash her criminal conviction, the legal challenge she sparked touched a nerve within the Black community and added to the growing consciousness regarding racial discrimination in Nova Scotia.

“This closes an erroneous chapter in the history of this province and allows a new one to begin,” said then-Lieutenant-Governor Mayann Francis during the formal pardon ceremony in 2010. “I am confident that the case of Mrs. Viola Desmond will be the focus of scholarly and human rights research for years to come. “It is a historic moment for Nova Scotia and for Canada, and I am proud to be a part of it.”

Nearly a decade after she was pardoned, a new milestone was reached on March 8, 2018, when the new $10 bank note featuring Mrs. Desmond’s portrait was unveiled to Canadians.

Desmond’s depiction on a Canadian bank note is the latest recognition of her fight for human rights and social justice, as well the wrongful nature of her criminal conviction.

“What happened to my sister is part of our history and needs to remain intact,” said Wanda Robson, Mrs. Desmond’s sister, in her response to the free pardon. “We must learn from our history so we do not repeat it. If my parents were here today, it would warm their hearts to see Viola recognized as a true Canadian hero.”

Watch for the $10 note featuring Viola Desmond and the theme of social justice and the struggle for rights and freedoms when it begins to circulate at the end of 2018.

And stay tuned for the launch of the next Bank NOTE-able campaign, in which the Bank will reach out to Canadians to seek input on the portrait subject and design of the next $5 note to continue to celebrate more iconic Canadians.

Visit bankofcanada.ca to learn more about the design and security features of Canada’s currency and follow the Bank on Twitter (@bankofcanada) for the latest news about Canadian bank notes.