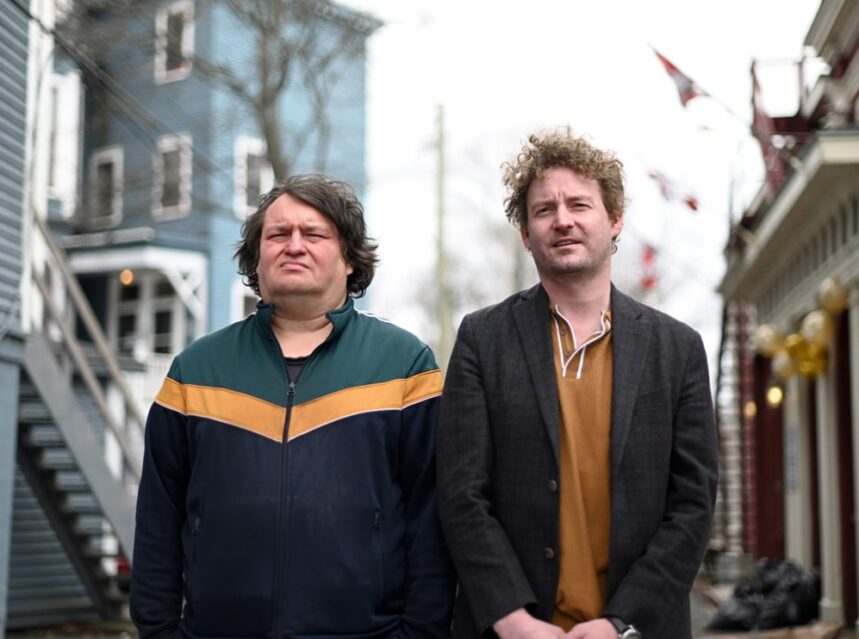 Toronto, ON – Canoe Productions Inc. and The Hunting Party are proud to announce The Canoe Project, a new short-form comedy series that is set to make its national debut in Canada on Fibe TV1on September 30, 2022. The series was created by comedian Mark Harnett alongside producer Gaelen Patrick Condon (Incredible Violence, Infanticide!), and stars both Harnett and Jimmy MacKinley (Trailer Park Boys, CBC Radio Laugh Out Loud).

The new six-part series follows Richard (played by MacKinley), a slimy Newfoundland government official as he blackmails Canoe (played by Harnett), an Inuit man from Labrador. Canoe is coerced to move to the big city so that Richard can document his indoctrination to the “modern world” and score himself a big promotion in the process. Watch a clip of the first episode here.

“The Canoe Project is an idea I had five years ago based on my experience growing up in a community of less than four hundred people and moving to St. John’s,” said series creator Mark Harnett. “It’s about the stereotypes I encountered during that process, but isn’t intended to belittle or degrade anyone. It’s intended to entertain and show that we can all have a laugh no matter what our heritage,” said Harnett.

The September 30 series release takes place on Canada’s National Day for Truth and Reconciliation. The day honours the lost children and survivors of residential schools and their families and communities, and is an important component in the ongoing reconciliation process. Through a comedic lense, The Canoe Project aims to shine a light on the Indigenous experience in Canada, and to create space for further discussion surrounding reconciliation. Additional information about the National Day for Truth and Reconciliation can be found here.

“With The Canoe Project, Mark Harnett has truly created an original and unique comedy series set in Newfoundland that reflects his immense talent,” said Paul Gardner, Senior Producer at Fibe TV1.“We’re happy to support Mark and his team to bring this Mockumentary to life!”

Canoe Productions Inc. focuses on the Indigenous experience and stories in the Atlantic region and Canada

Canoe Productions Inc. is a TV/Film company founded by Jimmy MacKinley, Mark Harnett and Gaelen Patrick Condon in 2021. It produces the Fibe TV1 series The Canoe Project. The company’s aim is to produce comedy-genre projects that serve as vehicles for Harnett and MacKinley, with special attention paid to the Indigenous experience and stories in the Atlantic region and Canada as a whole.

Born on the banks of the Mighty Miramichi River, Jimmy MacKinley has been a performer since 2006 after landing his first role in New Brunswick short film Mailbox Romance for which he took home the Best Actor Award at the Silverwave Film Festival. After being cast in a variety of roles in a number of shorts and feature films, he later discovered his next passion; Standup comedy. MacKinley performed a nationwide broadcast with CBC Radio One on their comedy show Laugh OutLoud and in 2019, he was cast in the latest season of Trailer Park Boys, produced in Halifax Nova Scotia.

Arriving in Newfoundland from Labrador 47 plus years ago, Mark Harnett is a late bloomer of comedy whose live show comes to life from his own personal experiences and opinions, culture and relationships. Accolades include performances at Yuk Yuk’s Comedy Clubs from St. John’s to Calgary, the Hubcap Comedy Festival and the Newfoundland Comedy Festival.

The Hunting Party is a production company is based in Newfoundland

The Hunting Party is a production company started by filmmaker Gaelen “Patrick” Condon, and based in Newfoundland since 2012. Their projects have been funded by Canada Council for the Arts, Telefilm, Bell Media and the Canadian Media Fund. Their short films have won awards at festivals such as FIN Festival, have been used as teaching aid in Newfoundland High schools, presented at Art Gallery’s and aired nationally on CBC. Their feature films have screened internationally at prestigious festivals such as Sitges Film Festival. Recently, they have licenced two television shows—a documentary about Petty Harbour and Indigenousu-focused comedy series The Canoe Project.

Fibe TV1 is your source for fresh 100% locally sourced television! TV1 is your source for local programming, made right in your backyard, by your community. Whether you’re a sports fan, foodie, DIYer or day tripper, TV1 has original freshly-made shows bursting with local colour and flavour. Only on Fibe TV, channel 1 and the Fibe TV app.

For more information on The Canoe Project visit wwwcanoeproject.ca.