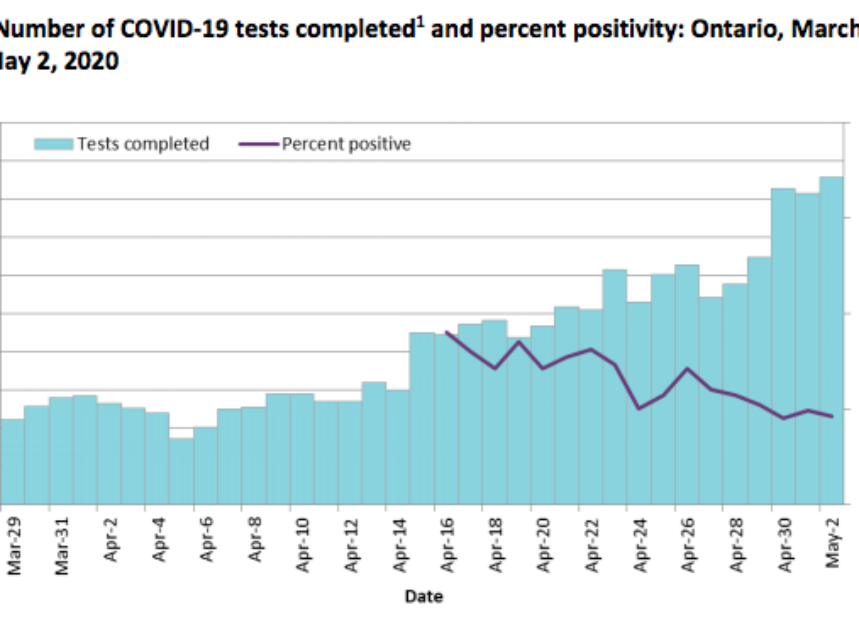 TORONTO, ON., May 5, 2020 — Today, Ontario public health officials reported just 370 new COVID-19 infections down from 434 yesterday, but sadly the province also reported 84 deaths which is close to a its record- high of 87. Ontario’s total case count including recoveries has now risen to 17,923 while the total number of Ontarians who have lost their lives to COVID-19 is now 1,300. There have been 12,505 recoveries.

Ontario’s Chief Medical Officer of Health Dr. David Williams said the encouraging thing is “the curve is gradually coming down with more and more testing and less and less positive daily test results.”

While Ontario’s Premier Ford offered a some encouragement saying, “If we keep going the way we’re going, we’ll be able to get out of this a lot sooner than we thought we would take a couple of months ago,” Ontario Premier Doug Ford said of Saturday’s numbers.

Sadly 626 of the province’s 1,300 deaths have occurred at long-term care centres, 36 more yesterday. Also 5 staff members have lost their lives due to the virus. The total number of active cases in the care homes is 2,564 along with 1,264 staff members. 212 outbreaks have been reported in long-term care homes.

Hospitals have also reported 251 staff cases of COVID-19 as well as 40 deaths. There now have been 64 outbreaks in Ontario hospitals, which is up 7 from Saturday.

Meanwhile as of 5:00 pm yesterday, Toronto Public Health says there are 6,278 people infected with COVID-19 in Toronto. This includes 5,641 confirmed cases and
637 probable ones. There were 387 people in hospital and 105 in intensive
care units. In total, we have lost 449 Torontonians to this virus.

Toronto’s Medical Officer of Health, Dr. Eileen de Villa said the data is showing positive progress within the city. She said “Prior to implementing strict public health measures in mid-March, each case of COVID-19 went on to infect an average of another 3.5 people. This contributed to the growth of the outbreak and the climb in our outbreak ‘curve.'” She said in the early stages in mid-March the number of new cases in Toronto was doubling every 4 days but that now, the number of cases are doubling every 7 days while the rate of infection has decreased from 3.5 to 1, meaning when a person becomes infected with the virus they are only transferring it to one other person.

Toronto’s top doctor also warned however that “while we believe our local curve is flattening, we are not yet seeing a steady decrease in the number of new cases or new hospitalizations each day.
This means we have likely not completely passed the infection peak. As is the case with any outbreak, we will only know when we have reached this point after it has occurred and our local cases begin to decrease.