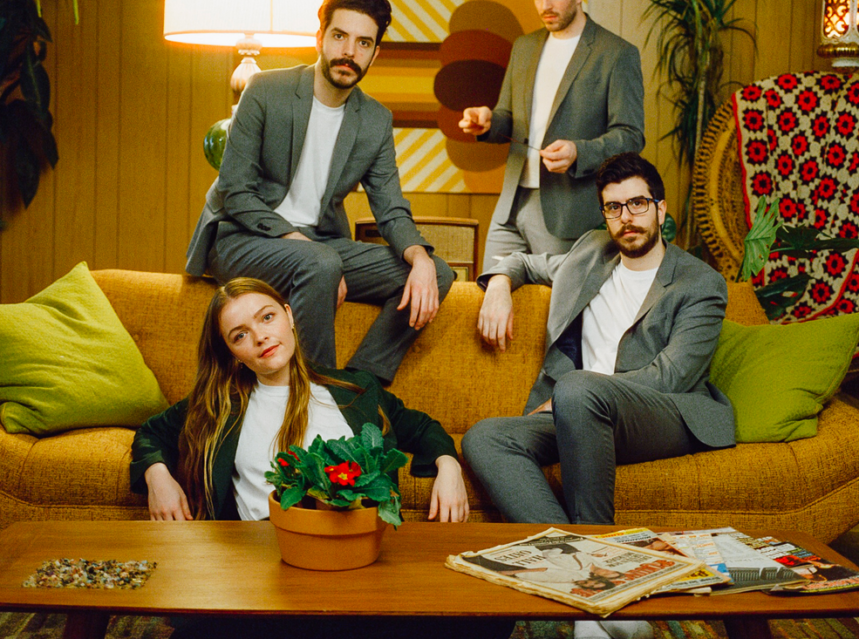 TORONTO, ON., June 25, 2020 — Hailing from Oshawa, Dizzy are today sharing their latest single, “Roman Candles,” alongside a new video ahead of their new album release on July 31.

Directed by Michael Pugacewicz (Parliament Pictures Co.), the video features vocalist Katie Munshaw’s unique choreography alongside some impressive pyrotechnics. The track will appear on the band’s forthcoming album, The Sun and Her Scorch, set for release on July 31 via Royal Mountain Records.

“‘Roman Candles’ is about how insecure I feel being someone who’s pursued music as a job. I’ve often felt jealous of friends who’ve taken more traditional paths in life. Some have gone to university and have 9-to-5 jobs already and have to buy funny things like lawnmowers and cutlery. I know that sounds silly, but I have a real fear I’ll never own a home or be able to support a family because of the decision I’ve made, so of course that’s scary. I think I’ve quit the band a dozen times since we started and then wind up taking it back an hour later because I know it’s just fear talking,” says frontwoman Katie Munshaw.

There are a lot of things to like about this band. Their mature sound has a lot going and it is also a beautiful listen. Fans of Toronto’s Jane Siberry, Kraftwerk, Coldplay and Feist as well.

Recorded at Quebec’s Mechanicland Studios and in Munshaw’s mother’s basement, The Sun and Her Scorch follows Dizzy’s 2018 Juno award-winning debut “Baby Teeth” and was produced by Dizzy and mixed by Craig Silvey (Arcade Fire, Florence + The Machine).

Describing their recording process as “totally challenging and completely rewarding,” the band took an entirely self-directed approach to every aspect of the album’s creation, introducing a more kinetic energy into their sound through their lavish use of live instrumentation. Tapping into their increased sense of closeness and confidence, the band brings its truth-telling to confessions of insecurity, resentment and fear of failure.

Of The Sun and Her Scorch, Munshaw says, “Baby Teeth was all about the confusion and sadness of my late teens, but this one is more about the qualities about myself that I’m not very proud of. I wanted to be completely honest about the things nobody ever wants to admit, like being jealous of your friends or pushing away the people who love you. So instead of being about romantic heartbreak, it’s really about self-heartbreak.”

Though they formed in 2015, Dizzy’s origins lie in the longtime friendship between Munshaw and the band’s drummer Charlie Spencer, who met in ninth-grade math class and later sang together in the school choir. Upon graduating high school, the two decided to sidestep the university path and start a band, enlisting Charlie’s siblings Mackenzie (bass) and Alex (guitar) and getting their start gigging in local bars. After playing one of their very first shows in Toronto, Dizzy landed a deal with Royal Mountain Records.

Baby Teeth was Dizzy’s coming of age story, set in the dense suburban sprawl of their hometown Oshawa, ON. Their influences and lyrics were both personal and universal in a way that could speak to anyone who has dealt with the anxieties of small-town ennui. The album won the Juno Award for “Alternative Album of the Year” in 2019 while the group found Baby Teeth included on the Polaris Music Prize 2019 Long List. The band has since toured with the likes of Death Cab for Cutie, Oh Wonder, Tokyo Police Club and U.S. Girls.

If you haven’t heard them yet, give them a listen and count on adding their music to your personal rotation as well as on indie radio. The Sun And Her Scorch is out on July 31st on Royal Mountain Records. It is available for pre-order here.