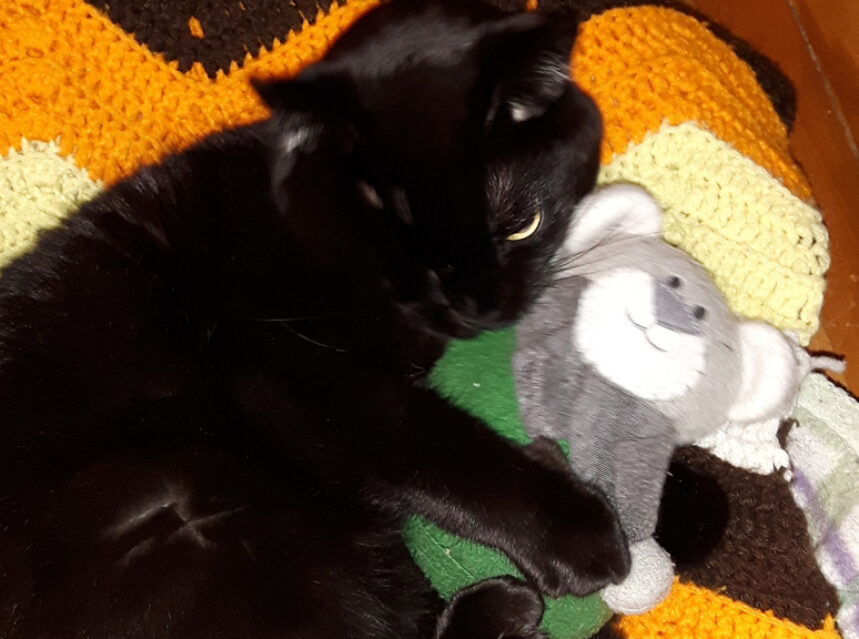 Casper is a 3 year old cat, rescued at only 5 weeks old by Holly Harris from a group of kids who were abusing him – and very lucky to be alive.
***A warning: This story might be very upsetting for some readers and animal lovers.

On a late, cold October night in 2013, Holly was in her apartment when disturbed by some noise coming from outside of the building, she looked out the window and saw a group of young kids (10 years+) swinging something around. 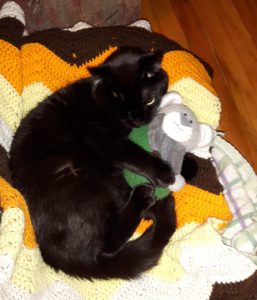 “I thought that was odd, so I tried to get a better look and then I noticed it was a very tiny kitten… and they were swinging it by its paws and tail!” she horrifyingly recalled.

The kids had then gone into the building and she heard screaming. She grabbed her coat, ran down three flights of stair and stopped dead in her tracks. At the bottom of the stairs was the tiny, black kitten.

“I got a better look at him and noticed he had his little eyes forcibly glued shut to his face… I was just so heartbroken over this.”

His fur was all matted up, he was terrified, dirty and shaking like a leaf but she managed to pick him up, wrap him in her coat and bring him to her apartment. He was so tiny, he fit in the palm of her hand. Beside herself with anger and concern, she called her sister who works in a veterinary clinic and was told to try and bathe him with warm water and do her best to take the glue off his eyes until she could bring him in the next day.

While she was giving him a warm bath she noticed with horror that one eye was severely injured. He was in pain and meowing, but still managing to purr a little. The next day at the clinic they were all shocked by what they saw and had little hope he would survive. His entire respiratory and immune systems were shutting down and his eye was horribly infected.

“I still didn’t want to give up. I told my sister to do whatever they can to make him better, I’ll find a way somehow to get them the money for the vet bills. I wanted to keep this little guy and give him the best life he could ever wish for… he was just a tiny baby and deserved to live a full happy and healthy life!”

After a hard struggle and one month in the hospital, Casper survived. He did lose his eye, but Holly was able to bring him back home. Today he is very healthy and loved by all who meet him – especially Holly who says ‘he is the biggest cuddle bug you could ever meet’!