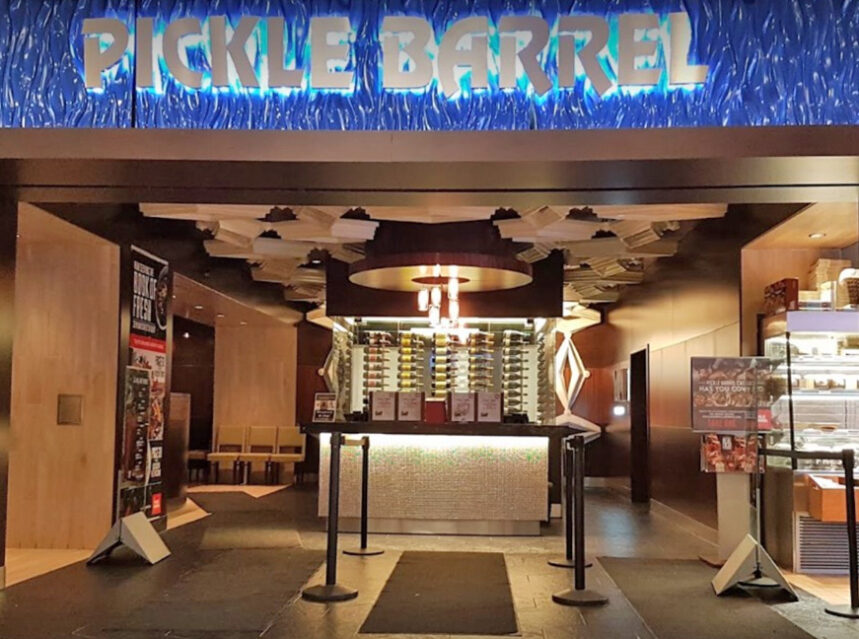 TORONTO, ON., Oct. 30, 2020 — Another restaurant has fallen victim to the imposed shutdowns as a result of COVID-19 restrictions, as Pickle Barrel’s only downtown Toronto location has permanently closed.

Open since 1981, the Atrium Yonge-Dundas location closed permanently on October 26, citing that they have been hit hard by the long shutdown imposed by the province. Pickle Barrel’s CEO, Peter Higley told CP24, today that their customer base consists of tourists, theatre goers, sports fans and sports tournaments and with all of those industries shut down they have suffered greatly.

In a statement posted to their door, the Pickle Barrel Atrium Team say, ” It is with heavy hearts to announce that our Pickle Barrel Atrium location will be closing our doors permanently. We have survived many economic downturns; this one however is the worst. This was the toughest decision we have ever made.”

Additionally, the downtown location doesn’t have a patio and is not allowed to serve indoors. Higley said that since March, many downtown offices have also been vacant, lending to much lighter traffic during lunches, and for after work meals and drinks.

On Twitter, a short notice November auction of the contents of the Yonge-Dundas Pickle Barrel was announced by Haymach Canada Inc.

In 2017 Cara Operations Limited purchased the Pickle Barrel Group of Restaurants, which was founded in 1971 and today it has 12 corporately-owned restaurants in highly sought after locations along with a thriving catering business, all across the Greater Toronto Area.

Pickle Barrel grew from a small deli concept into a beloved family destination, with a contemporary menu offering 300 items that are made fresh to order in each restaurant. Since 1971, Pickle Barrel’s catering business, with its fleet of refrigerated trucks, has catered over 1.2 million events, specializing in occasions that range from casual barbecues and picnics to elegant parties and fine dining affairs.

You can still order delivery from all Pickle Barrel’s dozen or so other locations, including Yonge and Eglinton, Yorkdale, and Sherway and many more around the GTHA.