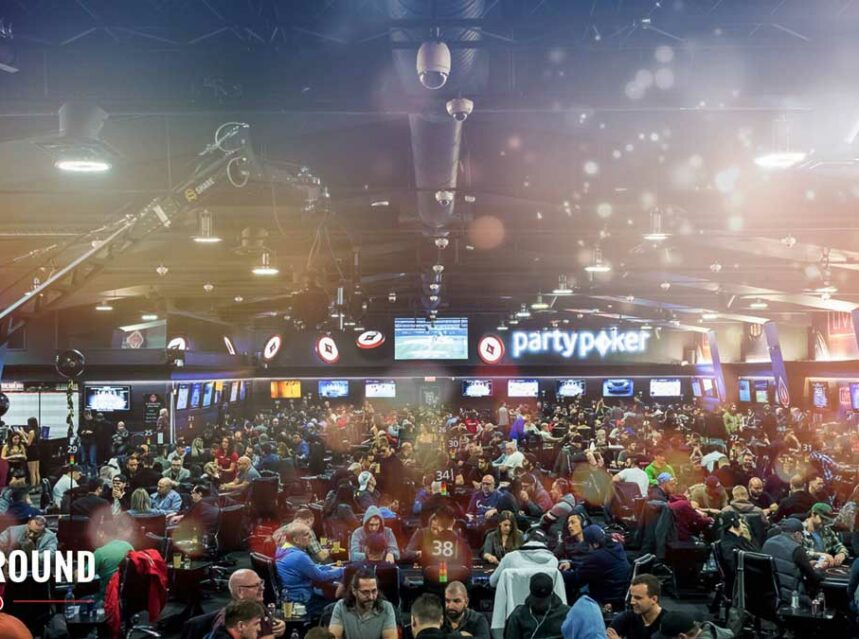 The hardest part about my first trip to Playground was finding a route to the Mercier bridge that wasn’t clogged with traffic. Unsuccessful though I was in that regard, everything after that was surprisingly smooth sailing. Once you make it over the bridge, the rest takes care of itself; potholes and orange cones are conspicuously absent on the short drive down route 138 and the road signs advertising millions in prize pool guarantees let you know that you are on the right path.

The neon sign out front is blindingly bright, however, it did let me know that I had found what I was looking for. The next thing that catches your eye is the new expansion rising high above anything in sight. I was so caught-up staring at the steel workers hoisting pieces into place that I cruised right passed the free valet and into the parking lot. I found a spot right away, a mundane event, but it came as the second surprise on this little trip for someone who rarely ventures off island.

Stepping in to the poker room and seeing the first dozen tables is like seeing the tip of an iceberg; there’s a lot more to it than what you can actually see. Staff of many kinds – cocktail waitresses, security guards, busboys and custodians – buzz around the room at a hurried pace while the dealers narrate the action. There are plenty more staff sitting behind computer monitors and shiny marble countertops. Words like “raise, all in” and “chips!” punctuate the rustling of poker chips and create an unpredictable soundtrack. Not knowing where to begin, I walk up to the first counter and ask for help.

Throughout the service economy, customers are called different things – clients, visitors, guests – but not here. Playground only has players, as the guest services agent explains while taking the photo for my membership player’s card. The player’s card functions as a Playground passport, I’m told. Whether it’s to register for a poker tournament and order a drink, play at a cash game table and order a meal or play an electronic gaming device and order more drinks, the player’s card is a necessity. “So the card just tracks your tab and you pay before leaving?” is my first question. The answer: “No, when you play, drinks are always free.” Surprise number three.

The player services agent, Jody, spits out lots of numbers as he leads me on a tour of the gaming floor, most of which go over my head; “at least two tournaments every day, over $130,000 given away every month in cash game promotions, over $1,000,000 in jackpots paid out in the last three months.” At least until we pass the cashier, the “cage” as he calls it, and get to the tournament hall, when I get a better perspective. This place is huge! The hall is the size of an airplane hangar and filled with poker tables. No wonder they’re able to run such big promotions and events. At the far end, the lights from electronic gaming devices twinkle and flash in the distance.

I quickly learn that there are 75 poker tables and over 350 electronic gaming devices spread across the 128,000 square foot space. Jody has not stopped talking about promotions and events, with some poker jargon mixed in, and I’m having trouble keeping track.

We finally get to the electronic gaming space, and the sounds of the machines become the new soundtrack to my tour, as Jody guides me along the periphery pointing out the seemingly endless banks of machines.

As we walk back through the tournament hall, Jody gives me a little Playground history lesson. It opened eight years ago as one small room with 20 poker tables. After a few successful years, they expanded and added the tournament hall to host major poker events. These events have only grown over time, giving Playground an international reputation in the poker world. In 2018, they broke ground on another expansion to create the electronic gaming space and eventually add a full-service hotel. I ask how many floors and rooms they’re going to have, but Jody either doesn’t know or won’t tell me, simply saying that all will be revealed in time. When we return to the counter where my tour started, there’s a line up of people waiting to sign up so Jody wishes me luck and darts behind the counter.

I take a few minutes to consider my options and eventually decide to buy in to the evening tournament. With some time to spare before it starts, I head over to the Rail restaurant and order something to eat from their daily menu. While waiting, I pull out my phone to try to find an answer to my only remaining question: Why didn’t my poker buddies tell me about this place sooner?