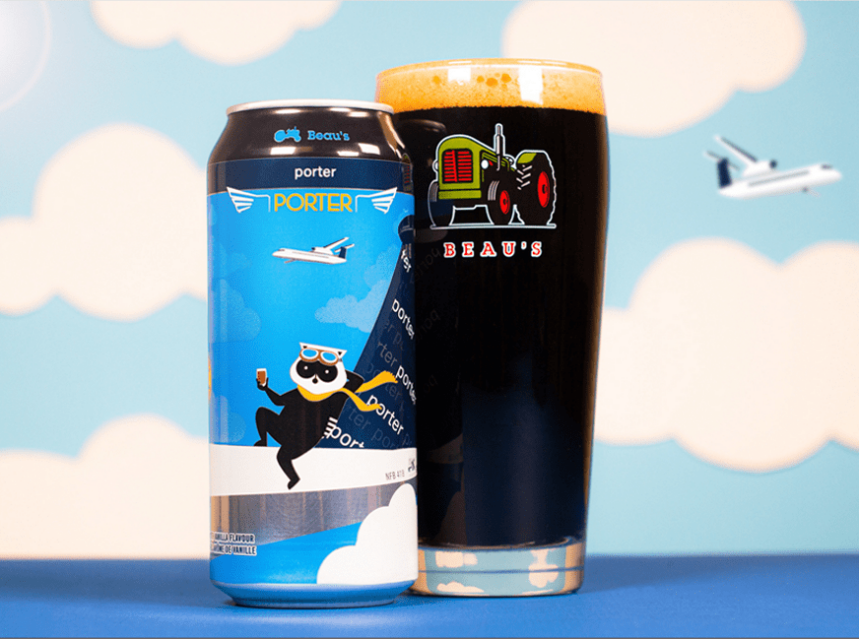 TORONTO, ON., Oct. 12, 2021 – Perfectly timed as the colder months begin, Porter Airlines and Beau’s Brewing Co. are launching a new co-branded porter-style beer, the Porter Porter. It is a dark beer with notes of espresso, chocolate and vanilla. A malty dark ale, it has a complex and flavourful character with a slightly dry finish.

The new product will be offered to all passengers as part of the complimentary onboard service, starting Oct. 12. The 473 ml tall cans will be available at select LCBO locations, The Beer Store and grocery outlets in Ontario, and grocery and dépanneurs in Quebec, later this month.

“This is a unique opportunity for Porter to introduce our brand to customers outside of airports and airplanes,” said Kevin Jackson, executive vice president and chief commercial officer, Porter Airlines. “We’re looking forward to adding the new beer to our complimentary onboard service, while also giving passengers the ability to enjoy a piece of the Porter experience right at home.”

Porter Porter cans feature artwork collaboratively designed by Beau’s and Porter. The airline’s graphic raccoon brand mascot, Mr. Porter, sits atop an aircraft wearing aviator goggles and a yellow scarf blowing in the wind. He is holding a glass of Porter Porter beer while another plane flies in the background.

As mentioned, Porter announced Beau’s as its exclusive beer partner in August. A rotating selection of Beau’s products, including the Porter Porter and its flagship Lug Tread lagered ale, will be offered to passengers. The complimentary service includes premium snacks, plus beer and wine served in real glassware for all passengers.

“We’re thrilled to work with such an amazing Canadian airline. Making the choice of what style to brew for this project was a no-brainer and such a perfect addition to our core line-up of brands,” said Steve Beauchesne, Beau’s Brewing Co. co-founder and CEO.

Where is Beau’s Brewing located?

Beau’s Brewing Co. began in 2006 as a family-and-friends-run craft brewery located in Vankleek Hill, Ontario. Since then, they have won over 100 awards for brewing, package design and business practices, including Favourite Local Brewery (Faces of Ottawa Awards, 2019), Best Brewery in Ontario (Golden Taps, 2018), and 4th-Best New Brewery in the World (RateBeer Best, 2017). Beau’s is Canada’s first Certified Benefit Corporation brewery, recognized for high standards of environmental and social stewardship, and their beer is brewed using 100 percent green electricity.