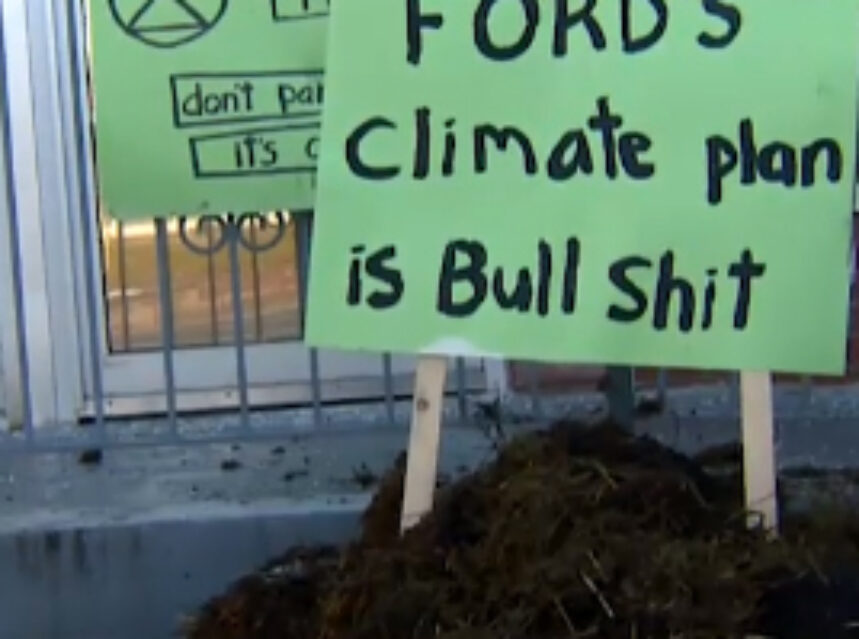 In their press release Extinction Rebellion state, “Extinction Rebellion (XR) has brought the climate emergency to the constituency office of Premier Doug Ford, in response to Ontario’s Auditor General effectively declaring that the Ford Conservatives’ climate action program is a load of crap.”

To make their point, XR members shovelled a truck load of organic cow manure onto the doorstep of Ford’s Etobicoke office this morning.

“The Ford Conservatives base their climate change strategy on lies and crackpot theories rather than scientific fact.” said XR member Cameron Topp.

Some of the specific complaints mentioned by the XR are that Joe Oliver, Ford’s appointed president for overseeing the energy grid denies the scientific facts about climate change, that Energy Minister Doug Rickford supports the Ontario government’s cancellation 750 renewable energy projects, and that Ford and the Conservatives just eliminated provincial funding for Hamilton’s Light Rapid Transit (LRT) system, crippling it and likely forcing cancellation after the City of Hamilton had invested $160 million over the last 10 years.

The Extinction Rebellion are already familiar to Torontonians, as earlier this year they blocked the Bloor Viaduct in Toronto for over five hours as part of a worldwide campaign for climate change awareness.

Premier Ford did not offer a response to the protest but his office released a statement saying, “We wish them a Merry Christmas, Happy Holidays and hope they have a more productive and joyous time with their families.”

Reaction on social media has been mixed as some are pointing out the hypocrisy of the delivery method because the truck driving all the way from Hamilton (along with all the petroleum based products required to build the truck) is polluting the environment, while others applaud the statement and they also applaud anything that raises awareness for climate change.