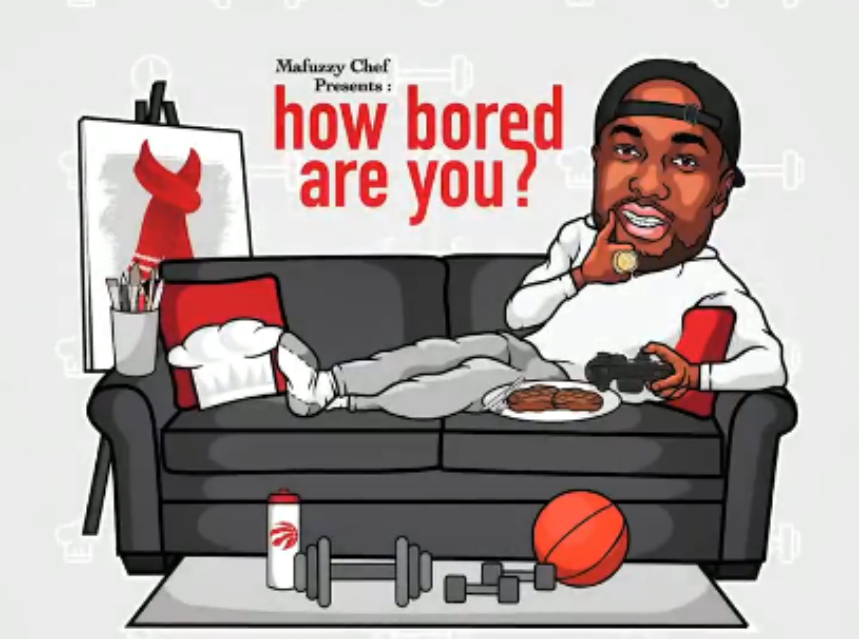 Colourful Toronto Raptors launched a new series on social media entitled How Bored Are You? a self-isolation themed follow-up to his YouTube series, How Hungry Are You?

In his most recent video the Raptors star demonstrated the “art” of how to wear the scarf. Ibaka and Dr. Eileen de Villa, Toronto’s Medical Officer of Public Health have quickly become Toronto’s two famous scarf wearers during the COVID-19 pandemic. Ibaka was already renowned for wearing his extravagant pre-game scarves but Dr. de Villa has surged lately, wearing different brightly coloured scarves at each COVID-19 press conference. It has become so apparent that the Toronto Medical Officer of Health is a worthy scarf-wearing challenger to Serge Ibaka that it has spawned an actual twitter account https://twitter.com/de_scarf.

But we are getting off-track here. Serge Ibaka has found a clever away to stay in touch with his fans and keep them entertained during this period of self-isolation.

Below is his most recent episode of ‘How bored are you?’ featuring a video chat with Terence Davis. Ibaka gives him a parental-like hard time for eating four doughnuts, telling him he will be big when the season starts back up and that he should keep walking. They both agree that they are overdue for a barber. It’s so much fun to follow along and a nice little escape for fans in isolation looking to get their fix of the Raptors.

The Raptors are supporting Ibaka’s efforts by compiling his videos into comprehensive episodes. Here is their full episode 8 produced by the Toronto Raptors, with Ibaka demonstrating his “art” although some might call it fashion.

Each episode runs about 2 to 5 minutes.

Ibaka also posted a video of himself running up and down his condo hallway as a cardio exercise, and this inspired fans to take things to the next level and send workouts of their own.

Here is a variation of Ibaka’s self-isolation exercise inspired by Ibaka.

In episode 7 was called “Point Gawd” and “KLO” (or @KLow7) Kyle Lowry tells Serge he is talking to him more now than on the court and that for cardio “you can’t just run up and down your little ass hallway. You need to do like 40 of those.” “The only way this thing goes away is if we follow the rules,” said Lowry. They both agree they really miss basketball and Lowry gives Ibaka some tips for future episodes suggesting he should do some art. Ibaka says he wears his art.

To make things easier for readers and fans, here are the rest of the links to the Serge Ibaka ‘How Bored Are you?” episodes. Follow his Twitter account to see them before the Raptors post them.

Episode 4, Remedies (to staying healthy) from the Motherland:

“What’s up guys?” it’s episode 3 featuring how Serge Ibaka does chores. “If I don’t do it, no one’s going to do it,” says Ibaka. Enjoy the Raptors play-by-play commentary.

“Hey guys” it’s the now famous and popular episode 2, the workout plan with over three thousand likes, featuring inventive way to work out in a small space.

And of course here is the video from when the series all started on March 14. This one received the most media coverage especially in the Toronto area. Ibaka takes fans into his condo and shows everyone his home gym set-up.

Stay tuned for more but you can follow along yourselves on the Toronto Raptors Twitter feed or right from the source before editing @sergeibaka.