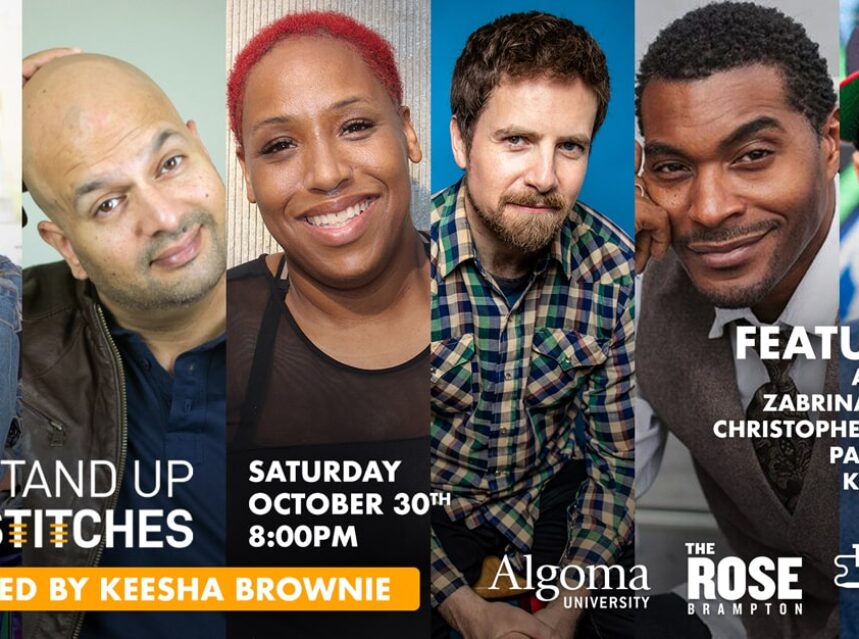 Brampton, ON., Oct 18 2021 – Stand-Up Stitches is delighted to be back for an incredible show at the Rose Brampton on Saturday, October 30, 2021 at 8:00PM. This live, in person comedy show will be hosted by Keesha Brownie, with stand-up performances by Ali Hassan, Zabrina Douglas, Christophe Davidson and Patrick Haye.

In 2020 Stand-Up Stitches was broadcast as a virtual performance series, #LIVEFROMTHEROSE, that connected artists, audiences, and community from the comfort of their homes. And now, audiences are invited to take a seat at The Rose Brampton to enjoy a night of laughs with an incredible line up of stand up comedians.

Stand-Up Stitches was created by Montreal born, Brampton raised comedian Keesha Brownie in 2020 to highlight homegrown talent within the community and connect with other talent globally. Funny is Funny, whomever you are!

Thanks to partnership with The Rose Brampton and presenting sponsor for Stand-Up Stitches comedy show, Algoma University, downtown Brampton.

Keesha Brownie: Keesha Brownie, Jill of All trades brings a verbal arsenal of humour harmony and business hustle center stage. She is unquestionably one of the most sought-after Canadian Entertainers to watch. Originally born in Montreal and relocated at a young age to Brampton where she miraculously survived the boredom of suburban life. Brownie speaks candidly about her Jamaican roots and Canadian Upbringing in her fun and infectious style of comedy. Her likable approach has been enjoyed in clubs, colleges, festivals, and theatres worldwide.

Christophe Davidson: He’s performed numerous times at both the Just For Laughs festival in Montréal & JFL42 in Toronto, can be heard on Sirius XM, CBC Radio One’s ‘Laugh Out Loud’ and seen on CBC Television, having recorded multiple televised Galas for the Winnipeg Comedy Festival and most recently his Anthony Anderson Gala at Just for Laughs.

Zabrina Douglas: Zabrina’s comedy has been featured on The Comedy Network, CBC and Teletoon. After Zabrina was nominated for The Tim Sims Award in 2008 she has been a part of major festivals such as JFL42, SLO comedy fest, Women In Comedy Boston fest, the Toronto fringe fest and the Soulo theatre festival. She has been travelling between Canada and the U.S. performing Comedy at various Clubs and private shows sharing the stage with major names in comedy such as Gilbert Godfrey, Cocoa Brown and Kenny Robinson.

Ali Hassan: Ali Hassan is a stand-up comic and actor who has performed for audiences across Canada and internationally. He is the host of CBC Radio’s LAUGH OUT LOUD and a five-time host of Canada Reads. He is also a frequent guest-host of CBC Radio’s Q and AS IT HAPPENS. A Canadian Award nominee, Ali has performed at the Just For Laughs Festival in Montreal, Toronto’s JFL42 and the Winnipeg Comedy Festival, in a set that aired on CBC TV. He has toured his solo show Muslin Interrupted around Canada to great acclaim, and in fall 2019, he starred in Just For Laughs Comedy Night in Canada tour, hosted By Rick Mercer. Ali has appeared in award-winning films and television roles. In 2020 he was seen in the films My Spa, Mafia Inc. and Tammy’s Always Dying, which had its world premiere at TIFF 2019.

Patrick Haye: Patrick Haye has grown to be a favourite wherever he plays. He has been featured on the Panel on CBC’s, George Stroumboulopoulus Tonight and has opened for Gerry Dee (Mr.D), Brian Callen (Mad TV, The Hangover), Eddie Griffin (Undercover Brother), and Harland Williams (Dumb and Dumber, Half Baked). His hilarious observations, storytelling, and musical keyboard comedy pieces has Patrick busy performing at clubs, colleges, universities, and corporate events all over the country.