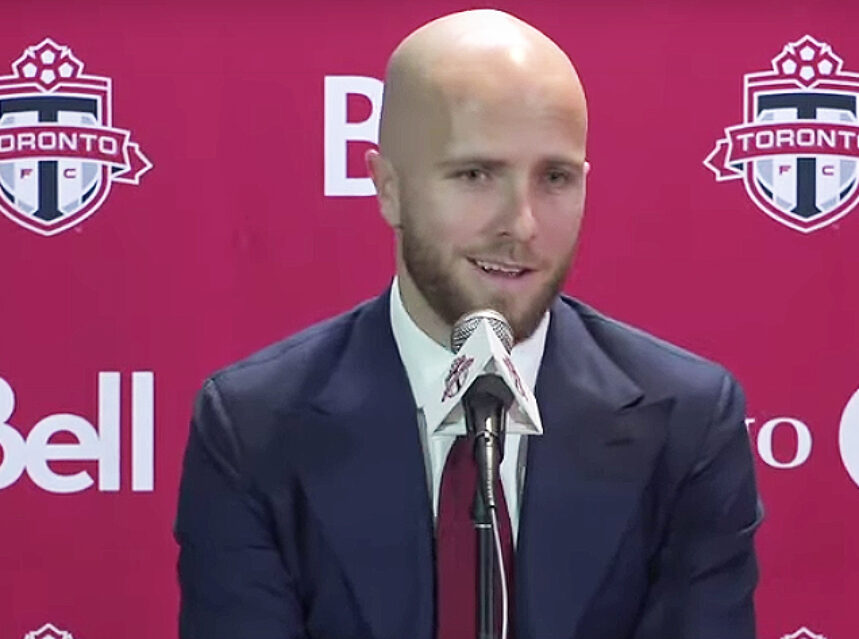 “I feel so attached to the city of Toronto, the club, the team. I love it here…” – Michael Bradley, captain, Toronto FC

TORONTO, December 12, 2019 – Toronto FC have officially announced that they have re-signed their American captain Michael Bradley on a new cap-friendly TAM contract which will have him playing for the reds for another three seasons.

The three-year deal to stay in Toronto will be significantly less than Bradley’s previous Designated Player contract which saw him earn $6.5 million last season. TAM of Targeted Allocation Money (TAM) are funds provided by the league to allow clubs to use a portion or all of their available TAM to convert a Designated Player to a non-Designated Player by buying down his salary to at or below the DP threshold.

In this case, it means Bradley, 32 a strong defensive midfielder, will receive about $1.5 million per season for the next three years.

“Michael Bradley has led this club in the biggest games we’ve played in during his time at Toronto FC and is our engine,” said Toronto FC President, Bill Manning on TorontoFC.ca.

“Michael and his family have made Toronto their home and we are all very happy that they will continue to be part of our club for years to come,” states Manning.

About re-signing with Toronto FC, captain Michael Bradley says, “I feel so attached to the city of Toronto, the club, the team. I love it here and I am really proud of what we’ve been able to do over the past six years.”

“Beyond the success, I am equally as proud of the mentality and identity this club has taken on. The relationship between the club and the city, the club and the fans are both very special and I’m proud to have played a part in that. What we have in Toronto doesn’t exist everywhere.

“Given the experiences I have had over the last six years, playing here, winning here, it means more. It’s pretty simple. The highs are higher and the lows are lower…in the end this is the only place I wanted to be.”

“My family and I are so happy to remain in Toronto and we’d like to thank everyone at Toronto FC for ensuring that this process was done quietly and professionally behind the scenes. I’m looking forward to continuing to play in the biggest games and competing for trophies every year,” says a smiling Bradley.

When asked about the details of the contract, Bradley said in the TFC press conference, “I will be here for sure for three years….my best years are still in front of me.”

And when asked why he wanted to spend the rest of his career in Toronto, Bradley responded, “It’s the club, the quality of people at the club…there are so many good people. We enjoy the surroundings we enjoy each other.”

Bradley went on to say, “honestly when you look at Toronto as a whole, what a sports city. I mean the way that the city supports its teams, supports its players there is such a pride.

“When you look at Toronto in a bigger sense, on a personal level it reminds our family of a lot different places that we have lived in obviously being from New Jersey just outside New York City and Chicago being set on the lake and the size of the city. There is diversity and there is a European influence and the nine years we spent in Europe, that certainly makes us feel at home.”

“When you look at Toronto, when you look at Canada, the diversity the tolerance, how progressive the city and the country are. When you talk about a place to raise a family, we are proud to live here and call this city home,” said Bradley.

Bradley, has played more than 200 matches for Toronto FC including three MLS Cup Finals, and has been the team’s captain since arriving from AS Roma in 2004. He has also represented the United States 45 times including eight World Cup appearances.

Interestingly, MLS TAM rules state that if TAM is used to free up a Designated Player slot, the club must simultaneously sign a new Designated Player at an investment equal to or greater than the player he is replacing as a DP. So expect a new signing to be announced by Toronto FC very soon.