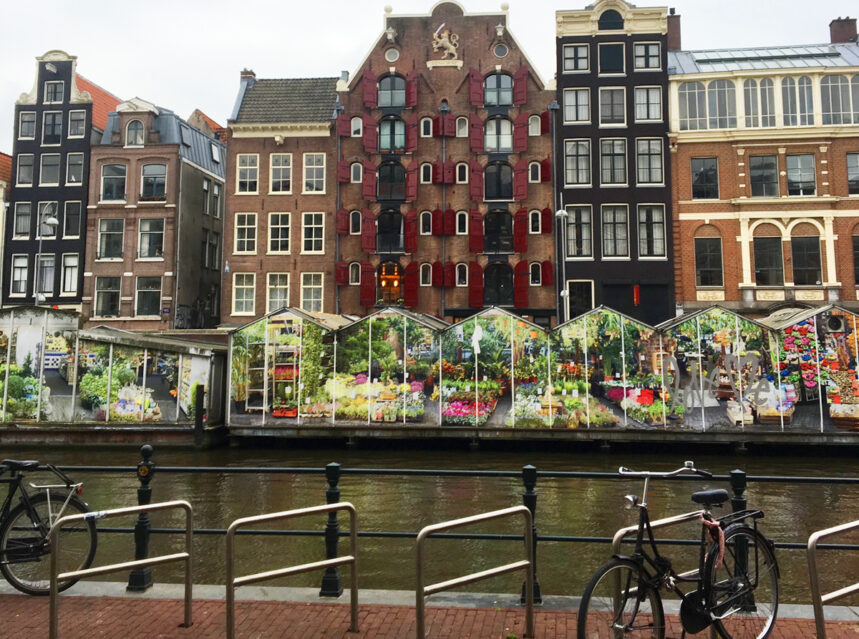 What to see and do during your layover in Amsterdam

Amsterdam is a popular layover destination partly because flights there tend to be a little less expensive in comparison to the rest of Europe aside from Iceland and Ireland. Also, the city is well situated for taking the Euro rail to several central destinations. The city makes a perfect layover destination and may cater to visitors so well during their layovers, that they may choose to make their next visit will be a stay-over.

There are 165 canals stretching more than 100 kilometres through the city of Amsterdam, along with well over 1,500 beautiful bridges. The canal system has been developed over the centuries and their main purpose originally was to stimulate trade, transport and expand the city.

Because of the canal system, Amsterdam is often referred to as the “Venice of the North.” Seeing the city and its historic buildings and neighbourhoods from the deck of a canal cruise boat gently floating along the canal systems and beneath its bridges, is a must-do for visitors and locals alike. Amsterdam’s canals are so valued and important that have also been recognised as a UNESCO World Heritage Site.

Other types of canal cruises are also available which include the hop-on-hop-off cruises, romantic candle-lit tours, child-friendly adventures and guided boat tours. To purchase tickets for a canal cruise visit: www.canal-cruise-amsterdam.com

Windmills are an iconic part of the Dutch landscape. The Netherlands once had more than 10,000 windmills in operation but now only about 1,000 still remain. Windmills were a way to pump water or run production mills of every kind. The windmills (molens) are so important to the Dutch that they celebrate a National Windmill Day (May 11).

Amsterdam has 8 Windmills located within the city.

The van Sloten windmill is the only working windmill in Amsterdam and it is open to visitors from 10am to 4 pm. It is still used to pump water from the surrounding area.

Another cool windmill to check out is the De Gooyer, located just east of the city centre. It has been repurposed as Brouwerij ‘t IJ brewery and 8 standard beers as well as three seasonal beers. De Gooyer windmill is also the closest windmill to downtown. For a list of the windmills in Amsterdam, visit: www.amsterdam.info/windmills/.

Amsterdam is known as the most bicycle friendly city in the world. So why not explore the city as the Dutch do and blend in with the locals? The streets are mostly flat, bike paths are clearly marked and they all lead somewhere; whether it is an intriguing neighbourhood, parks, historical sites, attractions or scenic routes. The city is there to be explored by bike, in fact the city of Amsterdam has more bicycles than residents!

Interestingly, in the Netherlands cyclists always have the right of way, including on the roads. There are many rental facilities around the city and if you are unsure about keeping pace with the local cyclists, it may be a good idea to rent a brightly coloured bike so that other cyclists know you aren’t a local and they will be more tolerant should you make any mistakes.

The Dutch word for clogs is Klompem (Klom-pem) and they are an important part of Dutch heritage. Still worn in rural parts of the country, farmers began carving their shoes out of wood because it was a cheap, affordable method and the footwear was perfect for working on the land. Clogs have been certified by the European Union as safety shoes because of their one-piece wood construction. Traditionally clogs were carved by skilled artisans but today they’re mostly machine made.

Clog making was once a booming business with almost 4,000 wooden shoe factories, but by the mid-’70’s only 150 factories remained and today even less. Although clogs are sold in souvenir shops, visiting an authentic shop and have a pair of clogs hand-made and decorated specifically for you is a real treat. The Wooden Shoe Factory, holds clog making demos and will make a custom pair. www.woodenshoefactory.com.

Amsterdam is renowned for its colourful and lively markets. There are 12 daily outdoor markets, another 15 markets that are open one or two days a week (usually on weekends), and several others that are only open seasonally and weather permitting. Most of the markets are situated in the centre of Amsterdam and sell everything including: houseware, specialty products, cheeses, breads, baked goods, food, meats, seafood, produce, souvenirs, flowers, bicycle accessories, sunglasses, shoes, and the fresh stroopwafels (Syrup Waffle). This is a local delicacy and it is simply two thin layers of baked dough with caramel syrup filling in the middle…Oh so delicious!

Some of the more popular markets are the floating Flower Market- Bloemenmarkt, located on the Singel canal and the Farmer’s Market- Boerenmarkt, located within the Noordermarkt (Northern Market).

Amsterdam caters to people enjoying a layover, in fact you will like it so much that your next trip will be a stay-over.

Frank Greco is a world traveller and television producer of “The Travel Guy, Gourmet Escapes and The Mangia Cake Boys.” Follow Frank on Twitter (www.twitter.com/iamthetravelguy) or become friends on Facebook (www.facebook.com/frank.greco.338).