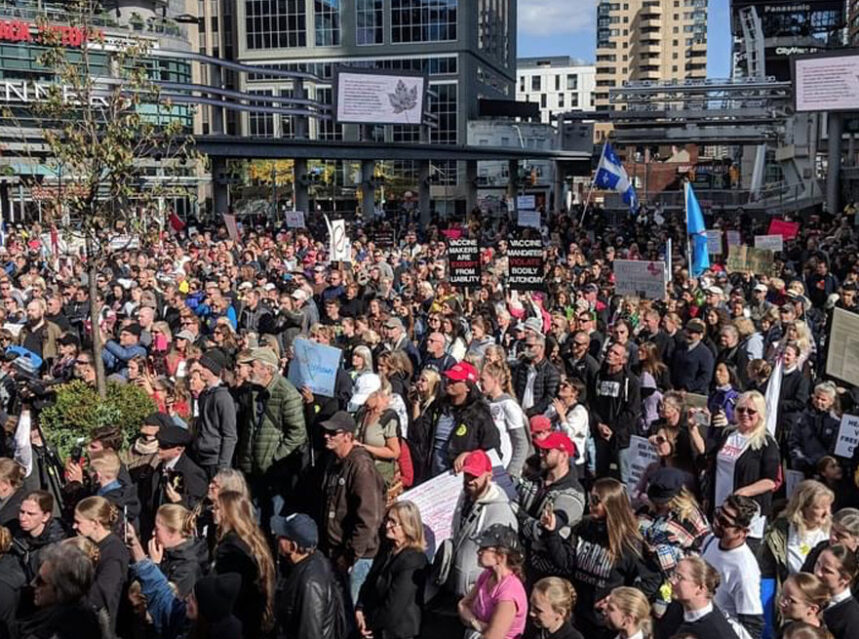 TORONTO, ON., Oct. 21, 2020 — The March for Freedom & Motorcade organized by The Line Canada, a pro-citizen movement, took place in Toronto on Saturday, Oct. 17th to protest what it views as governmental overreach in COVID-19.

Thousands who came from all over the country gathered at Yonge-Dundas Square to rally against rotating lockdowns, mask mandates, hefty fines, and censorship.

The peaceful protest was live-streamed and followed by a motorcade through Toronto’s downtown core.

Speakers included constitutional lawyer Rocco Galati who is representing Vaccine Choice Canada and several other plaintiffs in a lawsuit against the Canadian Government, the Ontario Government, the City of Toronto, and public health officials.

The suit claims that restrictions in COVID-19 have been excessive and unwarranted and that the health system has failed to provide essential healthcare.

Organizers promised that the event would be ”loud and proud” and it lived up to its billing with impassioned speeches, shout-outs, applause, and cheering while a Pantomime artist wearing a theatrical mask and rubber gloves performed for the crowd on a side stage. The rally ended on an upbeat note with people singing Canada’s national anthem, ”O Canada.”

Other speakers included: Amanda Forbes & Christine Colebeck of the Children’s Health Defence Canada, announcing the organization and a new lawsuit; Cheryl Yakem of Vaccine Choice Canada, Dr. Marissa Heisel-DC, and health coach Jason Christoff; Stephane Blais of FDDLP.org, a Quebec-based civil rights organization that spearheaded two huge protests in Montreal, and Maxime Ouimet, a Laval police officer who resigned when Quebec brought in telewarrants giving police the power to enter and search people’s homes while investigating complaints of house parties; Pastor Henry Hildebrandt of The Church of God from Aylmer, Ontario; Ontario educator Mike Jay; Cullen MacDonald and Dan Oke from Hugs Over Masks – Hugs Nation, a group opposed to mandatory masks; The Line Youth League & Project Phoenix; Chris Sky of Mother’s Against Distancing, Private on Demand, United Against Non-Compliance; Denis Rancourt, Joseph Hickey, and Carly Benjamin of the Ontario Civil Liberties Association; retired federal civil servant Paula Tucci of Stand Up Canada; and American author and superfood & raw food advocate David Avocado Wolfe. A rabbi made an impromptu appearance on stage to bless participants and warned them that Canada is in danger of repeating the mistakes of Nazi Germany unless it changes its present course.

Chris Sky thanked the Toronto Police for helping the event to run smoothly, but the mood appears to have changed since then. Last week, the Ford government reduced the maximum size of allowable social gatherings to 10 people indoors and 25 outdoors while simultaneously introducing steep fines of up to $10,000 for anyone found to be hosting an illegal gathering and $750 for anyone attending one.

At a briefing on Monday afternoon, Interim Police Chief James Ramer said that the Toronto Police will now be assigned a dedicated team of officers to hand out fines in coordination with municipal bylaw officers and Toronto Public Health staff. The purpose of the change, he said, is to provide a more “consistent approach” that prioritizes enforcement in light of the new stricter rules and penalties.

“The focus now will be more on enforcement rather than on education and cautionin,.” said Ramer.

The previous limits of 50 people indoors and 100 outdoors permitted under Stage 3 of the province’s reopening made cracking down on large public gatherings difficult. How effective this new get-touch approach will be, remains to be seen.

Despite warnings about spreading coronavirus, last spring was marked by large-scale protests by Black Lives Matter, and by the summer anti-mask protests had really begun to pick up steam.