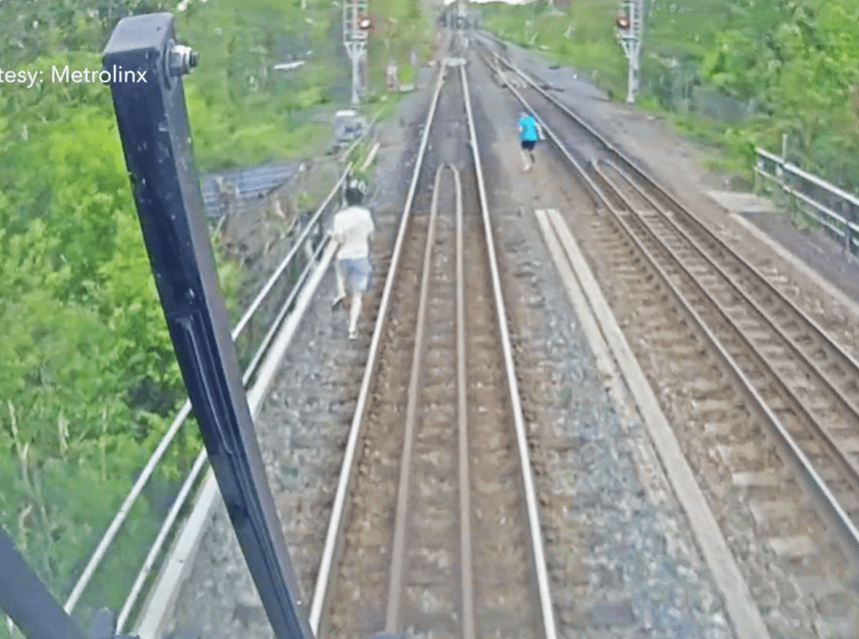 TORONTO, May 28, 2022 – Metrolinx has released what they call a ‘silent witness’ video from the front of a GO Train in an appeal to the parents of the three young people who risked their lives Friday, on the Humber River rail bridge near Dundas St. W. Metrolinx officials say they also want to draw attention to anyone working with young people to help the agency reinforce the dangers of walking on train tracks.

The video is chilling and can be upsetting to watch – miraculously, the young people were not seriously harmed but likely traumatized after a close call with a GO Train.

On May 20, 2022, a crew operating a Milton Line GO Train approached the Humber River overpass in Etobicoke, near Dundas Street West. As they travelled across the overpass, the crew spotted a young person clinging to the fence on the edge of the bridge and only narrowly missed him.

Shortly after, they also saw two more young people up ahead running on the track as if they were trying to outrun the train.

Knowing just how dangerous their actions were, the crew had to act fast if there was any way to prevent hitting them.

Here is the “Near miss” video from May 20, 2022 – some people may find the content disturbing. (Metrolinx video)

Incidents like this are too often tragic and life-altering – not only for loved ones but for the crew and first responders involved. The train crew slammed on their emergency brakes and blasted their horn.

As the train was still stopping, it narrowly missed one of the young people by a foot, avoiding a tragedy.

The young people ultimately took off as the crew began the recovery to get the train moving again.

According to Operation Lifesaver, more than 100 Canadians are seriously injured or killed every year as the result of railway crossing or trespassing incidents. Officials say almost every one of these incidents is preventable.

Metrolinx has issued an appeal to the parents. “If you recognize these young people, please get in touch with us,” said Steve Weir, Metrolinx manager of customer protective services.

“We aren’t looking to be punitive, but we are very eager to speak with your children to help educate them and ensure they never ever take this kind of risk again.”

Weir is also hoping that all parents and caregivers watch the video – as chilling as it is – and use the opportunity to speak to their children about the dangers of walking or playing on and around train tracks.

Read more about track safety in Metrolinx News and here.