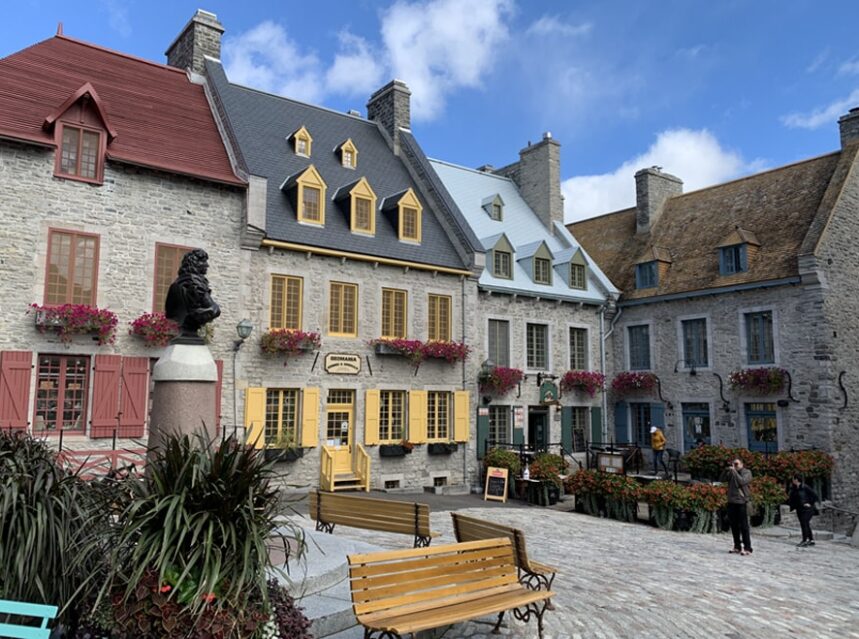 Quebec City: A Slice of Europe Close to Home

While we may not be able to travel to Europe right now, you can enjoy a little slice of Europe by visiting Quebec City. Cobblestone streets, beautiful historic stone buildings, quaint shops, sidewalk cafés—even a fairytale castle hotel (Château Frontenac) – this is Quebec City.

The Historic District of Old Quebec was declared as a UNESCO world heritage site in 1985. Quebec City is the only fortified city north of Mexico. It’s also the birthplace of French Canada. Famous for its European architecture and fortifications, Old Quebec offers a slice of Europe without the cost of a plane ticket.

Plan on spending at least two to three days, or longer, in this magical city. On a recent trip, I discovered some of the top things to do and see in a few days.

Ride the Double Decker Bus for a Bird’s Eye View of Old Quebec, Plains of Abraham and More

Easy to find, the Quebec Tours double decker tour buses are parked along the street adjacent to the Chateau Frontenac hotel. The upper deck allows passengers an unobstructed view of all the major sights in the city covered on the one-hour bus tour. The friendly tour host offers narrative in both French and English as he points out major sites in the upper town and lower town (Old Quebec). Old Quebec offers the perfect vantage point to take photos of the cobble stone streets and stone buildings with a view of the famous Chateau Frontenac sitting high on the hill as a backdrop. Other sites pointed out along the route include The Plains of Abraham, the fortifications and city gates, the Citadelle, the Quebec Parliament buildings and the famous Tourny Fountain.

The fountain by French sculptor Mathurin Moreau was a gift made to the City of Quebec in 2007 by La Maison Simons, the family who owns Simon’s retail store, to mark the 400th anniversary of Quebec City. https://www.toursvieuxquebec.com/en/page/city-and-country-tours

Stroll the boardwalk in Front of the Chateau Frontenac Hotel

“What do Celine Dion, Sir Winston Churchill, Grace Kelly, U.S. President Franklin D. Roosevelt and Alfred Hitchcock have in common?” is a question asked on the Fairmont Le Château Frontenac website. Answer: They were all guests at the illustrious Fairmont Le Château Frontenac. The fairy-tale castle looms over Quebec City and is considered one of the world’s most photographed hotels. Over the course of its 125 plus year history many famous people have been guests at “the Chateau”. Built in the late 1800’s, this is an excellent example of the grand hotels developed by railway companies in Canada to attract tourists. Officially opened in 1893, the hotel was designated as a National Historic Site in 1981. Often referred to as the Castle in the Clouds, this chateau was inspired by chateaus in the Loire Valley. France. The hotel is perched high atop Cap Diamant overlooking Old Quebec and the St. Lawrence River. Today you can stroll the boardwalk in front of the Chateau and enjoy the bird’s eye view of the river and city below.

Ride the funicular behind the Chateau Frontenac to Old Quebec for just $3.50 for a one-way fare (or take the steps if you want a challenge). At the base of the funicular awaits Petit-Champlain, one of the oldest and most photographed streets in Canada. The rustic cobblestone streets are lined with stone buildings boasting great restaurants and shops. Tourists and locals alike delight at the quirky flying bunnies and rustic décor outside The Lapin Sauté. The beautiful stone restaurant is known for their delicious French (Quebecois) cuisine. Just down the street artisans are busy creating hand painted silk scarves at Soierie Huo. Artisans Dominique Huot, Marie-Christine Huot and Hugues Beaulieu will demonstrate hand painting on silk in their shop that is a kaleidoscope of gorgeous silk scarves and more. https://www.quebec-cite.com/en/old-quebec-city

Situated on Rue du Cul-de-Sac, the street has earned the name Umbrella Alley thanks to the dozens of colourful blue and white umbrellas hanging over the street creating dappled shade to the cafes and street below. Look up and on a perfect day you’ll see hints of fluffy white clouds between the umbrellas while later the umbrella shapes are seen in the shadows on the pavement. We enjoyed the streetscape while sampling delicious French Onion Soup at Q-De-Sac Resto-Pub located right by the umbrellas. https://www.quebec-cite.com/en/quebec-city/cutest-streets

Wine and Dine on the “Party Street” of Grande Allée

As far as the eye can see, gorgeous sidewalk cafes, restaurants and bars nestle along the tree-lined street called Grande Allée. This is where Quebec’s nightlife happens. You can feel the city come to life as locals and tourists alike wait in line to dine at the many renowned restaurants or stop in for a nightcap at a local bar, nightclub, or microbrewery. Yes, they fill the sidewalk cafes, but a word of warning: be prepared to wait in line for a seat, but it’s well worth the wait. We enjoyed a fabulous dinner of Flank Steak at Restaurant Louis-Herbert, served on the patio where guests can enjoy people watching along with fine dining. The street is located just a few blocks from the Plains of Abraham and the Parliament Buildings and even enters Old Quebec through the Saint-Louis Gate. Take the time to stroll down the street to admire the Victorian architecture of homes built in the latter part of the 19th century. https://www.quebec-cite.com/en/what-to-do-quebec-city/grande-allee

Most city streets are illuminated at night, but this is a bit different. As part of an outdoor art gallery project by lighting-design firm Lightemotion, dozens of enormous eight-by-five-foot lampshades hang above Cartier Avenue. Each shade is printed with artwork by Alfred Pellan and Fernand Leduc from the permanent collection of the Museé National des Beaux-Arts du Québec. Lightemotion.ca

Visit the Quebec Aquarium to see More Than 10,000 Specimens Representing 300 Species of Mammals

Exotic fish, amphibians, reptiles—you will see them all at the Quebec Aquarium. The kids will delight as they watch marine mammals like polar bears, walruses and seals frolic and play in their outdoor home. Pavillon des Profondeurs is a popular exhibit where you can watch jellyfish, string rays and sea horses in action. https://www.quebec-cite.com/en/businesses/aquarium-du-quebec

Take a River Cruise on the St. Lawrence for a View Like None Other

Admire a view of Old Quebec and the Chateau Frontenac from the vantage point of the St. Lawrence River. AML Croisieres operates various river cruises including the Dinner Cruise which includes a 3-Course Table D’hôte Dinner aboard the Louis Jolliet. Cruises even take you close to Montmorency Falls for a stunning view. Watch the sunset over the river and the city for an evening you won’t forget. https://www.croisieresaml.com/en/plan-your-cruise/quebec/tout/

Just a 20-minute drive from Old Quebec Parc de la Chute-Montmorency is home to Montmorency Falls. The 83-metre-high waterfall is actually30 metres higher than Niagara Falls! Walk the panoramic circuit where you will discover various lookout points and a series of platforms on various levels to observe the falls plunging into the St. Lawrence River. For those who dare, walk the suspension bridge where you will feel the waterfall roaring beneath your feet! There’s also a gondola which offers a panoramic view of the falls. https://www.quebec-cite.com/en/businesses/parc-de-la-chute-montmorency

The two pillars filled with crutches left behind by people who have been healed is evidence enough that miracles can and do happen at the famous shrine. Located just 20 minutes from Quebec City, the shrine welcomes almost a million visitors annually. Saint Anne was the mother of Mary and is the patron saint of Quebec. She is known for healing. In 1658, a few acres were donated to build the church and during construction, miracles started happening and continue, according to the website which states: “There are many cases of people who have been healed after praying to Saint Anne.” The Shrine of Sainte-Anne-de-Beaupré is one of the oldest pilgrimage sites in North America. https://sanctuairesainteanne.org/en/saint-anne/favours-obtained