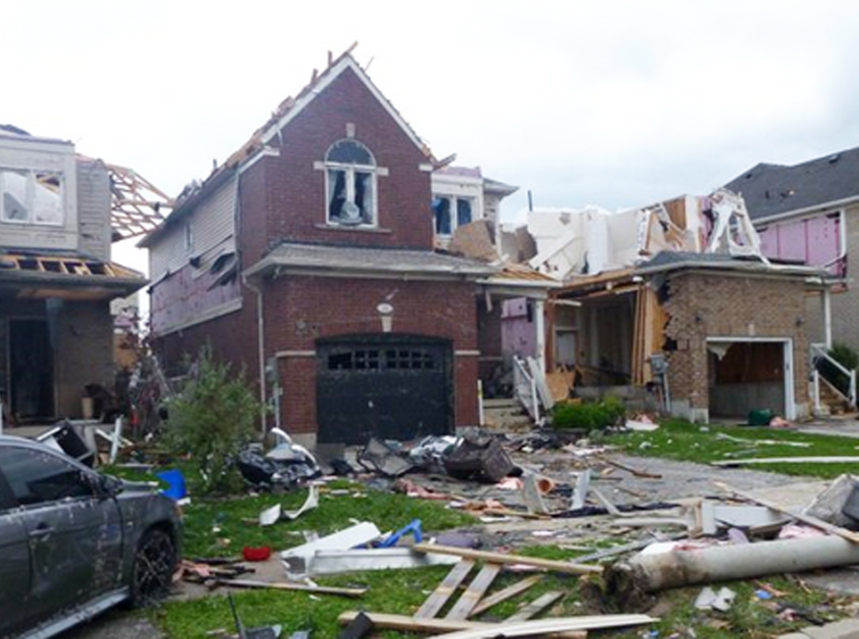 Environment Canada has confirmed that an incredibly powerful EF-2 tornado touched down in the southern Barrie area, injuring 11 people, with winds of up to 210 kilometres per hour on Thursday afternoon.

Just minutes before the tornado hit the Mapleview Drive/Prince William Way area at approximately 2:40 p.m., residents across central Ontario received a tornado warning on their phones and many scrambled to take cover. The warning to “take cover immediately” if threatening weather is spotted went out to residents in Angus, Barrie, Collingwood, Hillsdale, Innisfil, Lagoon City, New Tecumseth, Orillia, and Washago. Shortly afterwards, warnings went out to people in the Peterborough, Lindsay and Kawarthas region, where in fact a tornado touched down last June.

According to Environment Canada, the tornado first touched down at a miniature golf course on Huronia Road and Mapleview Drive and then continued eastward towards Prince William Way, leaving behind a 5 km long 100 m wide trail of catastrophic destruction, and close to 400 homes without power.

The most significant damage occured on the north side of Mapleview Drive. Environment Canada says trees were uprooted and toppled, at least ten roofs were removed, and the second floors were destroyed on two of these homes. There was also extensive damage to some vehicles of which two were overturned.

According to Barrie Fire Chief Cory Mainprize, about 20 to 25 structures suffered significant damage, making them uninhabitable, and three homes were completely decimated. Many residents describe the fallout as “like a warzone.”

In addition to extensive damage to several homes and vehicles, 11 people were taken to a local hospital with non-life-threatening injuries.

The City of Barrie has set up an an evacuation centre has been opened at Saint Gabriel the Archangel Catholic School and Ontario Premier Doug Ford is expected to visit the area today and inspect the damage.

Toronto Mayor John Tory also expressed his concerns and offered help to Barrie Mayor Jeff Lehman. “I reached out to Mayor Jeff Lehman last night who’s a very solid guy and they’re lucky to have somebody as solid as him there to sort of deal with the aftermath there and offered Toronto’s help. I said anything we could send up, anything we can do,” said Mayor Tory on CP24.

The Enhanced Fujita (EF) scale rates the intensity of tornadoes, with EF-5 being the highest level tornado with wind speeds of more than 315 kilometres per hour. In 1985, an EF-4 tornado ripped through Barrie killing 8 residents and destroyong 600 homes.

Ontario is know stranger to tornadoes and on average has about 11 tornado touch downs per year.

The Barrie Police Service set up a central phone line for anyone who needs assistance related to the tornado in Barrie, but thanks to the public outpouring of support said, “at this point, we are unable to accept any further donations. Updates will be provided if further donations are needed. Thank you to everyone who has provided donations.”

For more information, including the full list of streets affected, go to the Power Outage Map. You can also follow @alectranews on Twitter for updates during major power outages. To hear restoration details, call 1-833-ALECTRA (1-833-253-2872), press 1.