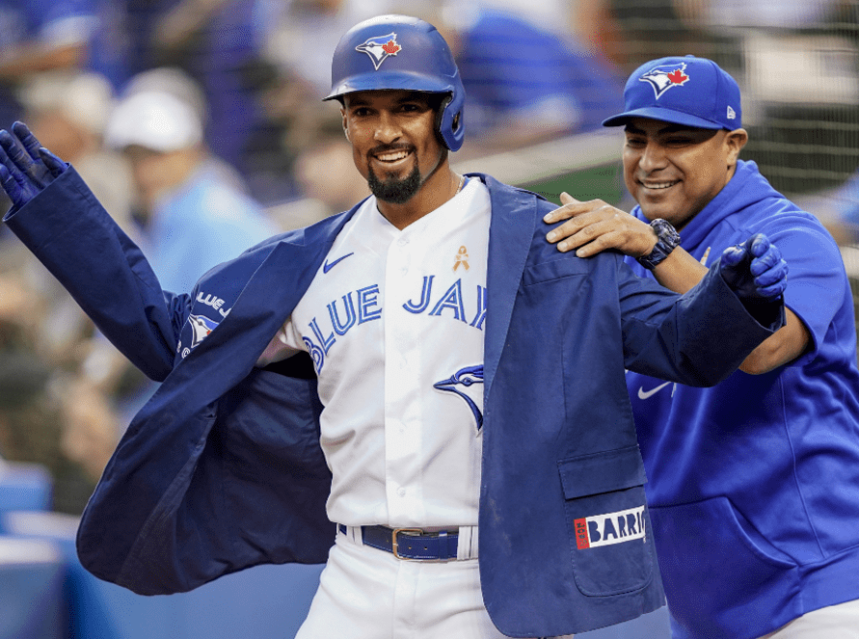 Marcus was born on September 17th 1990. He is an American baseball shortstop and second baseman with the Toronto Blue Jays Major League Baseball. Before coming to Toronto, Semien played for the Chicago White Sox and Oakland Athletics. The Blue Jays were among the many teams that have vied for Semien’s skills during the off-season. And looking towards next season, Marcus’ skills could certainly help the Blue Jays moving forward.

Marcus signed a one-year contract with Toronto Blue Jays on January 30 2021. And for the first time in his career, Semien was named an All-Star on July 1. He was also named as the starting second baseman for the American League in the 2021 All-Star Game. By September 29, Marcus had smashed his 44th home run of the 2021 season for the surging Toronto Blue Jays. Semien then went on to set a new MLB record for home runs in a season by a second baseman.

Disaster may strike hard this off-season when some of Jays’ players become free agents. Of particular concern is what would happen to Toronto without the leadership of legitimate MVP candidates Marcus Semien and Robbie Ray? How will this affect their odds at the best sports betting sites in Canada, and how are fans likely to take it? The Jays need to make solid management decisions as it is going to be difficult to sign them both. They Jays will also be looking to make long term deals with Jose Berrios, Toescar Hernadez, Vladmir Guerrero Jr. and Bo Bichette if Toronto wants to hold on to them long term and secure a bright future. Many fans have given a knee jerk reaction that favours re-signing Ray because of his pitching skills. The response makes sense but may not be that simple looking at it in the bigger picture.

Will the Jays convince Semien to stick around?

However, positive speculations are on the rise, and we hope that the Blue Jays will renew a contract with Marcus. Although the Yankees require a shortstop, they may also prefer to look at newer players such as Corey Seager, Carlos Correa and many more.

Marcus Semien grew up pitching and playing at El Cerrito Youth Baseball during his childhood and was a significant member of the area’s All-Star teams. Semien attended St. Mary’s College High School in Berkeley, California, where he managed to hit .471 as a junior player and .371 as a senior. The Chicago White Sox drafted Semien in the 34th round of the 2008 MLB draft. In addition, he was named to the All-League three times. However, Semien instead opted to enrol at the University of California, Berkeley, and play ball for their California Golden Bears. At first, college ball was not easy, but Semien improved to become a sophomore and hit .328. As a freshman. Marcus started as a shortstop for the team, hitting .275, which hurt his MLB contract stock.

The Chicago White Sox selected Marcus once again during the sixth round of the 2011 MLB Draft. He kicked off his career in 2011 with Class A Kannapolis Intimidators. During the end of the 2011 season, Marcus had managed .253 in 229 at-bats. He also recorded 15 doubles, two triples, three home runs, 26 runs and three stolen bases. His achievements pushed him to Class A-Advanced Winston-Salem Dash in the 2012 season. Marcus proved his abilities with .273 in 418 at-bats with 31 doubles, five triples, and 14 home runs. Wait, did I forget to mention 59 RBIs and 11 stolen bases? In the 2013 season, Semien became the White Sox #8 prospect. On September 3, 2013, he signed a contract with The White Sox. Marcus made his first appearance against the New York Yankees on September 4. He recorded his first hit, a single, with his first bat against CC Sabathia. Semien managed his first major league home run against the Toronto Blue Jays on September 23.

Following the 2014 season, the White Sox traded Marcus along with Chris Bassitt, Rangel Ravelo and Josh Phegley to Oakland Athletics . Marcus began as the team’s starting shortstop in the 2015 season. His performance was not that good as he committed major-league-worst 35 errors and 18 throwing errors. At the conclusion of the 2015 MLB season, he recorded .257 AVG, 15 home runs and eleven stolen bases. The Athletics then brought in Ron Washington to work with Semien on his defence.

Marcus improved during the 2016 season, having committed 21 errors only and had the highest number of assists totalling 477. His improvement was noted at the plate after finishing second with 27 home runs, battled 238 with ten stolen bases. However, Marcus was placed on the 10-day disabled list after suffering from a wrist fracture that required surgery on April 17, 2017. At the end of the 2018 season, Semien was nominated for the Gold Glove award at shortstop in the American League. Marcus had batted .255 with 15 home runs and 14 stolen bases. He also managed to lead in the major league in assists that totalled 459.

Marcus improved more during the 2019 season after batting .285/.369/.522 with 33 home runs. In addition, he had the most plate appearances of 747, leading the major leagues. Marcus’ improvements grabbed more attention, and he was named to the inaugural All-MLB second team at shortstop. Marcus Semien also finished third in voting for the American League MVP that saw him nominated for the Gold Glove again. Semien recorded 53 games at Athletics and smashed .223/.305/.374 with seven home runs, nine doubles and 23 RBIs.