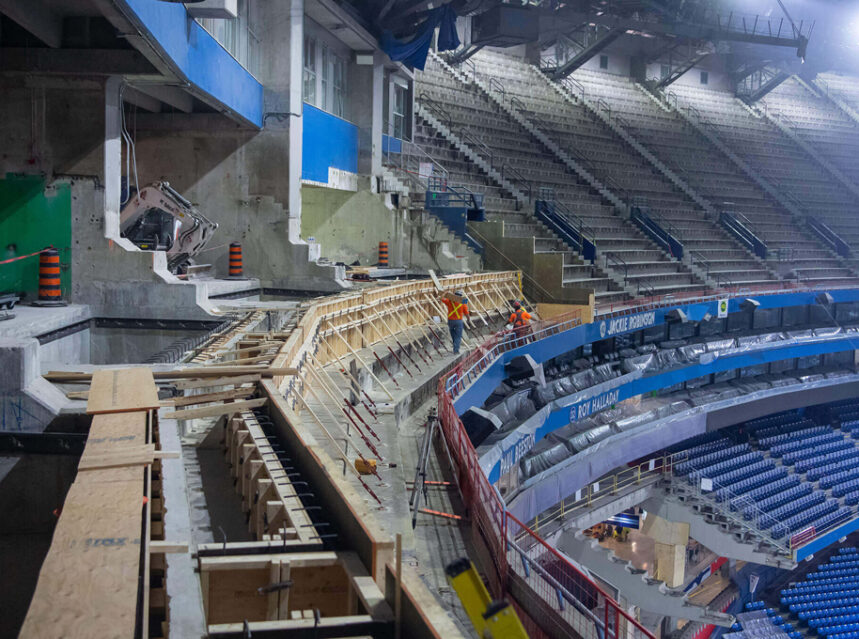 TORONTO, January 17, 2023 – Today, Toronto Blue Jays fans received an email update on the $300 million outfield renovation. The images of Phase 1 (to be completed by start of 2023 season) of the ongoing construction along with the renderings of the fully completed plans are rather impressive, and Blue Jays officials say the renovation progress is swift and on schedule.

Once complete, the renovation of what the Jays are calling the new outfield district, includes five differentiated experiences to align with the unique interests of Toronto Blue Jays fans. Through district themes, new menu offerings, updated décor, and new close-to-the-action vantage points each “neighbourhood” will be available to all ticketed Jays fans.

The five neighbourhoods are named: The Catch, The Stop, Corona Rooftop Patio (with glorious views of the CN Tower when the dome is open), Park Social, and theWestJet Flight Deck. They allow for unique social interaction and some areas will offer other distractions like interactive games to explore during breaks in field action or even while the game is in progress.

Sleek and modern, The Catch Bar sits above the visitors raised bullpen offering views of the ballpark like never before. Menu highlights include craft cocktails and trendy food bites such as mac and cheese with Montreal smoked meat, Cuban sandwiches, and brioche pretzel bites.

Described as your neighbourhood bar to grab a drink with friends ahead of the first pitch, The Stop is an ode to stadium history, sitting behind the batter’s eye in a space originally planned as a transit stop, showcasing the many different neighbourhoods which Toronto’s transit system runs through. Menu highlights at The Stop include diverse food offerings and quick drinks including Jamaican beef patty, banh mi sandwiches, and signature batched cocktails.

A new rooftop patio oasis located in the 500 level of right field and situated beneath the CN Tower, The Corona rooftop will all fans to become a part of Toronto’s skyline in the highest section of Rogers Centre’s iconic rooftop. Toronto Blue Jays say menu highlights include “everything fans want in a summer patio menu, headlined by the full Corona family of products, plus frozen cocktails and modern takes on ballpark classics.”

Located at the 500 Level left field side, Park Social is described as a “park within the park for fans of all ages featuring games and comfortable places to hang out.” It will be a casual, open-air space where the best of Toronto’s parks are brought into the ballpark.

Situated at the 200 Level in centre field, the WestJet Flight Deck will have a new brewery-style motif with new food and drink options. Ballpark classics with innovative options like smoked BBQ brisket sandwich, jerk chicken nachos, and specialty flavoured popcorn. It can also play host to group events from 50-300 people.