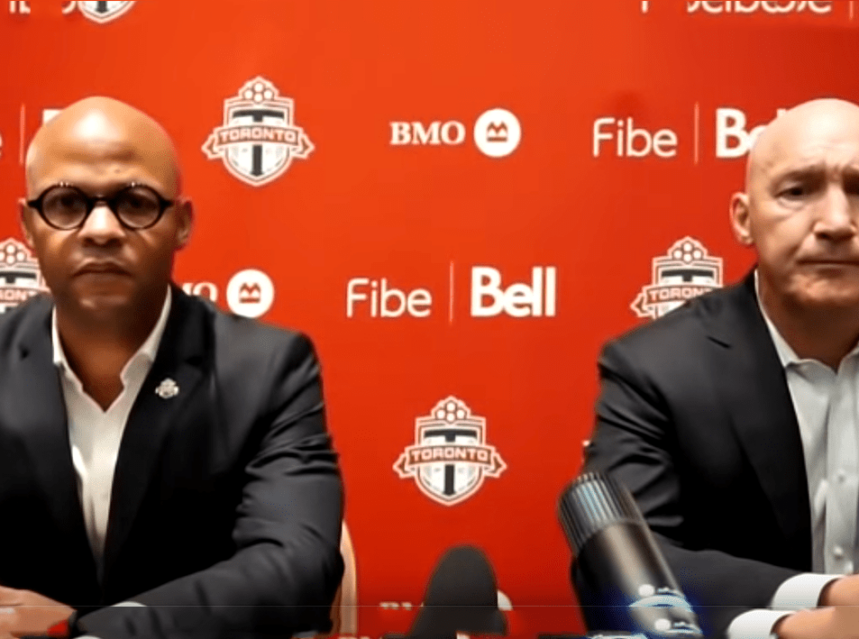 After Toronto FC fired head coach Chris Armas on Sunday – which came after a 7-1 drubbing at the hands (or feet) of D.C. United, marking TFC’s sixth straight loss – the Reds bounced back with a hard-fought 3-2 victory over Eastern Conference-leading New England Revolution.

Assistant coach Javier Perez was at the helm to help claim the victory at Foxborough continuing the team’s six-game undefeated record (3-0-3) with New England dating back to September 2018.

“I think this is a very very important win, not only for what just happened this past week but as well it’s been extremely tough for many of the players,” said Perez. “It’s tough to be away from home, away from their families. And it was very important to put together a good performance, not only to win but to put together a good performance, to believe again in us,” added Perez.

After the match, New England remain high atop the Eastern Conference Standings with a 7-3-3 record while the conference is book-ended by TFC dwelling in the basement with a 2-2-8 record.

Of course, the team is hoping to turn things around and defeating the Revolution is the first positive step.

“It’s been a difficult 18 months and then particularly it’s been difficult the last six months,” said TFC General Manager Curtis. “Since Chris took over it’s been an unbelievable time having to move the team to Orlando and all the different variables that the club has had to manage through on the field and off the field.”

“I think what happened here is a system and style of play that had been in place for a long time with the current roster has had a very difficult time changing to a new coaching staff and style of play,” said Curtis.

“That being said the results drive our business and results weren’t there,” he added. “We felt we needed to go in a different direction.”

The results just have not been there: winless in seven, six-straight defeats, culminating in Saturday’s 7-1 humbling away to D.C. United.

“The way we have been losing, especially since returning from the three-week break has been very difficult to watch,” said Manning. “And when you see a team concede like we did yesterday, we just saw no way back outside of making the coaching change.”

“We are expecting this roster to play better than they are and so we are going to challenge whoever comes in to provide that spark for this group of players who do know what it takes to win,” emphasised Curtis.

TFC will now have ten days before the next game on July 17 against Orlando City SC.

by Terence Lankstead with notes from Toronto FC