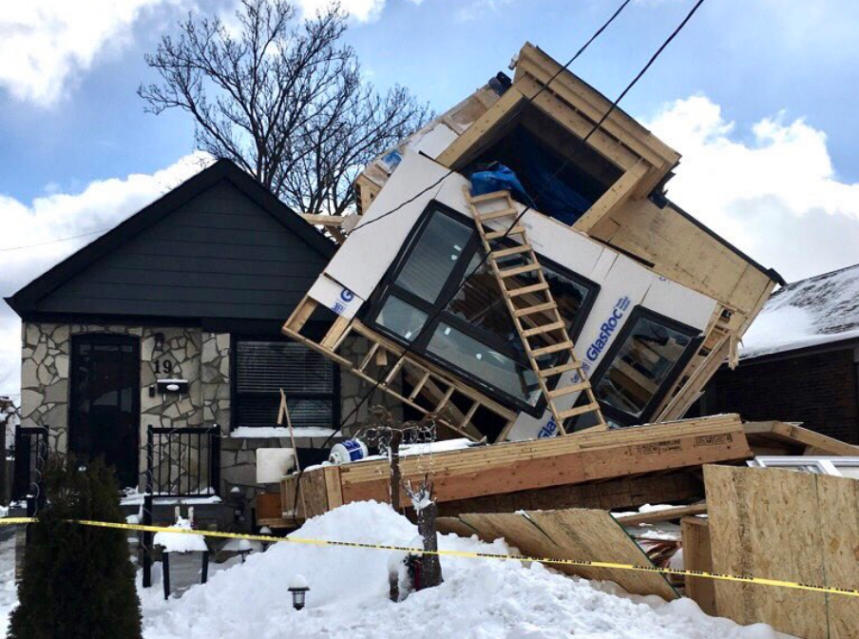 A Toronto house under construction collapses on Homeview Avenue in Toronto’s Jane and St. Clair Avenue area collapsed yesterday at about 2:20 pm according to Toronto Fire Services.

The house had the main structure and windows in place but gave way and fell onto a neighbouring home. High winds are suspected as the cause of the collapse but the scary incident remains under investigation.

Neighbours say the homeowner next door was there when the collapse happened just after 1 p.m. according to a CTV News report.

“He was just shovelling snow and he heard something fall and he looked back and saw the house completely collapsed over,” Sandy Da Cunha, who lives on the street, told CP24.

Toronto Fire Services has reported that no one was injured although Da Cunha said that a couple and their two-year-old daughter live in the home that the house fell on, adding that the incident has left the family “shaken up”.

Speaking with CP24, the project’s safety inspector said that two construction workers were actually inside the building before the structure came crashing down.

They heard a crackling and then a window breaking and started yelling to get out of the house, which they proceeded to do frantically. And then just like in a movie thriller, the house collapse just as the workers got to safety.

According to Environment Canada, winds were reaching speeds of up to 60 kilometres an hour at the time of the incident, suggesting that strong winds caused the collapse of the building site.